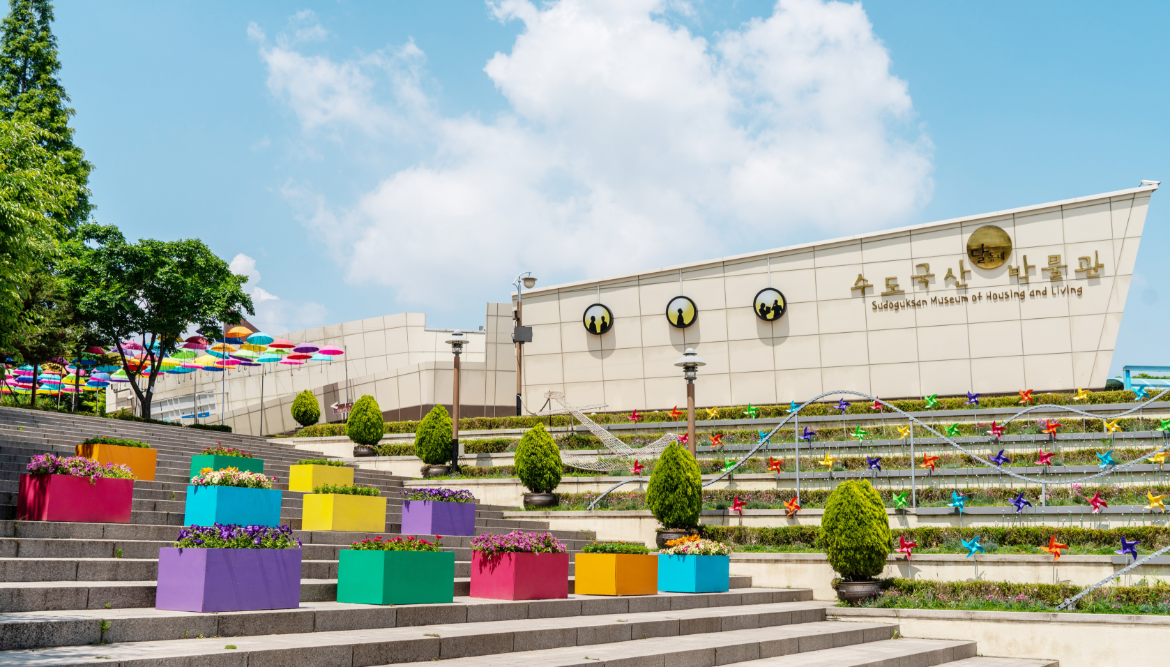 For old-youngs who have interests in oldies, it can be a good location,
but the middle-aged will show much more interests.
When I visited this Museum,
I thought it would be a good place to come with parents. 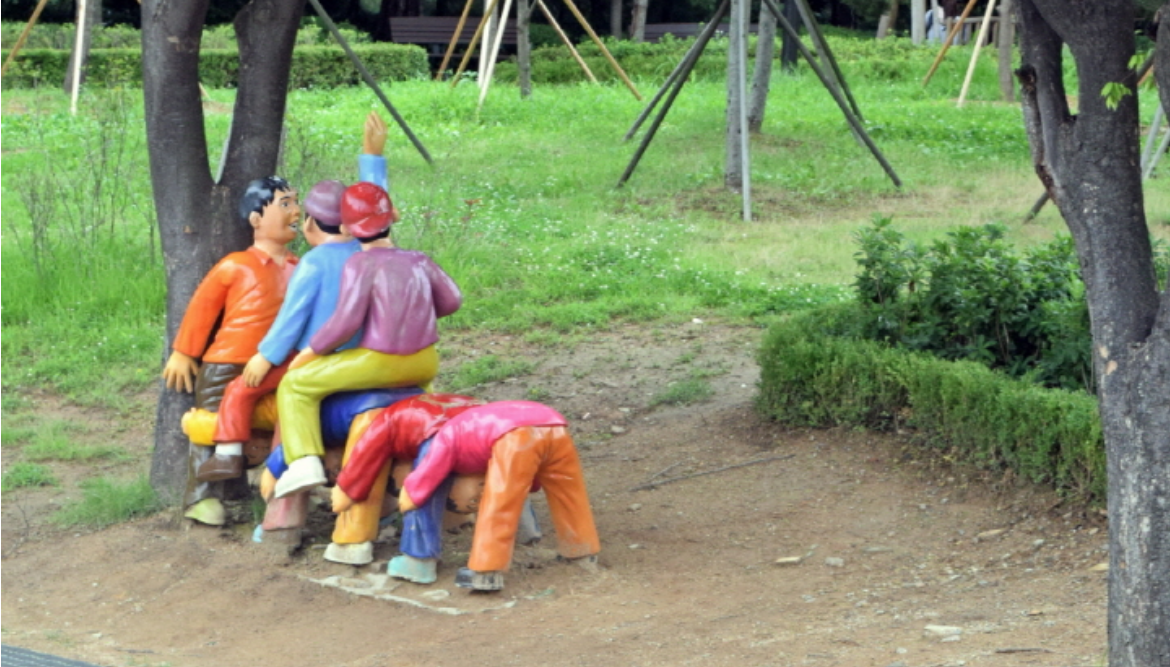 In short, the Museum especially shows the livelihoods of Incheon in 1960’s and 70’s. Dong-gu office of Incheon,
which missed the disappearing trace of ordinary people’s livelihood in a shantytown, built a museum on the site of the poor village. They wanted to establish a place where the old generations can recall the savor and memory of the past and the young can feel the life of the elderly. They hoped it could be a link between the generations.
It opened in autumn, 2005. Compared to other Museums, it is a small-scale one: one-story building with a basement. But the contents are quite meaningful. About 30 minutes’ length of tour is rewarding. You should have at least one hour, if you plan to do something at an experience zone outside the Museum. Visitors can play some games which they did as a kid: sand play, hopscotch, biseokchigi (playing with flat stones), jump rope, merry-go-round on a cart, slap-match, game with marbles, a game of yut (playing with sticks called yut), and dice play. The Museum shows old animations as well. 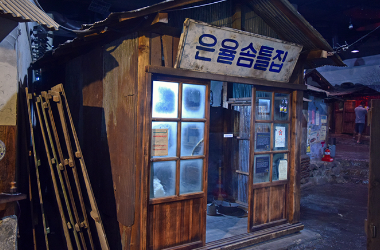 Getting off at Dong-Incheon Station of Line No.1 and taking a walk about 7-8 minutes to Songhyun Neighborhood Park, visitors encounter a steep hill. At the end of the hill, the Museum is situated. Sudoguksan Mountain means a mountain in which sudoguk (the water department) is located. Long time ago, people called this mountain as Mansusan Mountain or Songlimsan Mountain. Since the water bureau was installed at the early of 20 century, they began to call it Sudoguksan Mountain. How on earth can a village form in a relatively small mountainous area? The residents were the displaced by Japanese and Chinese during the Japanese colonialism. 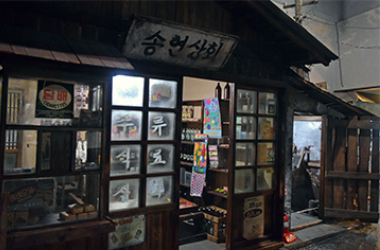 Since the 1950s, Sudoguksan Mountain had become home to ordinary people. Refugees gathered here during the Korean War. Along with the industrialism in the 1960s, many people from across the nation flocked together. At its peak, more than 3000 households were living in this small area. From the foot of a mountain to the peak, small houses covered the area. That was the beginning of the “shantytown” of Incheon. 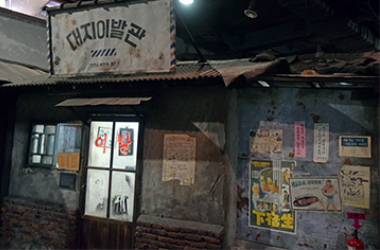 There are two theories on the origin of the term, “Daldongne (shantytown).” One is based on the fact that the village located so high that residents could look dal (moon) closely. The other focuses on a fact that most of the people paid for dalse (monthly rent). But one thing is for sure: a big hit TV drama, “Daldongne” in 1980s had a great influence on the term. 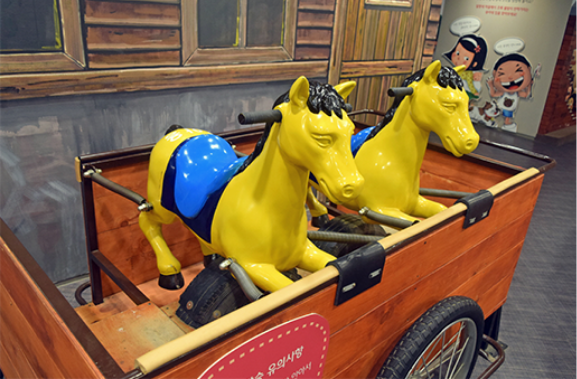 The Museum has a lot of space and props that looks like a filming site of the drama: a dark alley, a movie poster on a shabby wall, mom and pop stores, realtors, academic institutes, briquette stores, barber shops, comic-books’ stores, coffee-shops, beauty-salons, photo studios, houses, common tap and toilets, and more. They are all realistic. Each space has proper props so that visitors can guess the livelihood of that time. 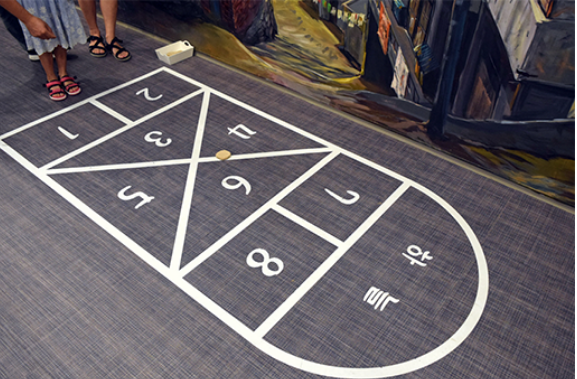 Their tough life should not be a fun, but taking pictures with the backgrounds of such life-styles would be a joy. It is an attractive place to spend time with the beloved. But it would be good practice to take parents to their emotion. 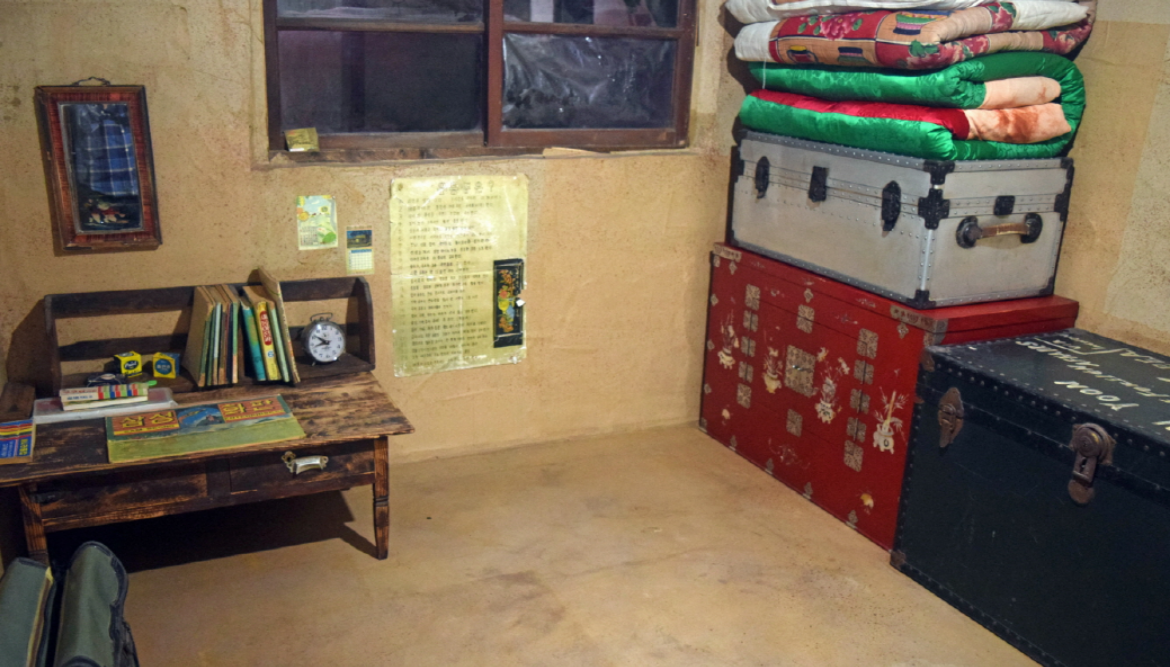 There were many children with their parents. Maybe they were brought to here for an education side. Some showed interest in strange space and props. But most of them had scared look. The odd things that they had never seen before must have been uncomfortable. For some of them, the Museum is a haunted house. What a cute! 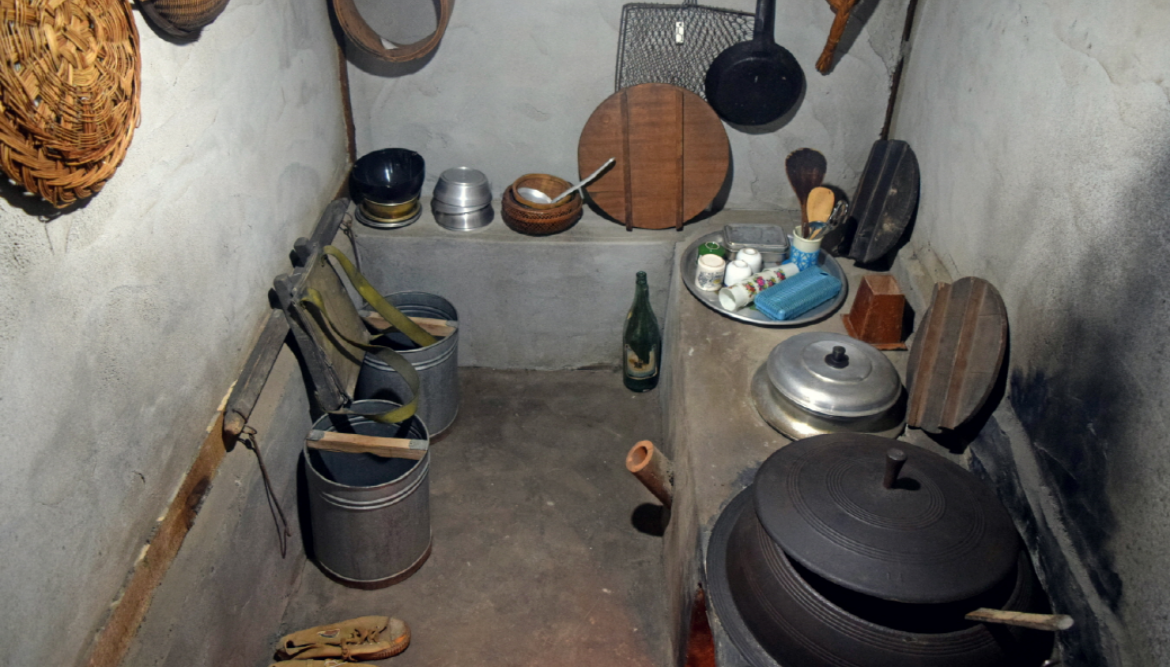 Scared kids’ whisper echoed everywhere. “Mommy, I’m scared. Did you live in a place like this?” “Not me. People who are older than me did.” It was obvious that the kid is low grade in elementary school, and his mom is in her late 30s at most. For the kid, the era that the Museum represents is too distant. Unlike the 1980’s and 90’s which are often viewed on TV, 1960’s and 70’s are relatively rare. 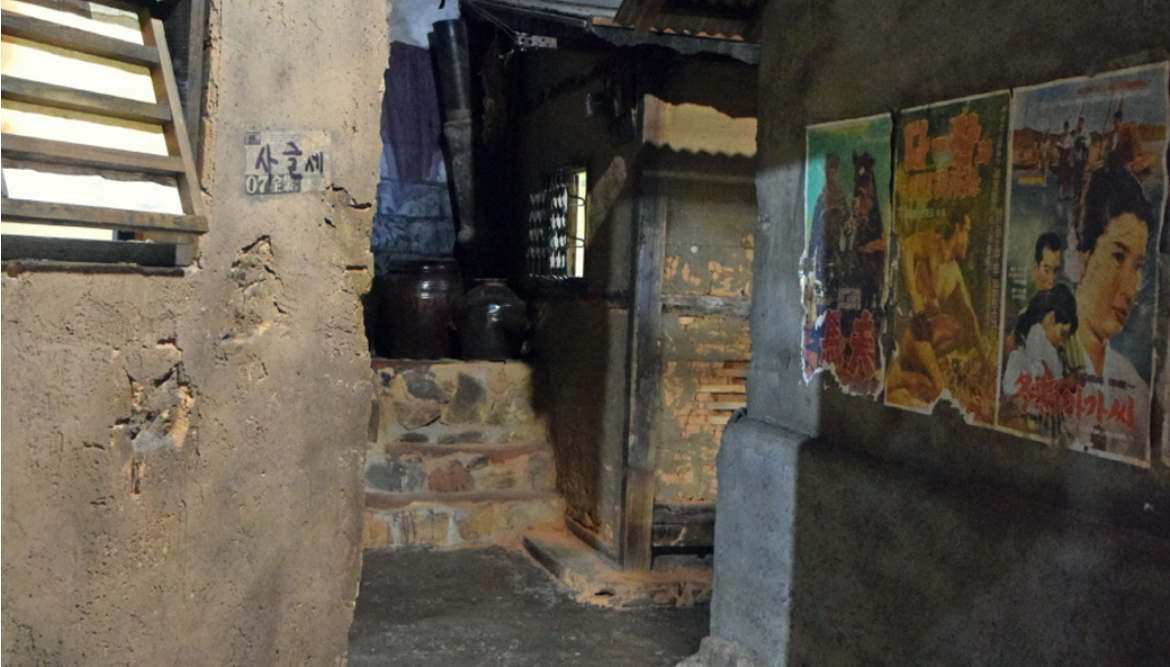 The Museum can offer parents an opportunity to enjoy memories and nostalgia for a while. For the young, it also has a meaning of indirectly experiencing their childhood and youth. For young couple, it can be a good place for their meeting, and for parents having little children, it can be an informative location to show them how Korea and Incheon was 3 or 4 decades ago. 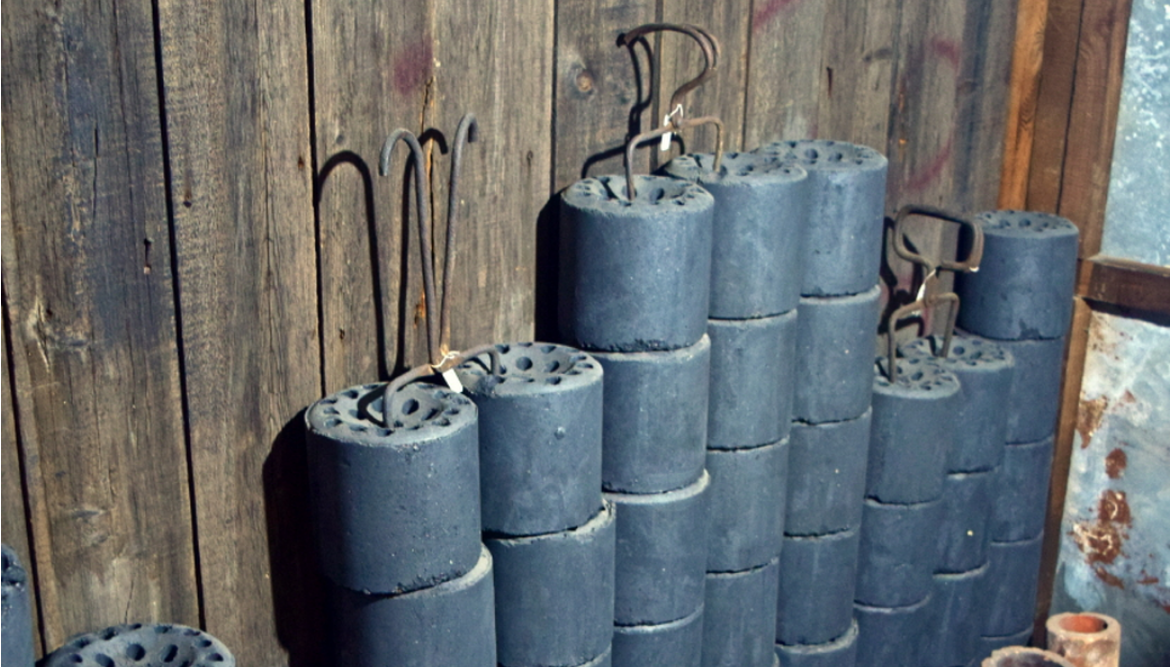 By telling the recent past to young generations and foreign tourists who only know modern Incheon like Incheon Intl’ Airport and Songdo New City, it can be a new attraction.Beyond an exhibition, the Museum employs various experience and education programs to ensure that the trip to the Museum is worthy. Though souvenirs can be poor in terms of quality, meeting them again can be another unique charm of the Museum.