Incheon has intangible cultural property with historic and artistic value as well as tangible ones. Here are some Intangible Cultural properties which cherish our own style, fun and narration of life. 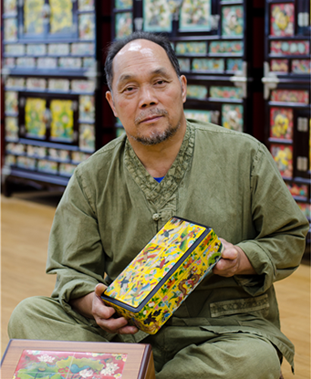 Namdong-gu: Hwagakjang, Yi Jae-man (Important Intangible Cultural Property No. 109)
“Hwagak” is a transparent plate made from ground ox horn.
A “hwagakjang” is an artisan making objects with hwagak. A paper-thin ox horn plate is crafted and a pattern will be drawn on the back of it. Such items are colored and painted. And then they are applied to lacquer-ware.
The traditional craft technique has been used for furniture and household items: gyeongsang and yeonsang (small tables); beoseonjang (chest for beseon, Korean socks); 2-, 3-, and 4-tiered wardrobes; sabangtakja (book and display stand); mungap (stationary chest); ham (boxes); chimseongu (equipment for making clothes and ornaments); spools; rolling pins; rulers; sewing boxes; fine-tooth bamboo combs; pillow ends, fans, and more.

Ganghwa-gun: Seohaean Baeyeonshingut and Daedonggut, Kim Geum-hwa (Important Intangible Cultural Property No. 82-Na)
It is a popular shamanistic exorcism ritual to the gods to ask for abundant catches at sea, which takes place Ongjin-gun and Yeonpyeongdo Island. There are two kinds of rituals: individual batgut (personal ceremony) and maeulgut (common ceremony). 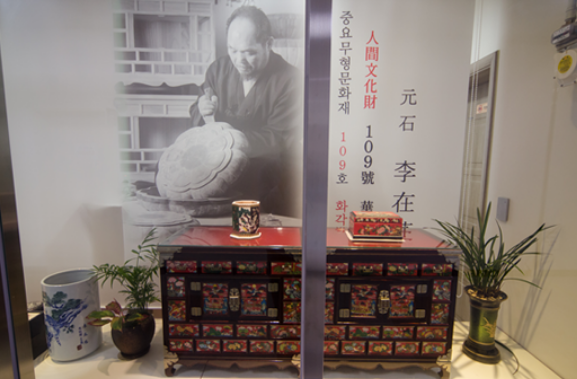 Baeyeonshingut is only for ship owners. The owners have to prepare and burden the cost for the rite. Only the ships’ crew can participate in the service. A ritual held by a wealthy ship-owner can be bigger than the common ceremony for a village. But it has nothing to do with the village. It is only for the safety and good catches for the owner’s ships.
Daedonggut is a common ceremony on the basis of a village. Through a community meeting, a shaman is selected, the process is discussed, and the cost is shared with village people. It is performed with a prayer for peace in the village and a good catch.
Ganghwa-gun: Wanchojang, Yi Sang-jae (Important Intangible Cultural Property No. 103)
Wancho crafts, weaving a line of latitude and longitude of nature in life 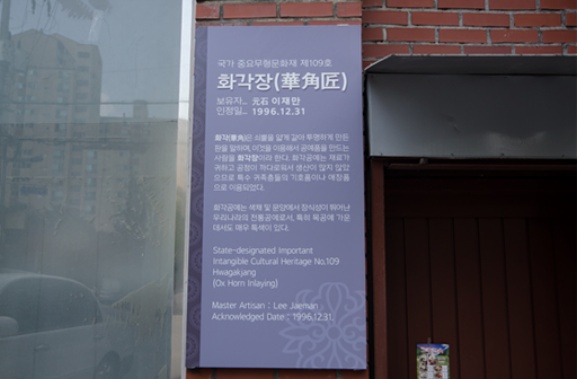 Wanchojang is the traditional Korean art of creating mats, sitting cushions, and boxes from woven sedge. Wancho is tall flat sedge. It is also called hyeonwan, seokryongcho, or ryongsucho. It has been a common material for household goods like mats, sitting cushions, sondongi (small baskets), and boxes. The products made by masters had been highly prized by the upper classes and become an important element of storing grains or sacrificial ceremonies. Sedge, a common material for household goods, dates back to the era of the Three Countries. There is a record in Samguksagi, a history book about the three Countries, which mentions a special organization in charge of making and providing Wanchojang for royal families. In Joseon Dynasty, it was important trading goods. It was also given as tribute to other nations. Because of highly artistic quality, Wanchojang was so popular that masters had difficulties meeting the demands.
Dong-gu: Hwanghae-do Pyeongsan Sonoreumgut, Yi Seon-bi (Important Intangible Cultural Property No. 90) 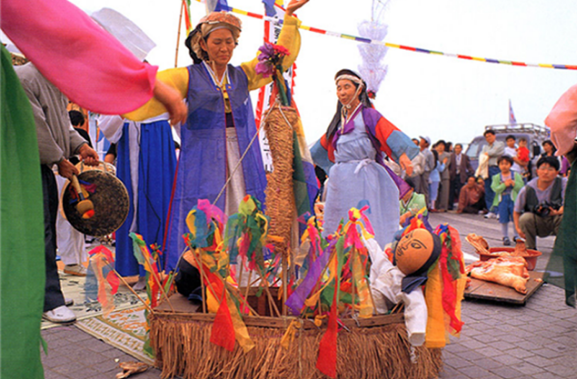 Hwanghae-do Pyeongsan Sonoreumgut (Shamanistic Ox Performance) is one of the guts for luck in the region. The ox performance ritual is performed for good harvest, trade prosperity, and flourishes for generations with chilseongjeseokgeori, the biggest shaman song. It is both ritual and play with the element of entertainment and artistic value. Sonoreumgut was firstly reproduced by a female shaman, Jang Bo-bae (1915 – 1991), a native of Pyeongsan, Hwanghae-do at Incheon Center for Korean Traditional Performing Arts in August 1985. Since then, it has annually presented to the public. On the occasion of receiving the runner-up prize at the National Folk Arts Contest, Sonoreumgut was designated as the Important Intangible Cultural Property No. 90 on August 1, 1988.
Yi Seon-bi held the farewell ceremony of Sonoreumgut at a hall for gut at Munkaksan Mountain in Munhak-dong, Nam-gu, Incheon, Apri 17 -18, 2011. Through this ritual, she bid Gods her retirement form the post and left it to her disciple, Kim Hye-suk. They say the farewell gut holds the female shaman, Yi Seon-bi’s will to preserve the tradition of Sonoreumgut.
Bupyeong-gu: Gungsijang, Park Ho-jun (Important Intangible Cultural Property No. 47) 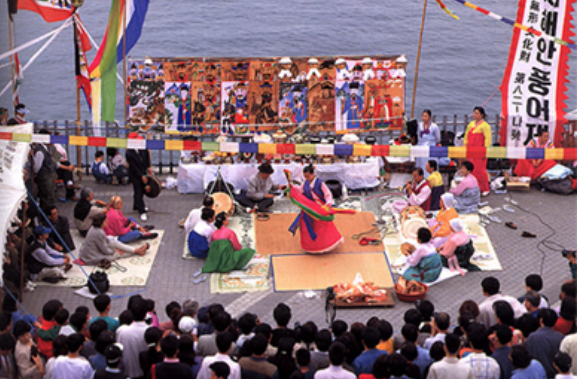 Gungsijang means the technology of making bow and arrow or a master of making them. Bow maker is called Gungjang, and arrow maker, Sijang. The arrow has 6 different kinds: mokjeon (wooden arrow); cheoljeon (iron arrow); yejeon (arrows used at archery contest during a party hosted by Kings); pyeonjeon (small and short arrow); youyeopjeon (arrow whose heads look like willow leaves); and more. The main materials are bushclover woods, bamboo, iron, tendons, feathers, skins of peach trees, glue, etc.
Master Park Ho-jun, who was designated as Gungsijang, is Sijang. His grandfather, Park Hee-won was a soldier who passed the military service examination during the reign of King Gojong of Joseon Dynasty. He wasn’t satisfied with the arrows provided by Gungigam (ordnance supply office) and made arrows that were fit him for himself. His father, Park Sang-jun (1914 – 2001) inherited the family business at 17, and devoted himself for arrows about 70 years. He became the first Gungsijang in 1978.
Jung-gu, Cha Buhoi and Namdong-gu, Park Il-heung: Eunyul Talchum (Important Intangible Cultural Property No. 61) 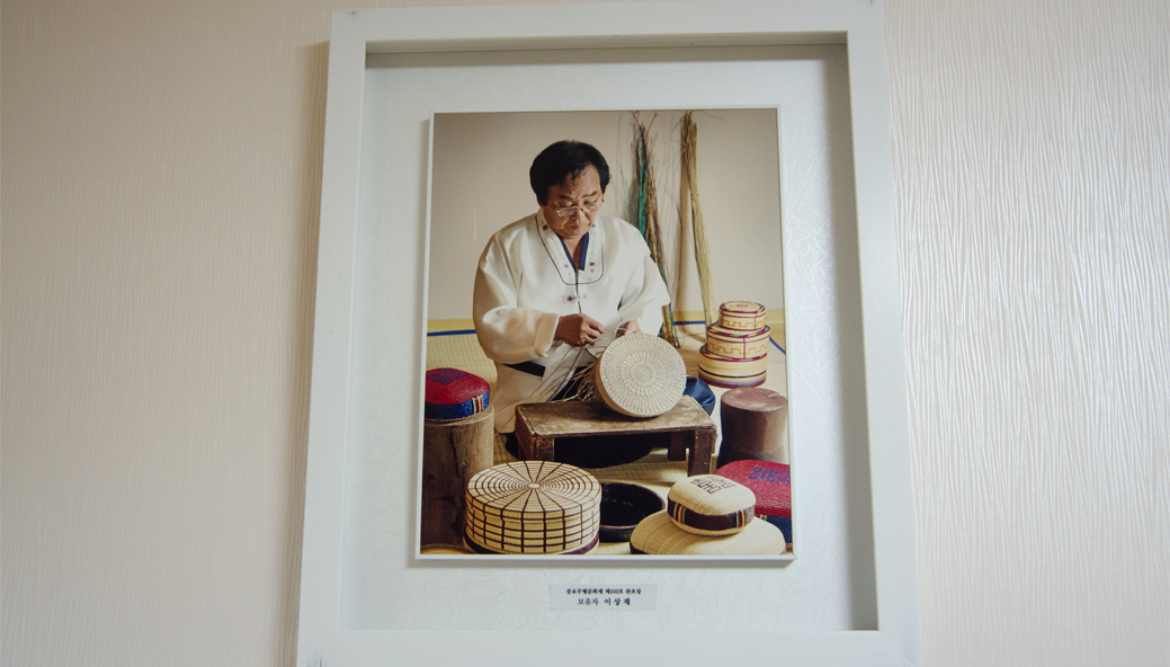 Eunyul Talchum is a mask dance, which has been handed down at a market-place of Eunyul-eup, Eunyul-gun located at the west rice-field of Hwanghae-do, present North Korea. It was designated as the Important Intangible Cultural Property No. 61 in 1978. It was reproduced by performers who had defected North Korea during the Korean War. The center for Eunyul Talchum is situated at Subong Park in Nam-gu, Incheon.
Visitors can meet more intangible cultural properties like Mokjogakjang (Wood Sculpture), an Incheon intangible cultural property, shore and boating songs at coastal areas (Incheon intangible cultural property No. 3) and more at Training Center for Intangible Cultural Property in Munhak-dong.