The sound of the wind chimes hanging from the roof breaks the silence. The world beyond is a sea of green trees and blue waves that tease the shore. Here, you do not have to enter the heart of the mountain to search for old temples. Merely visiting these small and large temples in Incheon is enough to stop your steps and fill your heart with calm.

This is the oldest Buddhist temple in Korea. Founded in 381 (11th year of King Sosurim’s reign of Goguryeo), Jeondeungsa Temple has more than 1,600 years of history. It is located in the Samnangseong Fortress of Jeongjoksan Mountain, a fortress said to be erected by the three sons of Dangun Wanggeom, the legendary founder of the first Korean state. Jeondeungsa Temple is home to six Treasures, including Daeungjeon Hall, Yaksajeon Hall, and Iron Bell. In fact, the temple itself is one great cultural heritage. Jeondeungsa Temple is the largest temple in Ganghwado Island. In the west of the temple complex is the former site of Jeongjoksan History Archive, which served as one of the archives that contained the Joseon wangjo sillok (Annals of the Joseon Dynasty). Jungnim Dawon offers a place of refuge for the weary travelers as a hanok (traditional Korean building) cafe with a dignified air fit for tea ceremonies. Jeondeungsa Temple's temple stay program is very popular with international visitors too. 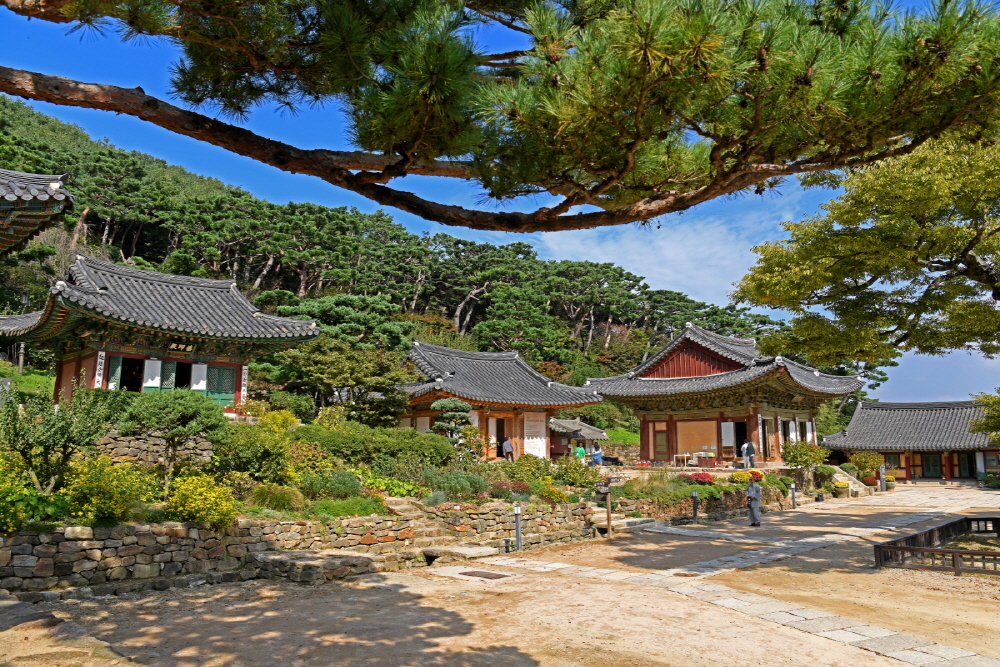 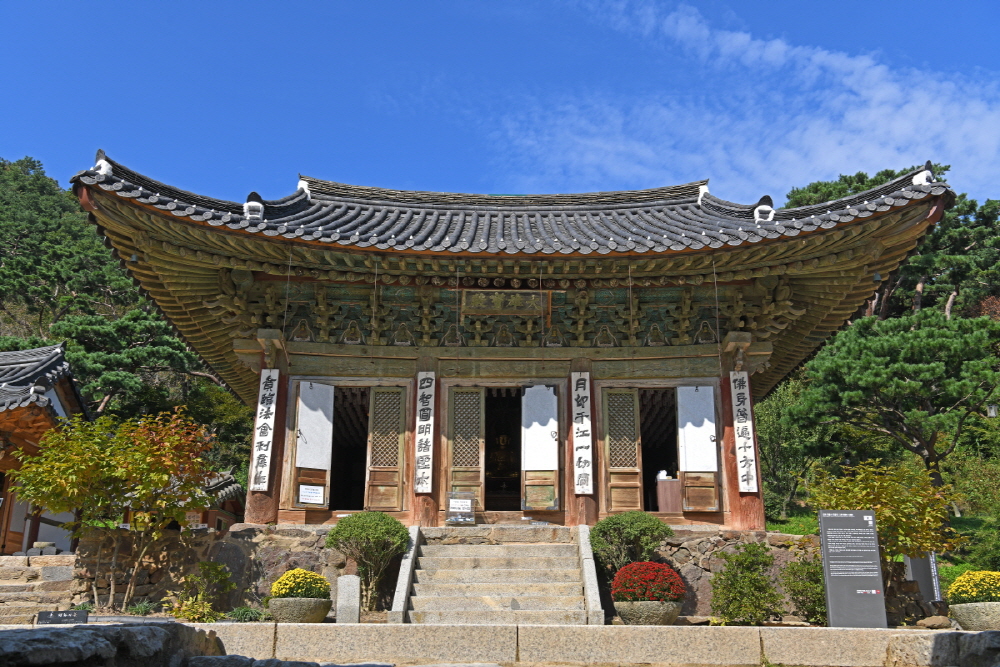 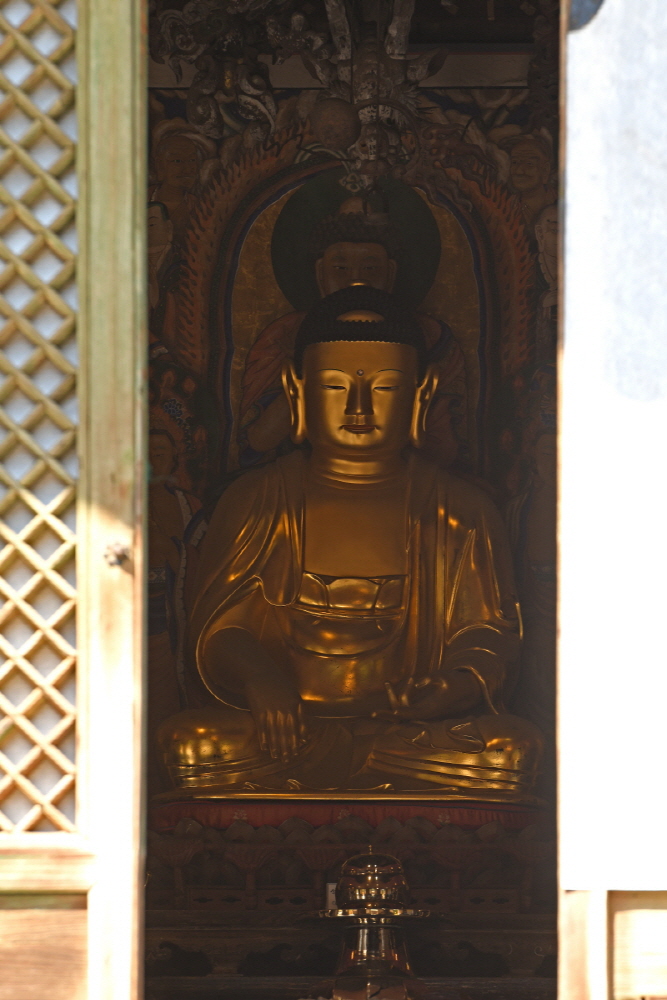 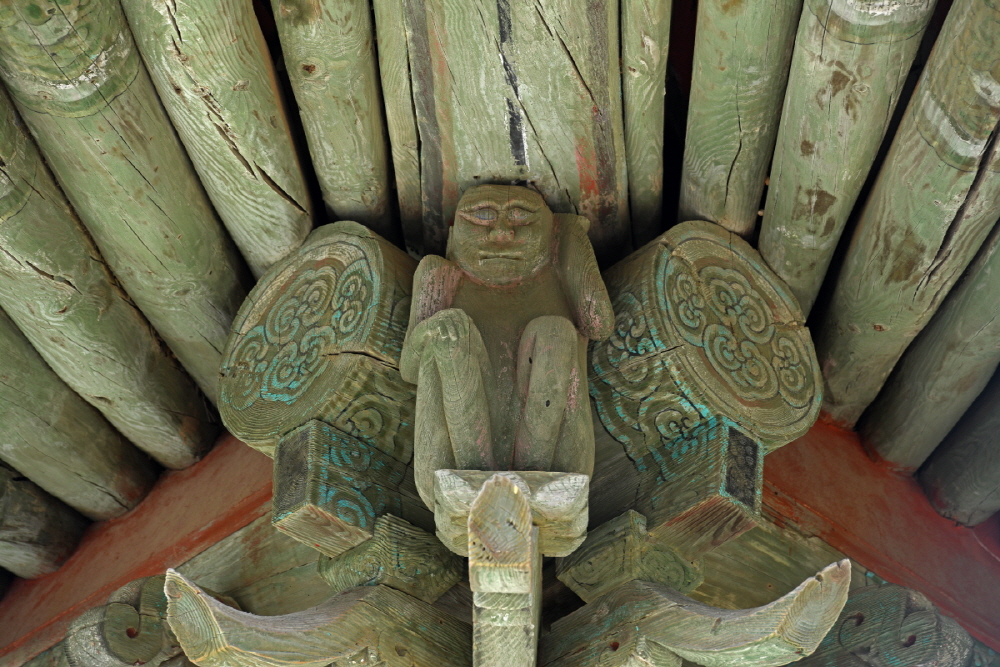 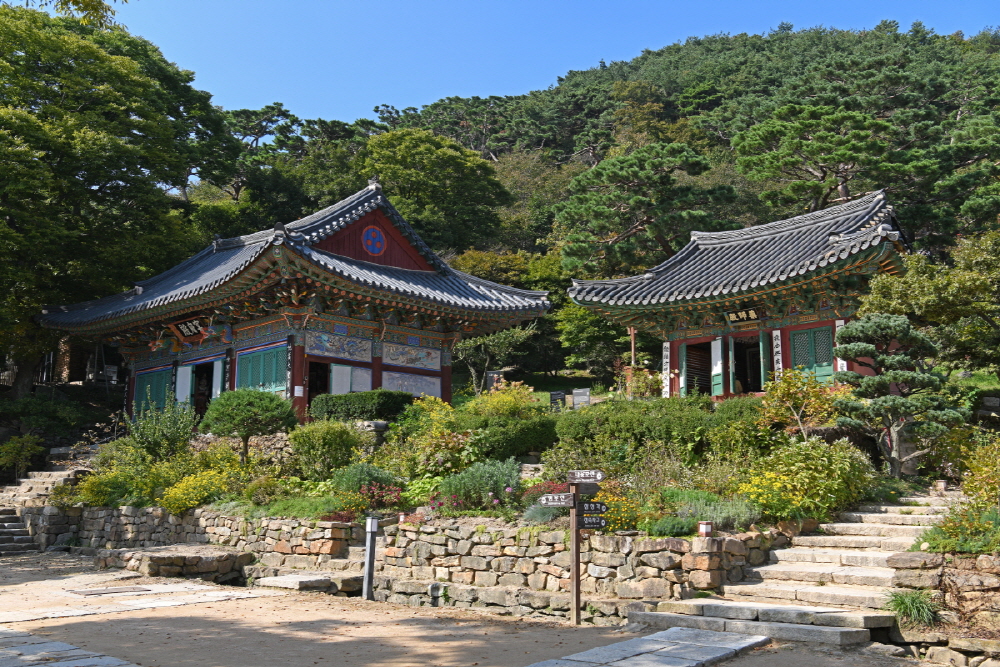 This temple is said to be founded by Buddhist monk Hoejeong in 635 (4th year of Queen Seondeok’s reign of Silla). It is one of the three famous Guanyin temples near the sea, along with Boriam Hermitage in Namhae and Hongnyeonam Hermitage of Naksansa Temple. In Ganghwa, it occupies a place of honor as one of the trio of ancient temples on the island, with Jeondeungsa Temple and Jeongsusa Temple. Bomunsa Temple is filled with things to see. A 10-minute trek up the stairs next to the Daeungjeon Hall brings you to the Rock-carved Seated Buddha (Incheon Tangible Cultural Heritage) engraved on the rock formation below Nunsseopbawi Rock at Nakgasan Mountain. This huge sculpture, standing more than 9 m in height, seems to embrace the visitors and the West Sea in its heart. The view of the setting sun from the Bomunsa Temple also draws large amounts of visitors to the temple. Bomunsa Temple's grotto is a rare example of a shrine built in a natural cave in Korea, housing a statue of an Arhat that is said to have been caught by the fishermen of the area about 650 years ago. 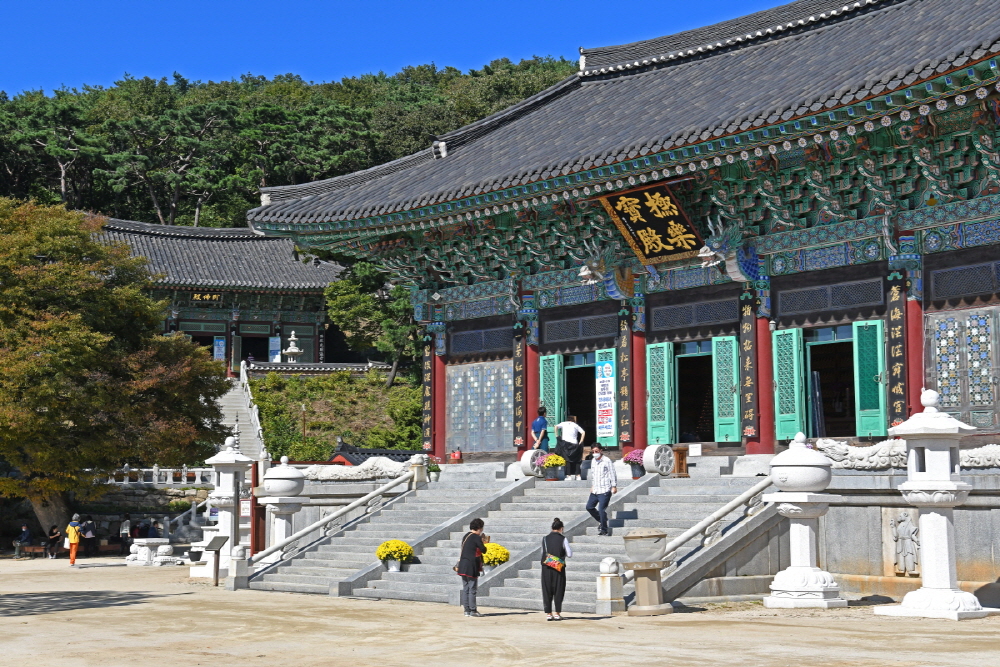 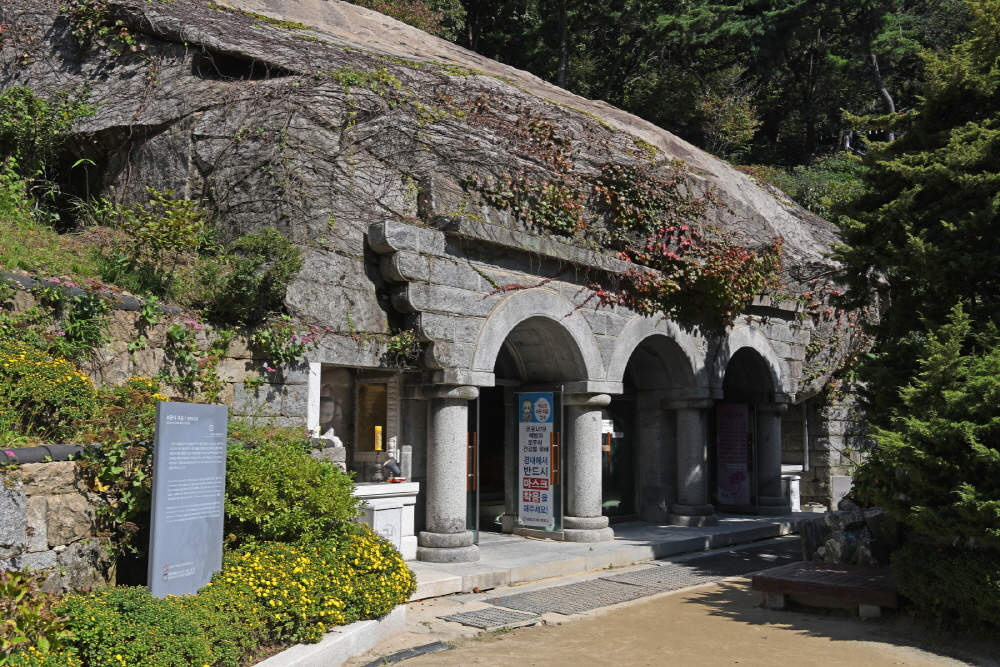 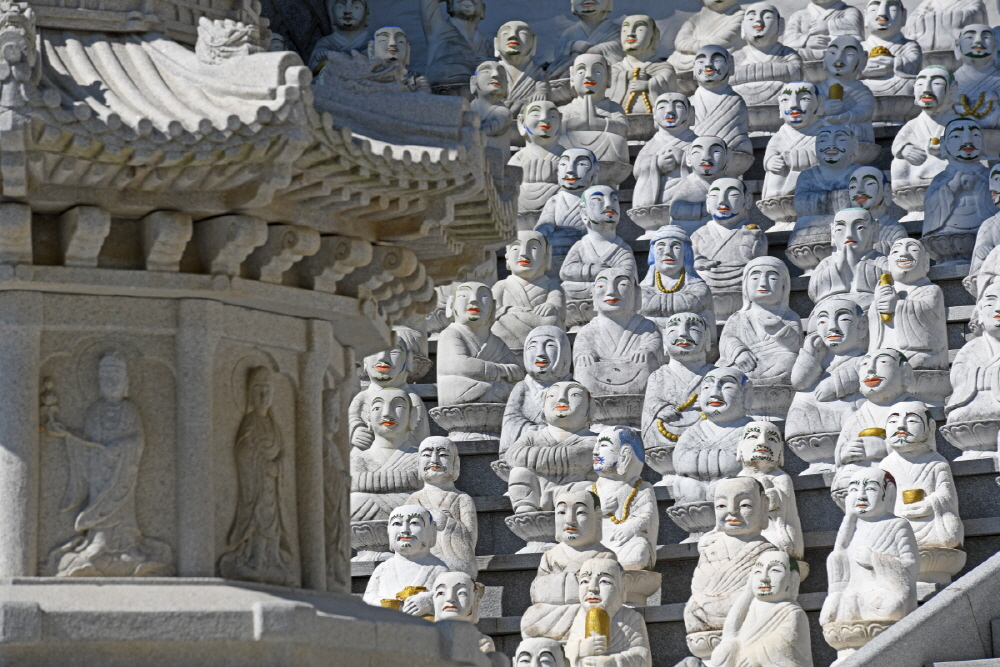 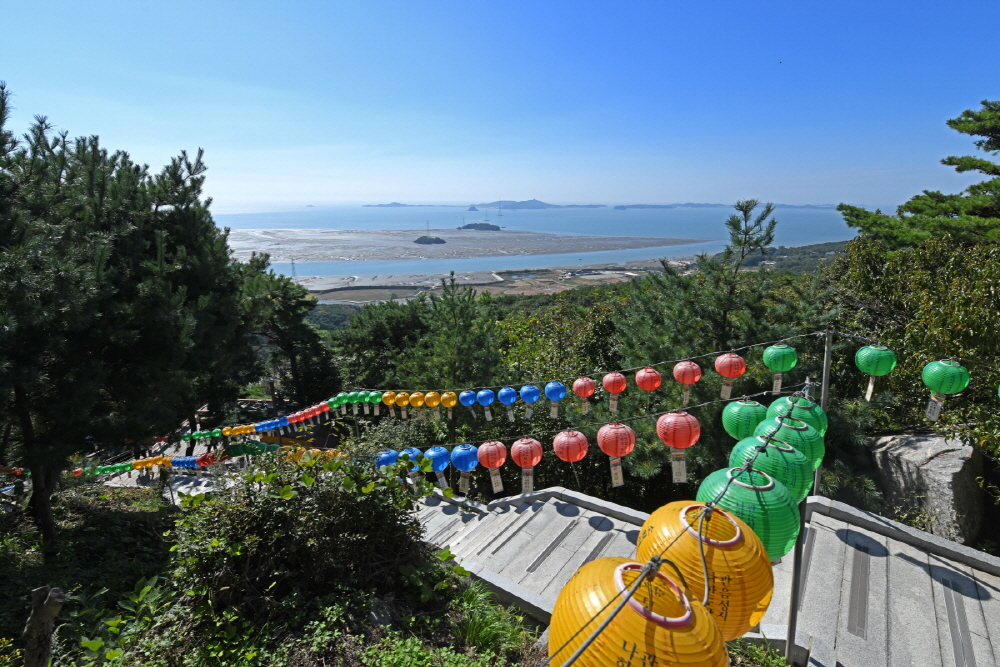 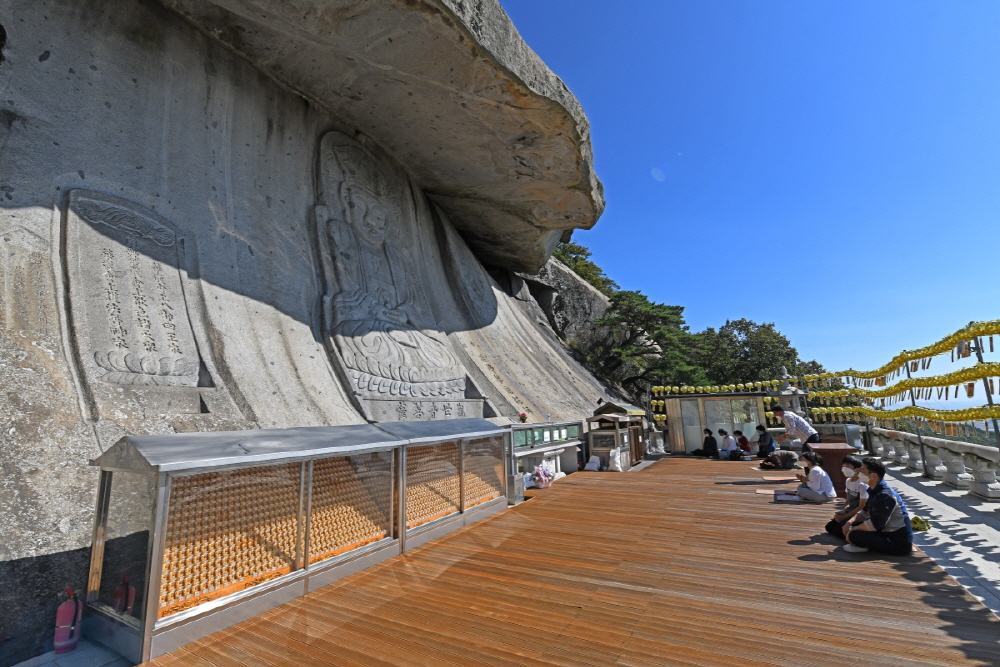 This temple is located on the northwestern side of the Baegunsan Mountain in Yeongjongdo Island. Its humble appearance belies a history of more than 1350 years, having been erected by the Buddhist monk Wonhyo in 670 (10th year of King Munmu’s reign of Silla). It was known as Baegunsa Temple and Gudamsa Temple in the past, and its present name comes from Heungseon Daewongun, who stayed in this temple while praying for his son's ascension to the throne (later to be King Gojong of Joseon). After King Gojong ascended to the throne, Heungseon Daewongun issued a hand-written hanging tablet with the name "Yonggungsa." Interestingly, the temple's name is related to the sea ("palace of the sea dragon") despite its location in the mountains. This puzzling name is said to come from a local myth, where a fisher living in Yeongjongdo Island, having found a jade statue of a Buddha in the net multiple times, decided to enshrine the statue in this temple. Unfortunately, the jade Buddha was lost during the Japanese Occupation. The temple complex is made up of Gwaneumjeon Hall, Yonghwanggak Hall, residential buildings, and an 11 m-high Maitreya Buddha. The complex is home to a pair of trees known as "grandma and grandpa trees," two Zelkova trees that are said to be nearly 1,300 years old. 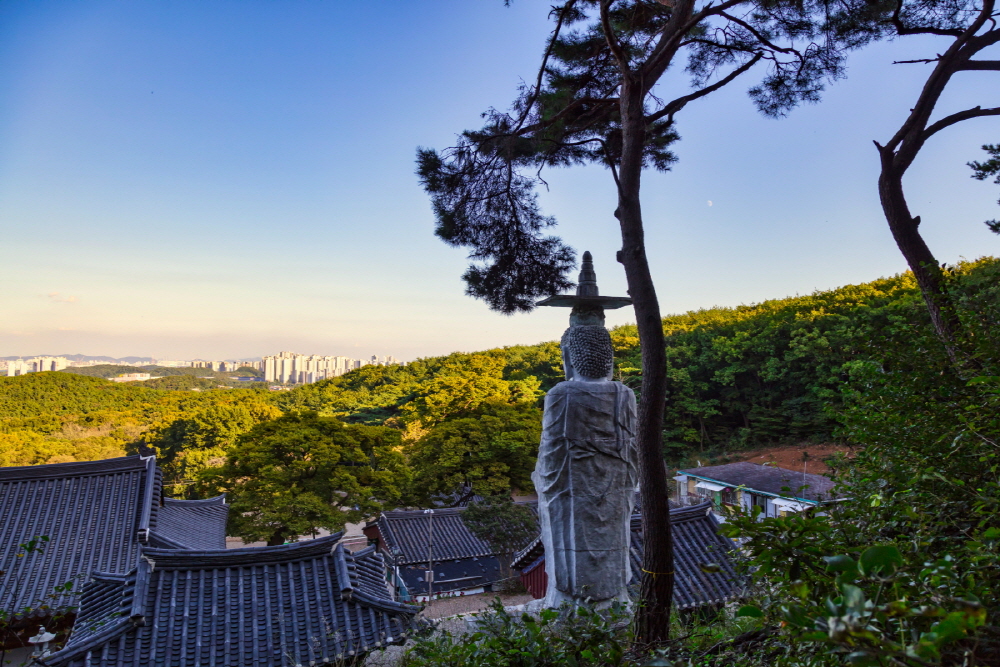 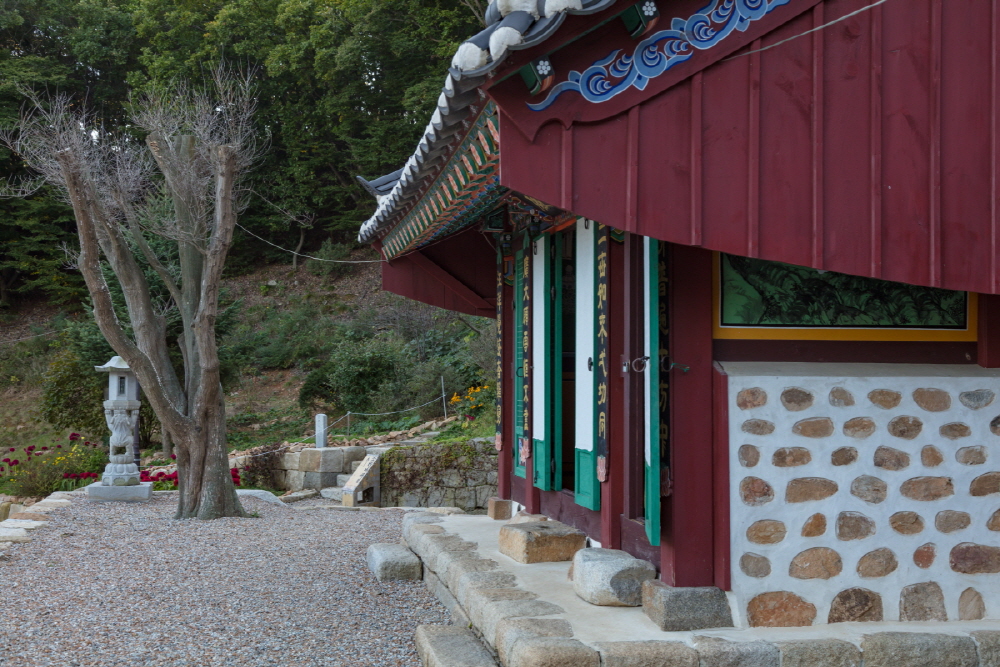 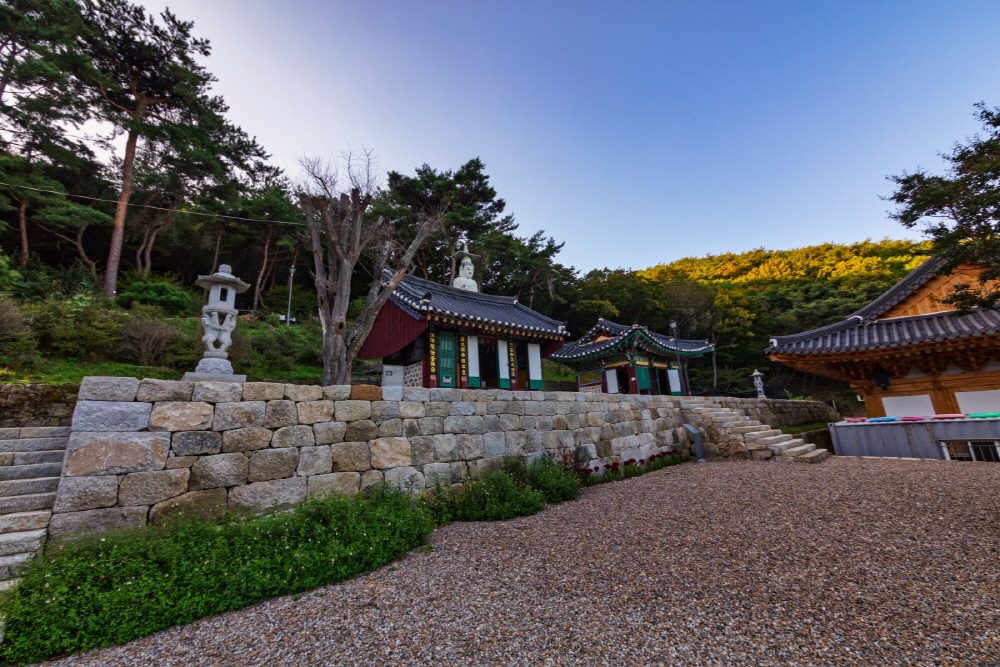 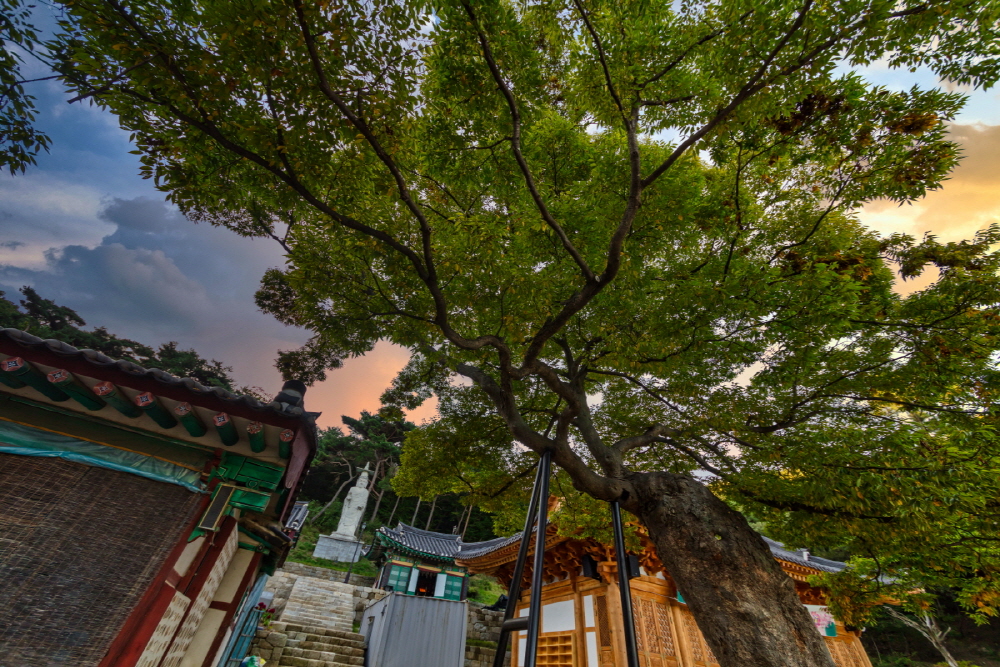 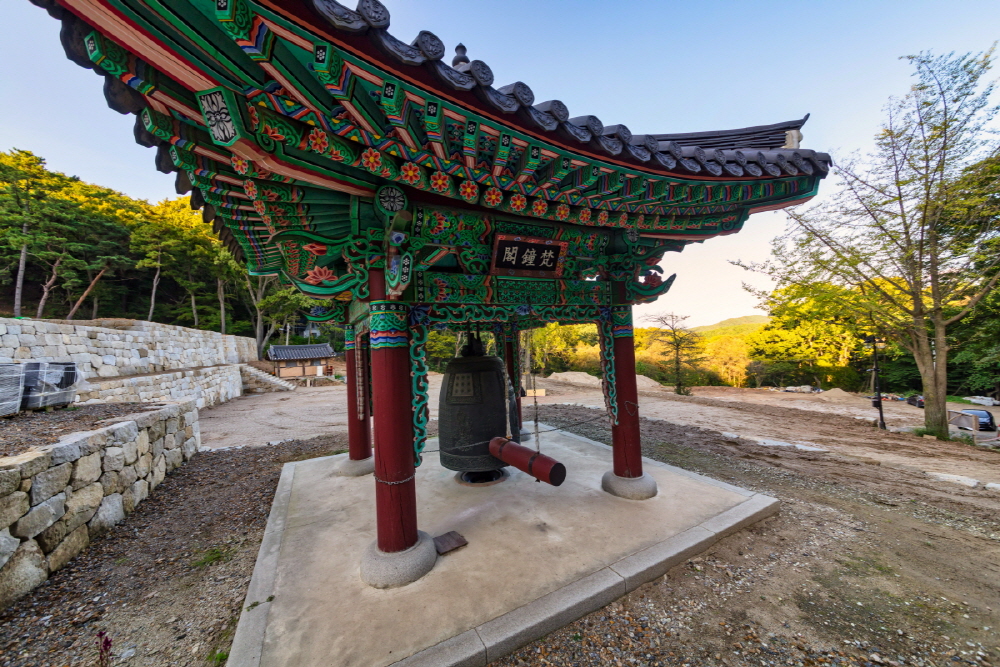 This temple was founded by the Buddhist monk Naong in 1376 (2nd year of King U’s reign of Goryeo). It is located at the very foot of Cheongnyangsan Mountain. The temple is known for its extravagant atmosphere, evident in its gold-plated Buddha and golden bell. The temple was originally lost in the Second Japanese Invasion of Korea (1597–1598). It was rebuilt in the mid-1960s by the monk Beomnyun, who also named the temple anew. It is home to nine items of cultural heritage, including the painting of Buddhist guardian deities (Incheon Cultural Heritage Material) and the painting of Amitabha Buddha (Incheon Cultural Heritage Material). It was designated as a Traditional Temple by the Ministry of Culture, Sports and Tourism in 2020. Traditional Temples refer to Buddhist temples that display a clear sign of their historic period or are of high value in understanding Korean Buddhism, culture, or architectural history. The temple also has a wonderful view of the West Sea and the Incheondaegyo Bridge, and the setting sun behind the massive golden Buddha is also a view that should not be missed. 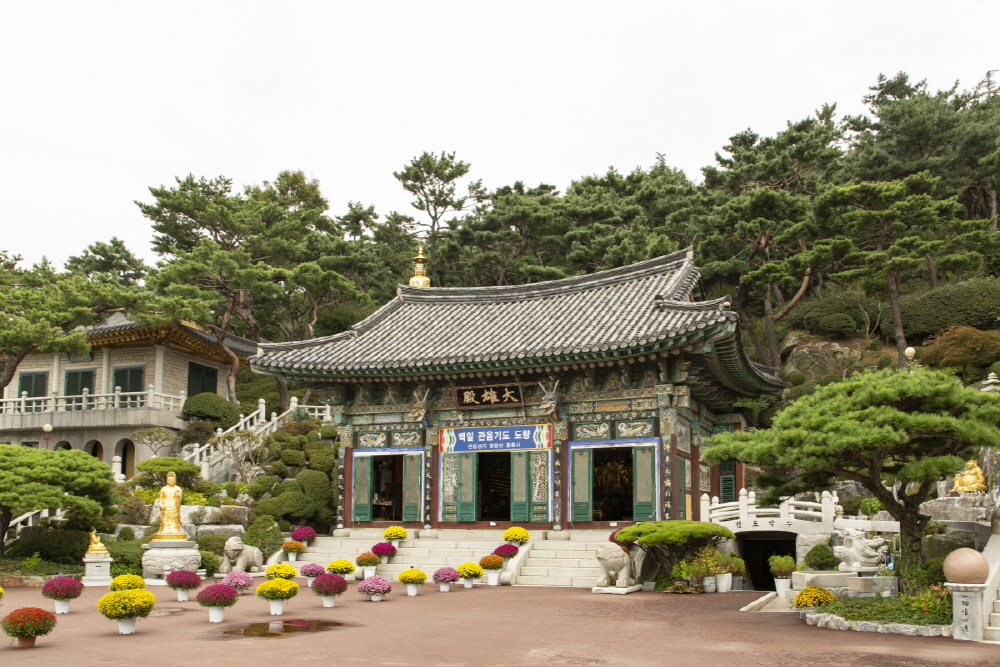 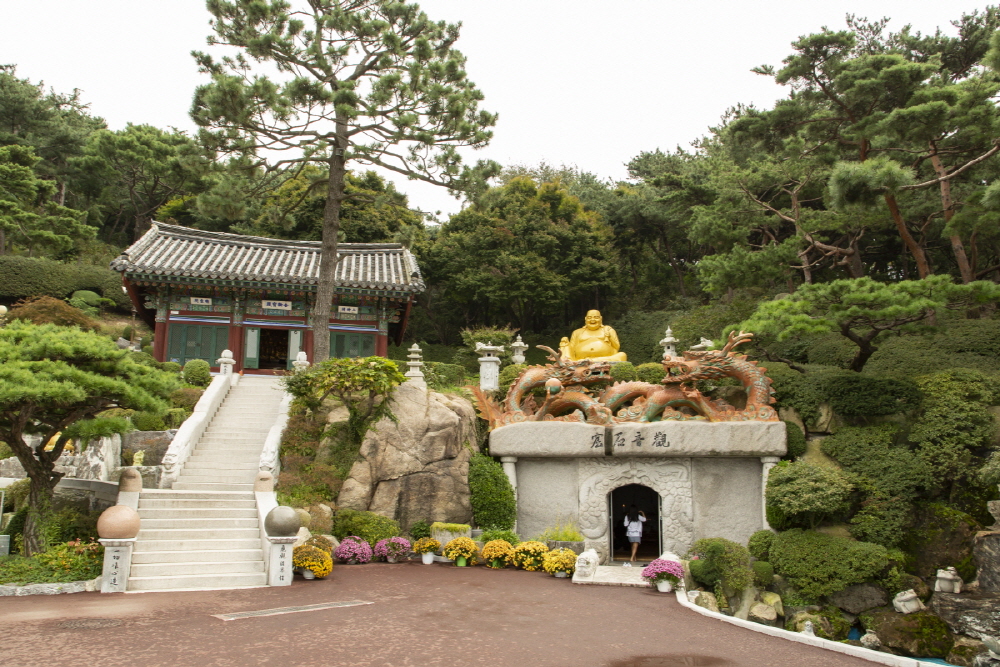 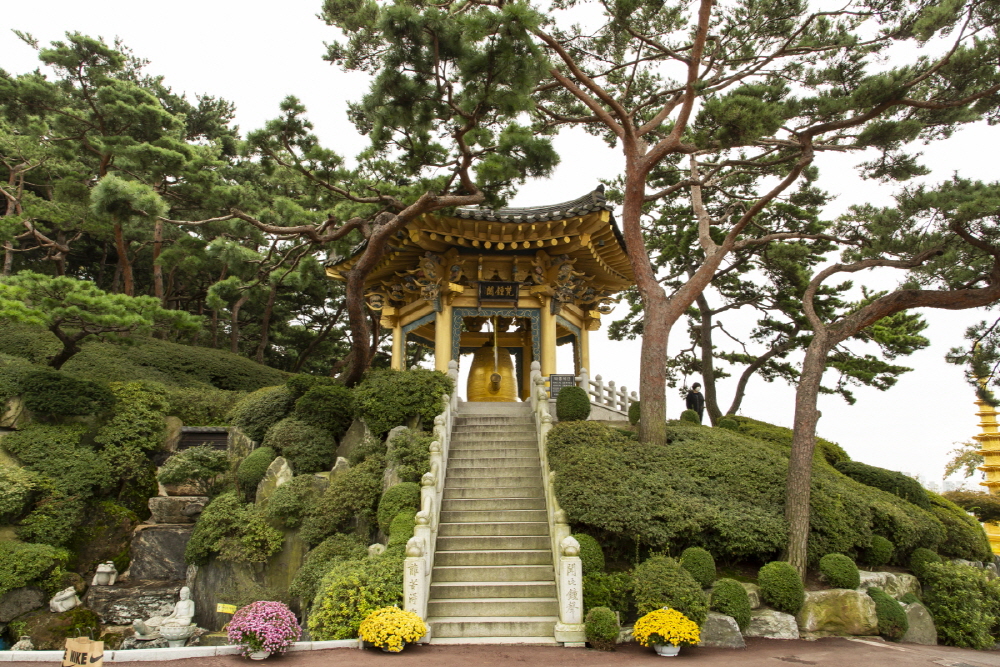 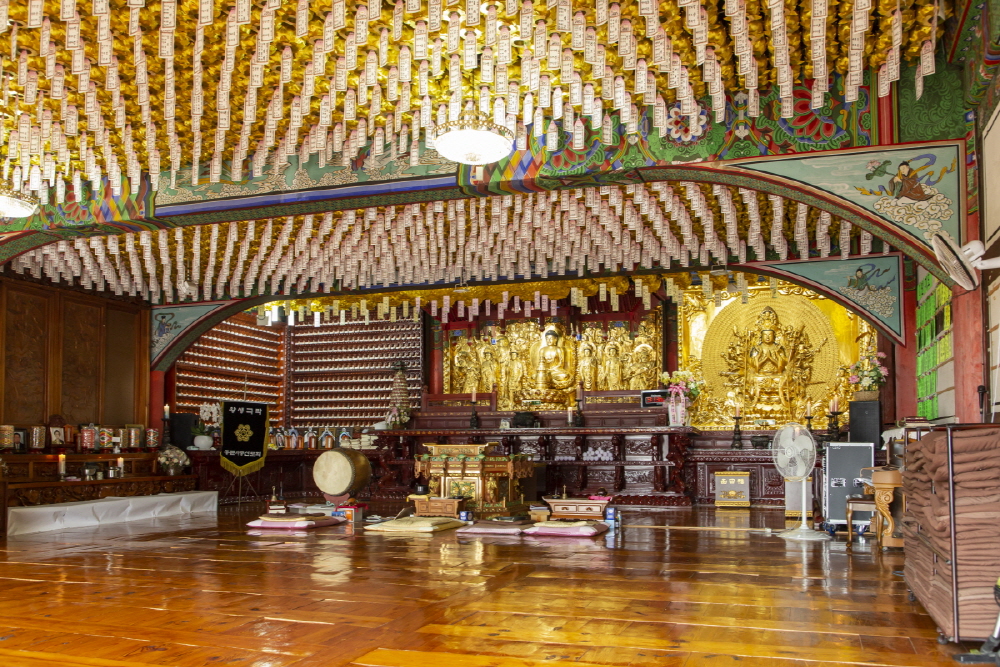 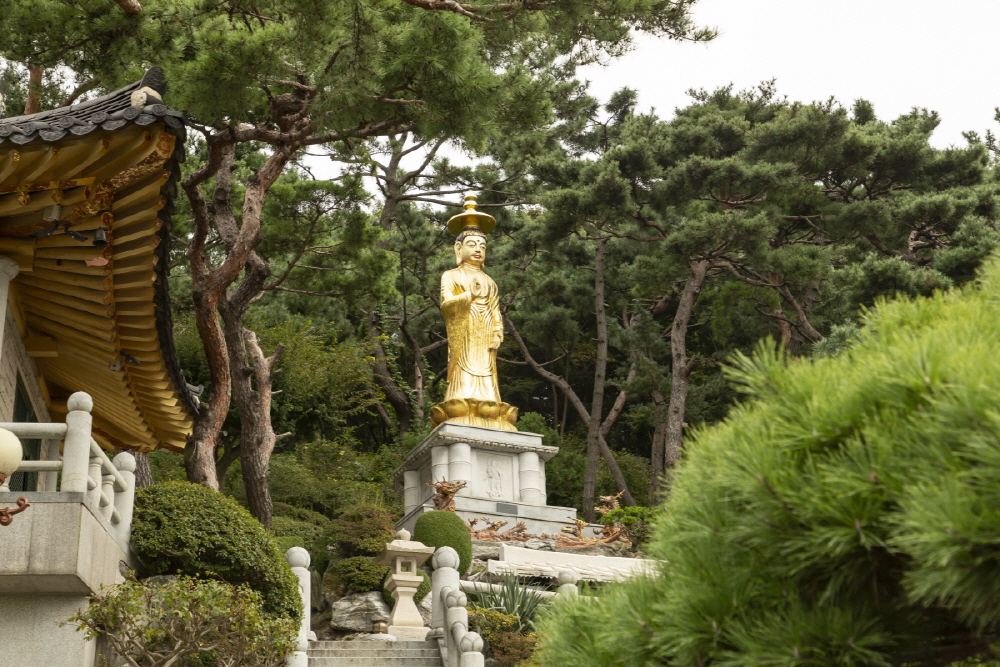