The Guardian of Hanyang at the Mouth of West Sea: Ganghwado Island

Ganghwado Island is located at the mouth of the Hangang River, which links Seoul with the West Sea. Because of its location, it was a site of great military and geographic importance. During the Joseon period, it often played the role of a vanguard in the defense of the dynasty, in conflicts such as Manchuria’s first invasion in 1627, the French attack in 1866, and the American attack in 1871. Traces of that history can be found in the ruins of defensive fortifications that were built on the island.

In 1871, the Asiatic Squadron of the United States Navy pushed up the Ganghwa Straits to force the isolationist Joseon to trade with the United States. The defenders fought back against the invaders by firing their cannons, but the difference in the military was proved to be too great. On April 23, Chojijin Fort fell to the invasion, and Deokjinjin Fort fell the following day. The American forces then attacked the Gwangseongbo Fortress, and the defenders there, led by Eo Jae-yeon, fought back with valor. The result, however, was horrific. Everyone in the fortress perished, save those who were rendered immobile by severe wounds. 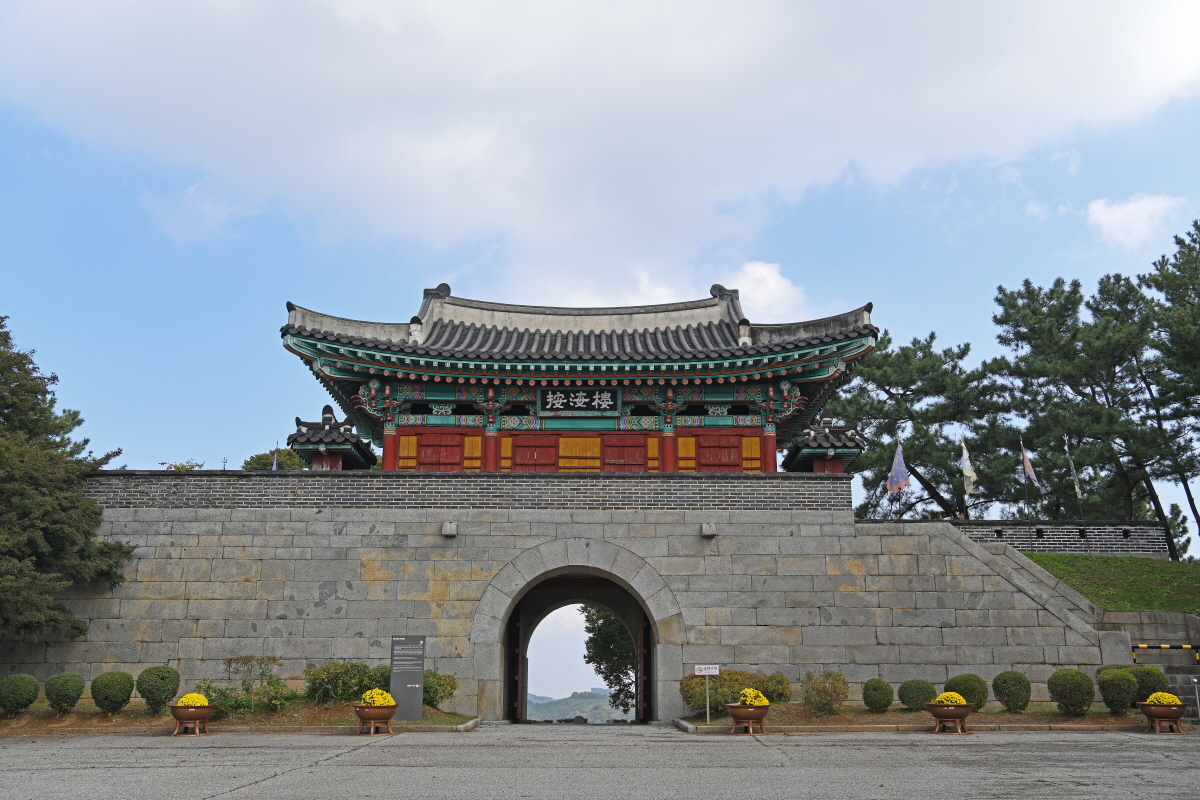 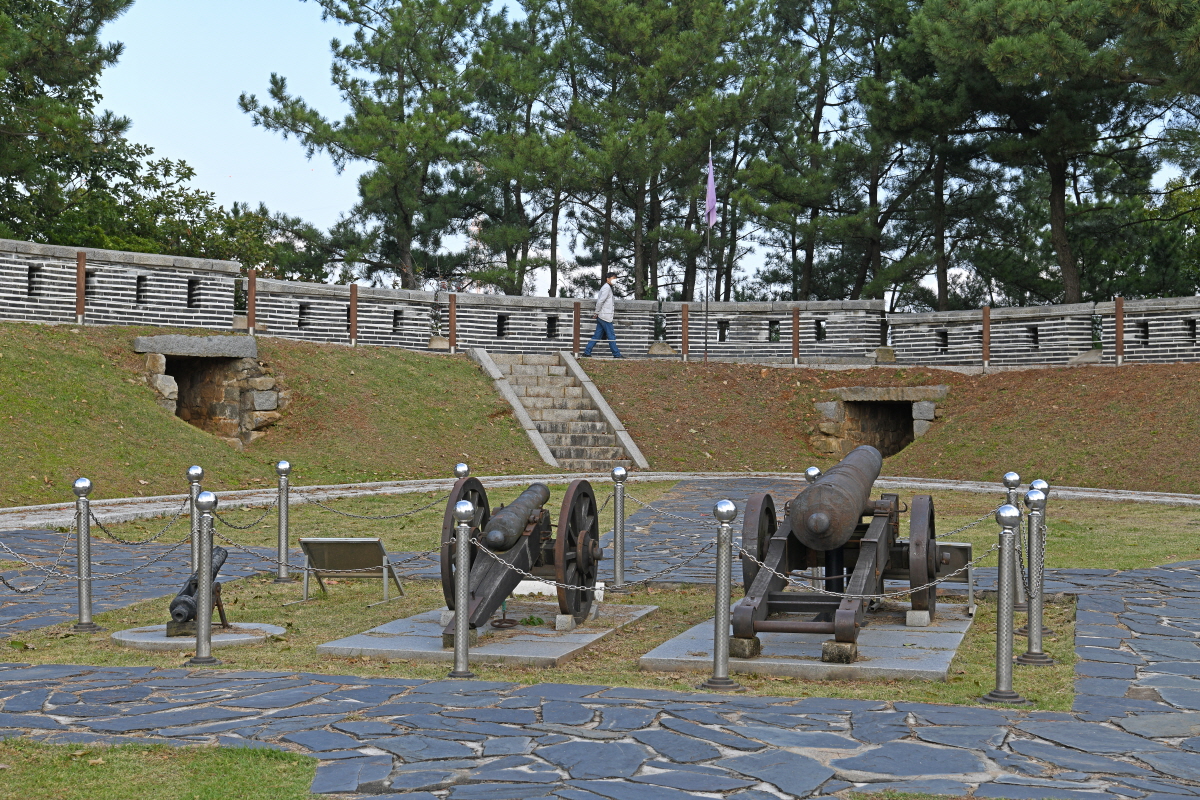 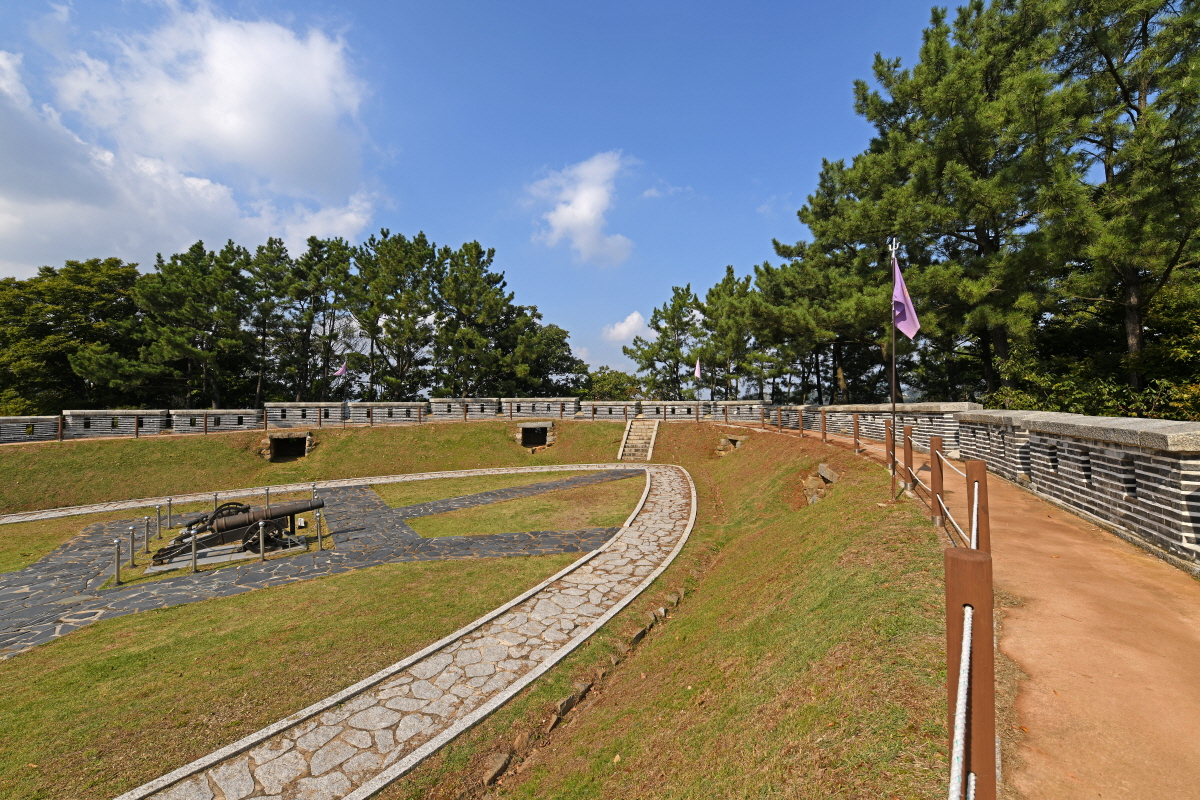 Gwangseongbo Fortress was an important part of the defensive fortifications at Ganghwa Straits, along with Deokjinjin Fort, Chojijin Fort, Yonghaejin Fort, and Munsusanseong Fortress. It is a treasure trove of Joseon-era fortifications and military structures. Today, Gwangseongbo Fortress is a historic park well-regarded for its view, with fortifications such as Gwangseong, Sondolmok, and Yongdu situated in the area nearby. Yongdud Fortification, in particular, lies at the end of the path through a lush pine grove, which connects the Anhaeru Pavilion at the entrance with the famous view. The nearby Sondolmok Strait flows in a series of dizzying whirlpools. 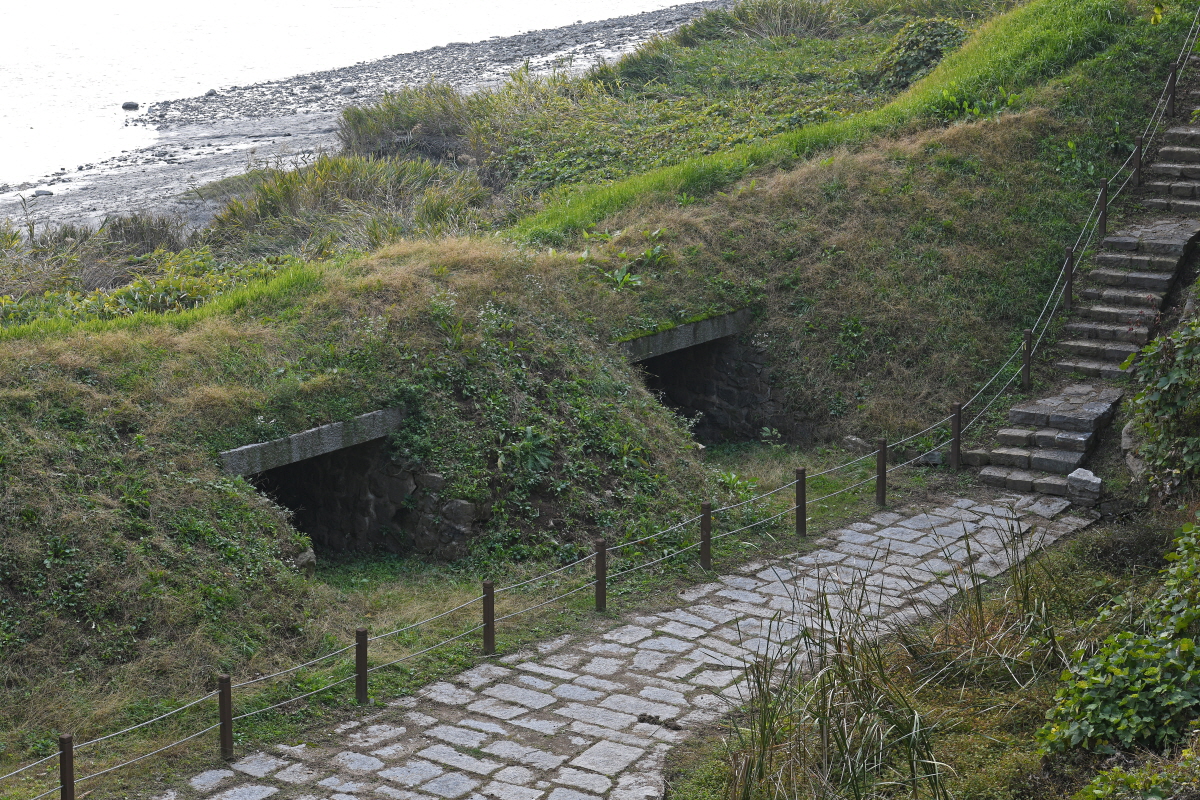 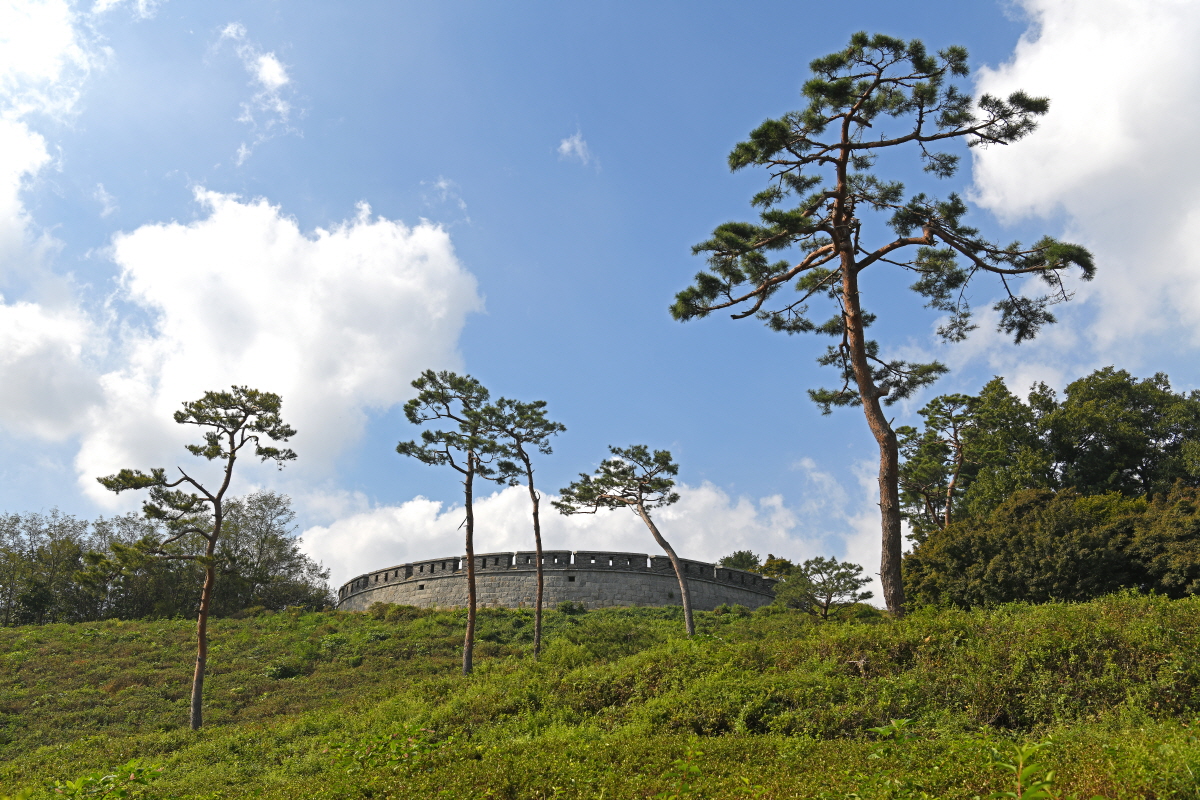 The American fleet during the 1871 attack bombarded the shores of Ganghwa Straits as a prelude to the invasion of 450 marines. The garrison at Chojijin Fort fought back valiantly, but could not overcome the superior firepower. The fort fell on April 23. Once taken over, all military facilities in the fort were destroyed. In September of 1875, the Japanese warship Unyo sailed from Busan to attack the Ganghwado Island. The defenders fought back, but the fort fell once again to the cannons on board. This incident formed the basis of Japan's gunboat diplomacy to Joseon, leading to the signing of the Treaty of Ganghwa. 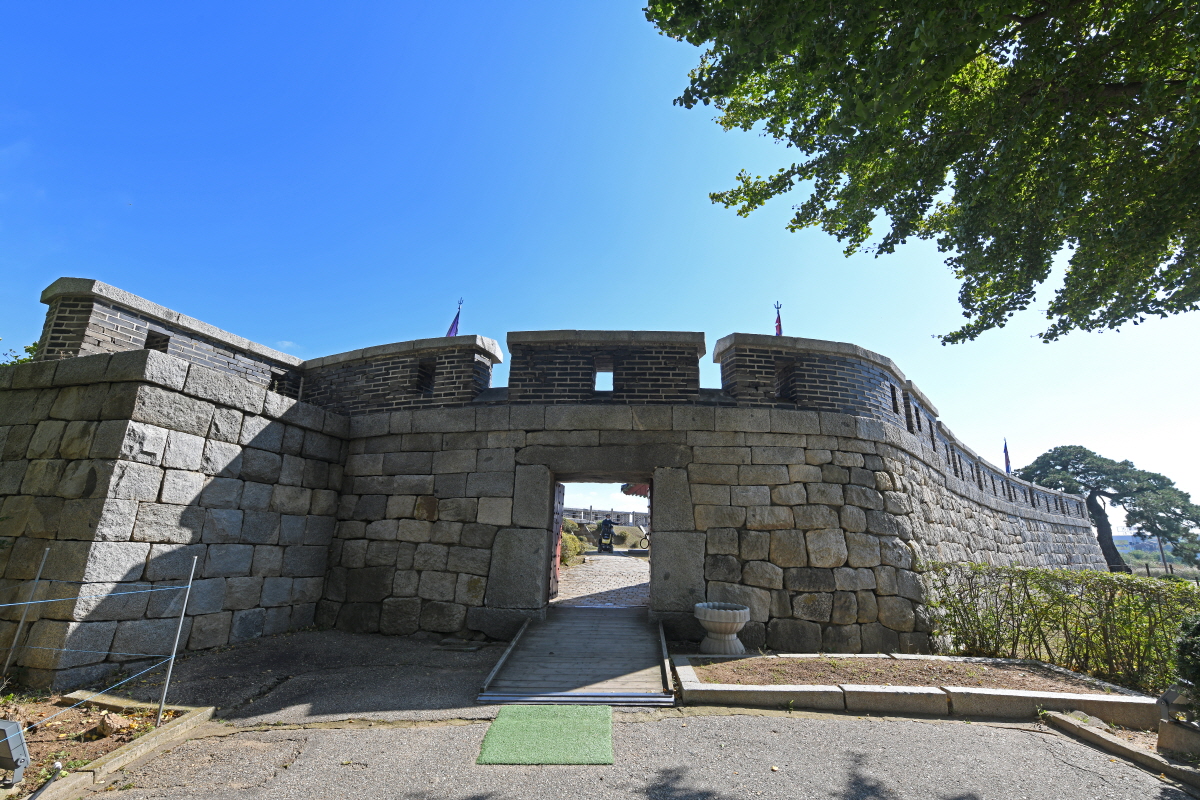 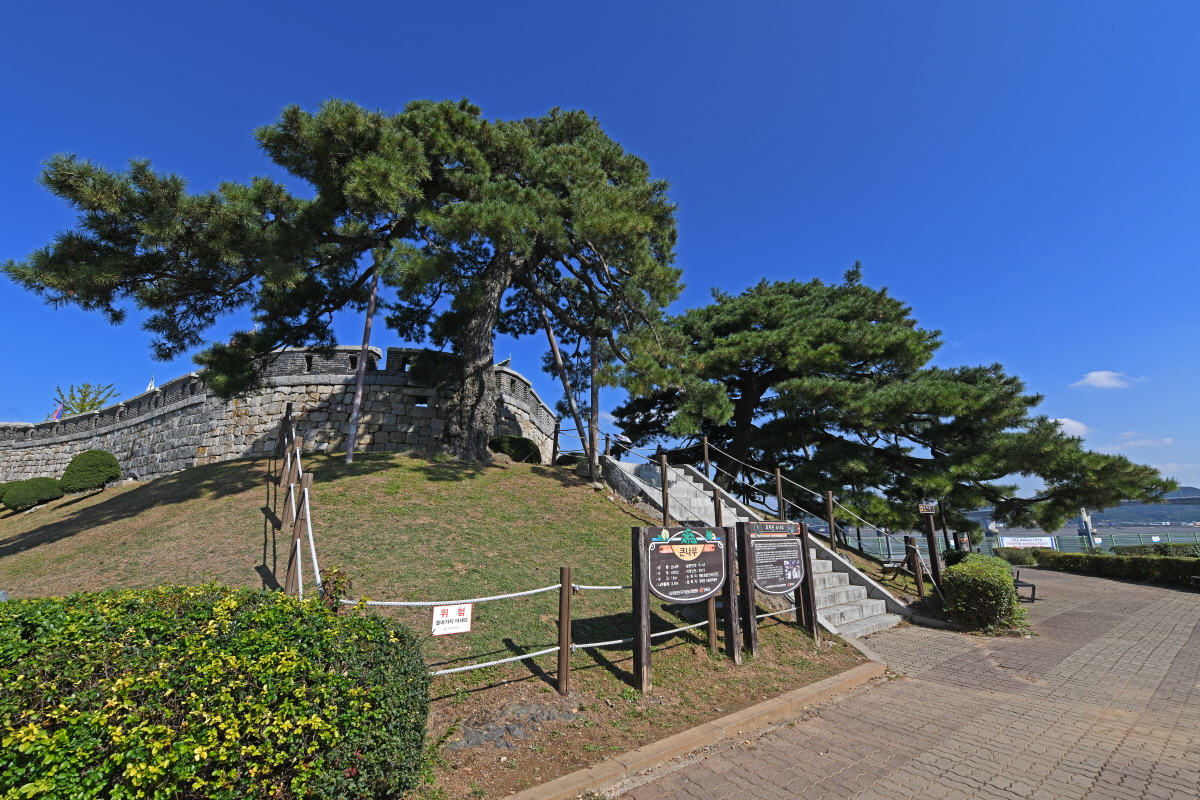 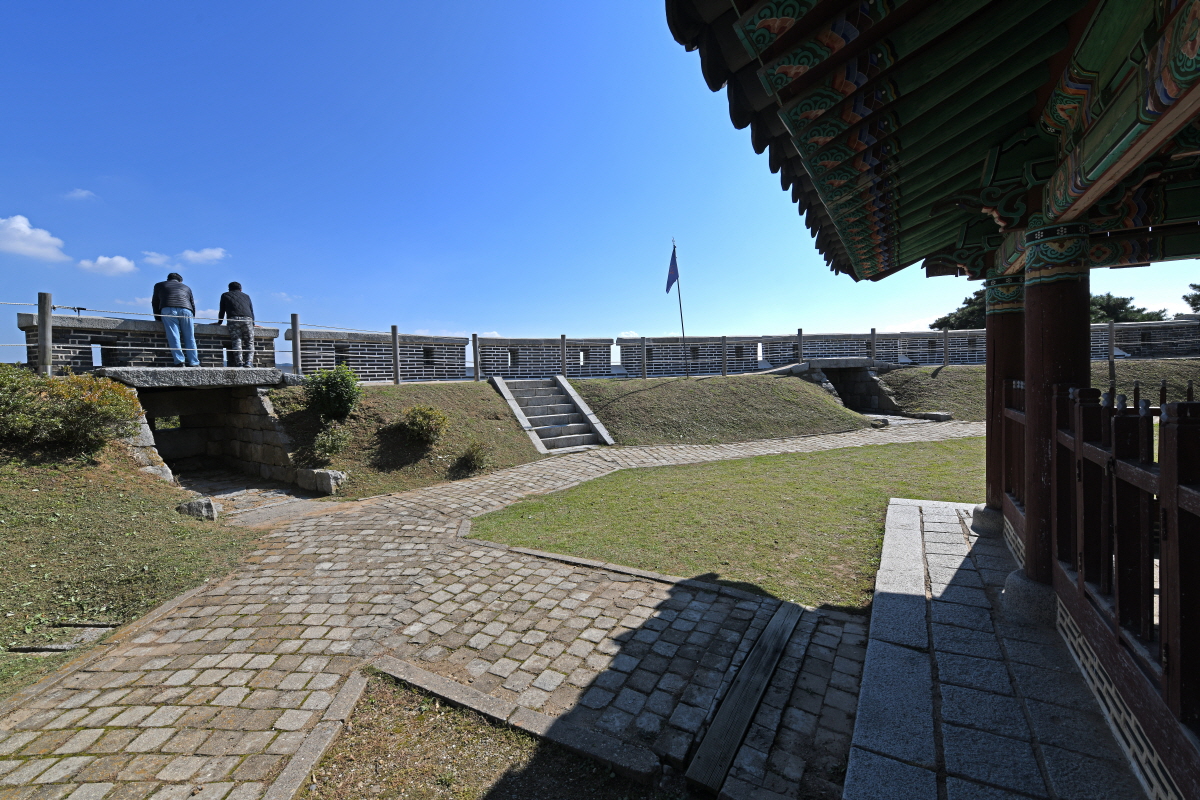 Chojijin Fort was leveled completely as a result of these invasions. It was home to three fortifications, Chojidon, Jangjapyeongdon, and Seomamdon. Today, only Chojidon stands, having been restored in 1973. This oval-shaped fortification is home to three cannon embrasures and nearly 100 embrasures for personal weapons. It is also home to a 400-year-old pine tree, which still bears wounds from the shrapnel during the battle. 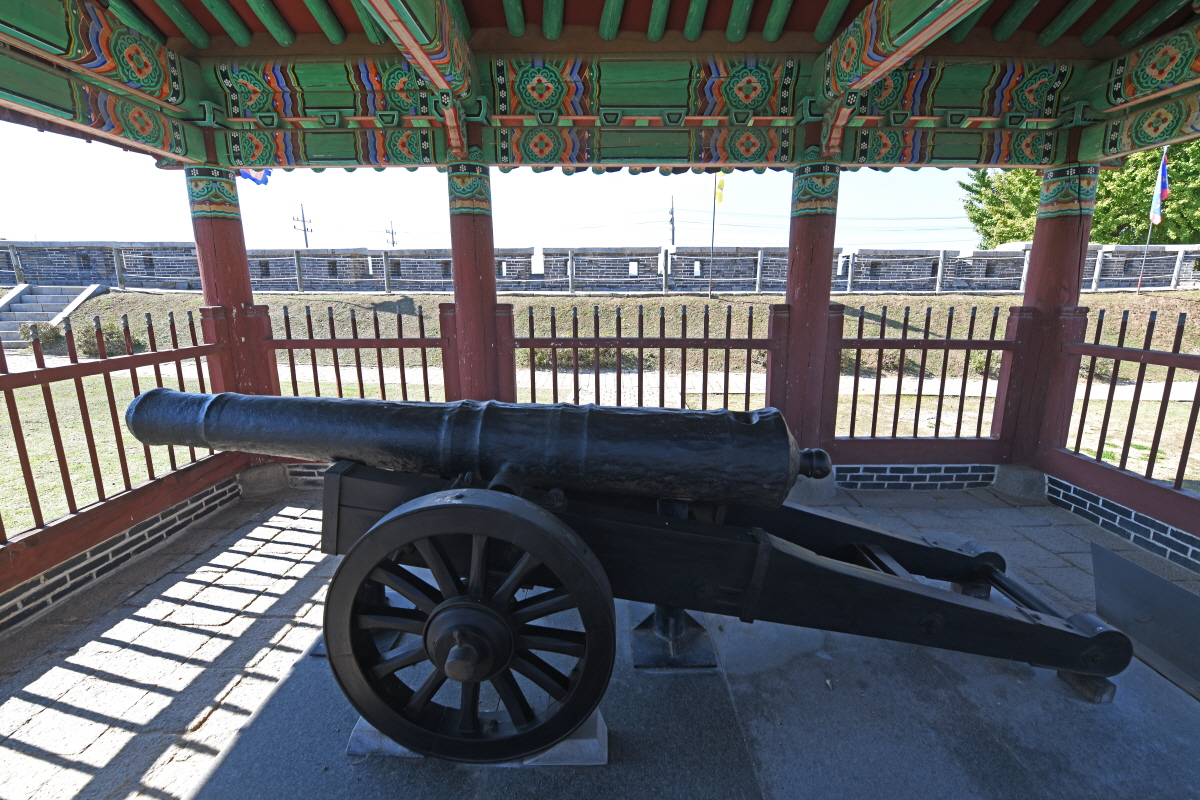 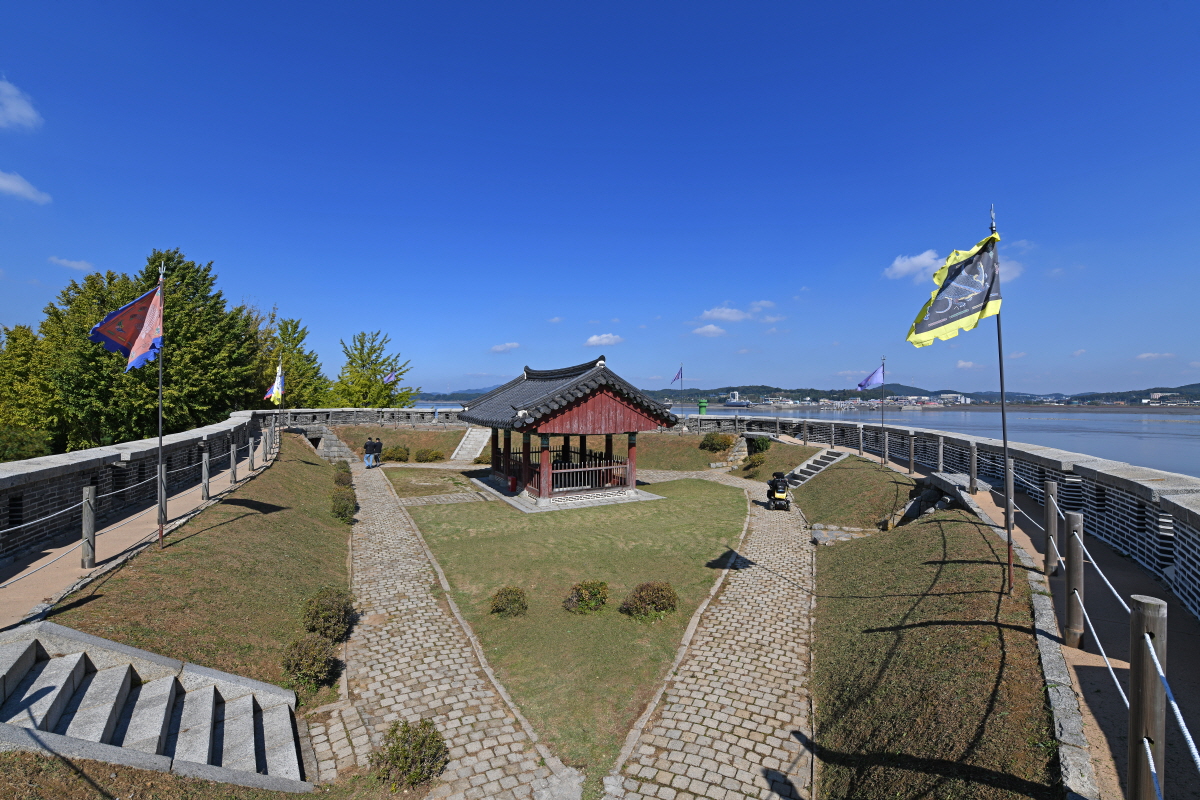 After the end of Manchuria’s second invasion in 1636, Joseon Dynasty erected 12 military forts to better defend the Ganghwado Island. That was also when Deokjinjin Fort was built. In 1679 (5th year of King Sukjong’s reign of Joseon), it was designated as the supervising fort over Yongdu and Deokjin fortifications, Deokjin and Namjang batteries, and was home to the strongest battery in Ganghwa Straits. Deokjinjin Fort came under attack during the French attack in 1866. Led by the French priest Ridel and three Catholic adherents from Joseon, the French forces landed on Ganghwado Island and easily took over the island. It was during this time that the French forces sacked the island, stealing regional specialties, gold, weapons, and thousands of books from the Outer Royal Library. General Yang Heon-su led the counter-attack on October 1, forming up at Jeongjoksanseong Fortress through the Deokjinjin Fort, and successfully fought off the French forces on October 3. The French withdrew after sacking the Ganghwaseong Fortress. 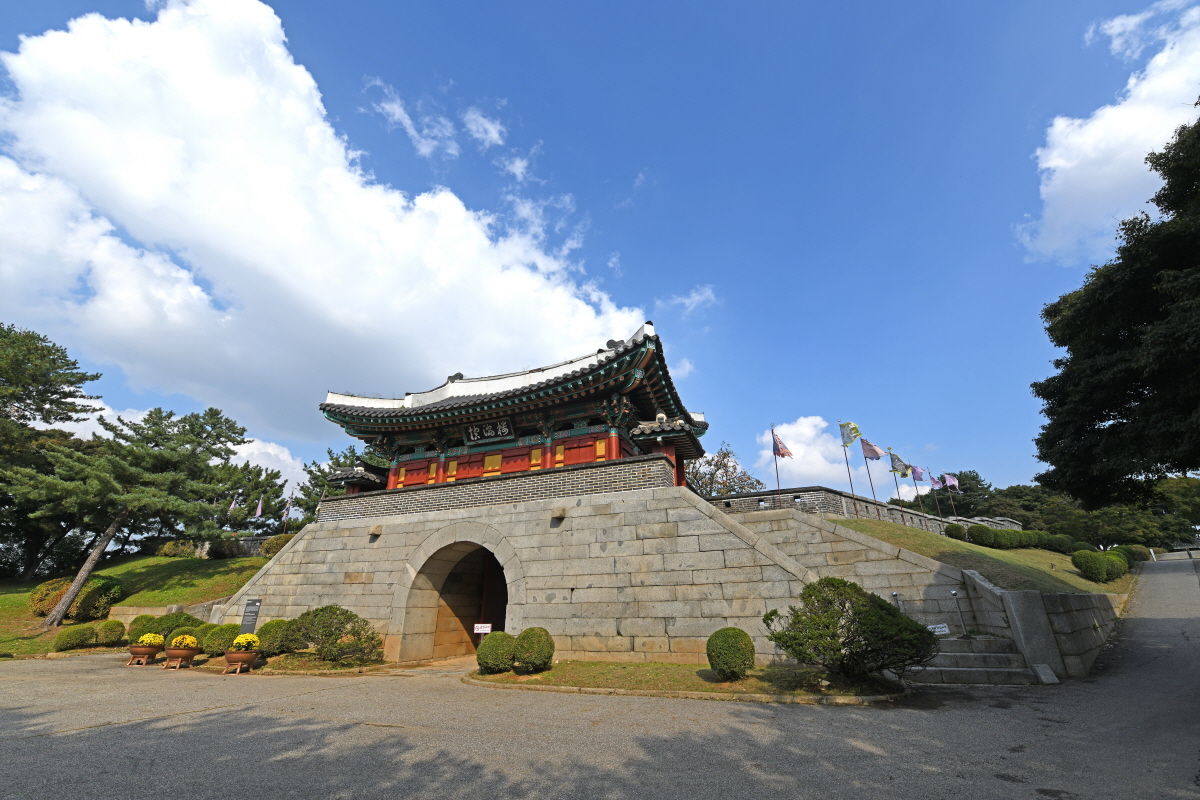 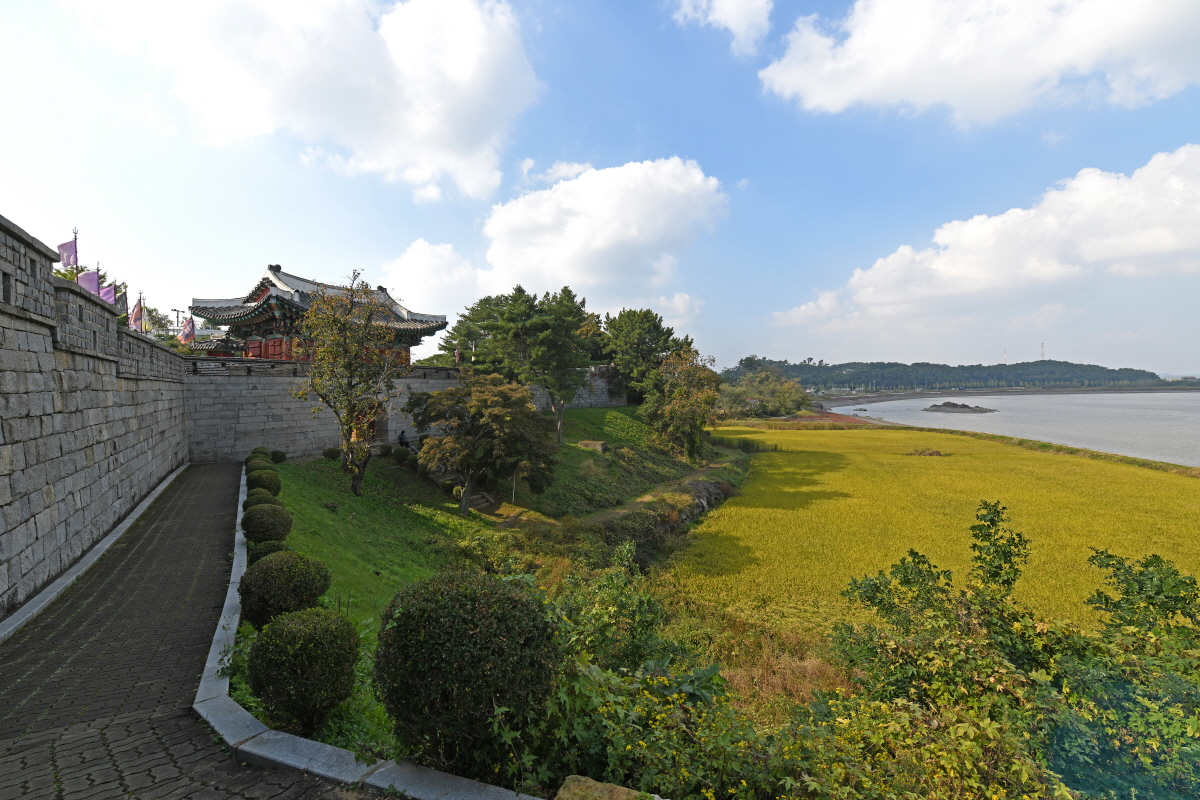 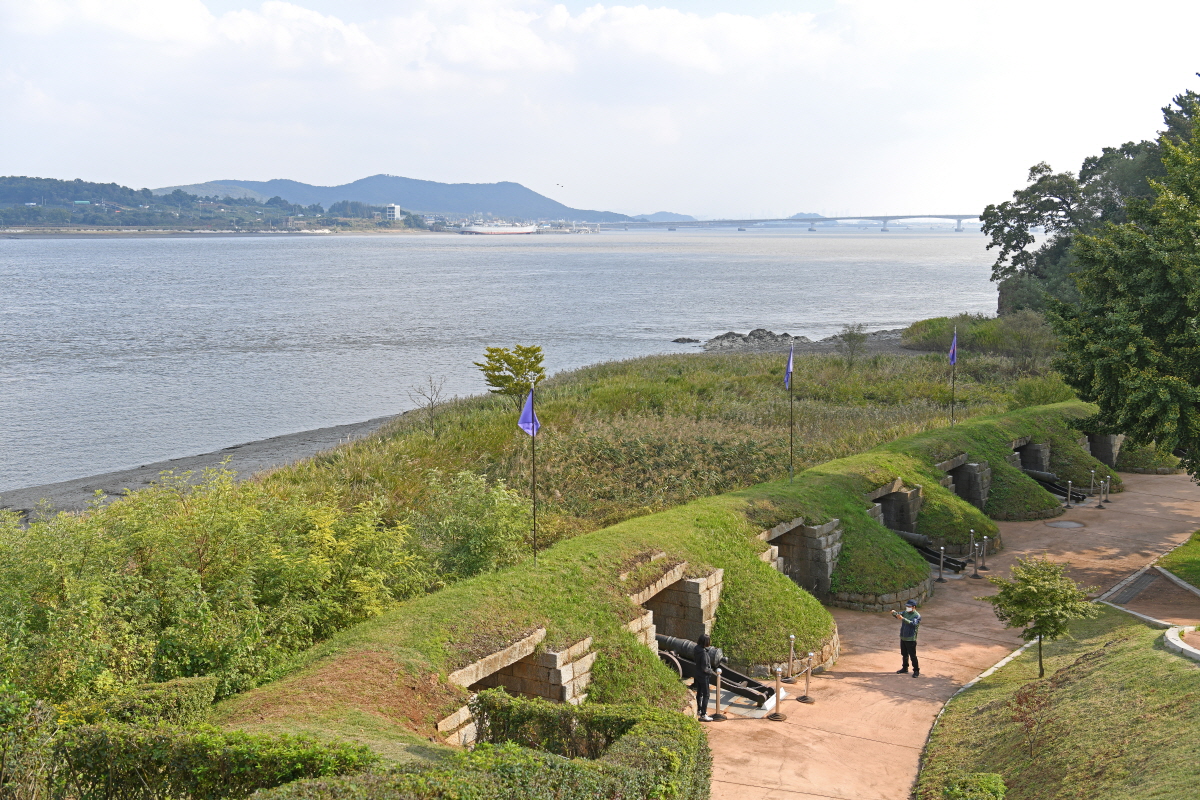 Deokjinjin Fort managed to fend off another invasion in the form of the American Asiatic Squadron in 1871 but was occupied by the American forces that had landed at the Chojijin Fort. The fortress walls were then completely destroyed. Those fortress walls, fortifications, and batteries lost during the American attack in 1871 were restored in 1976. 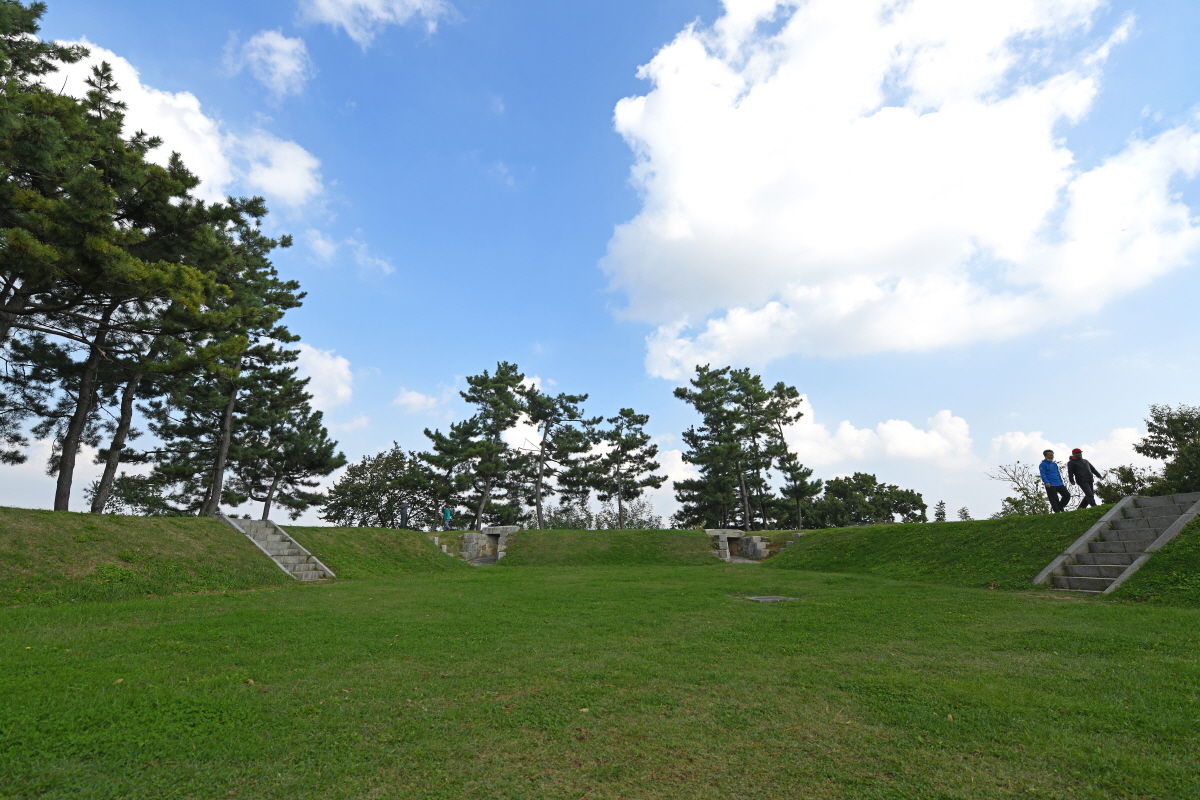 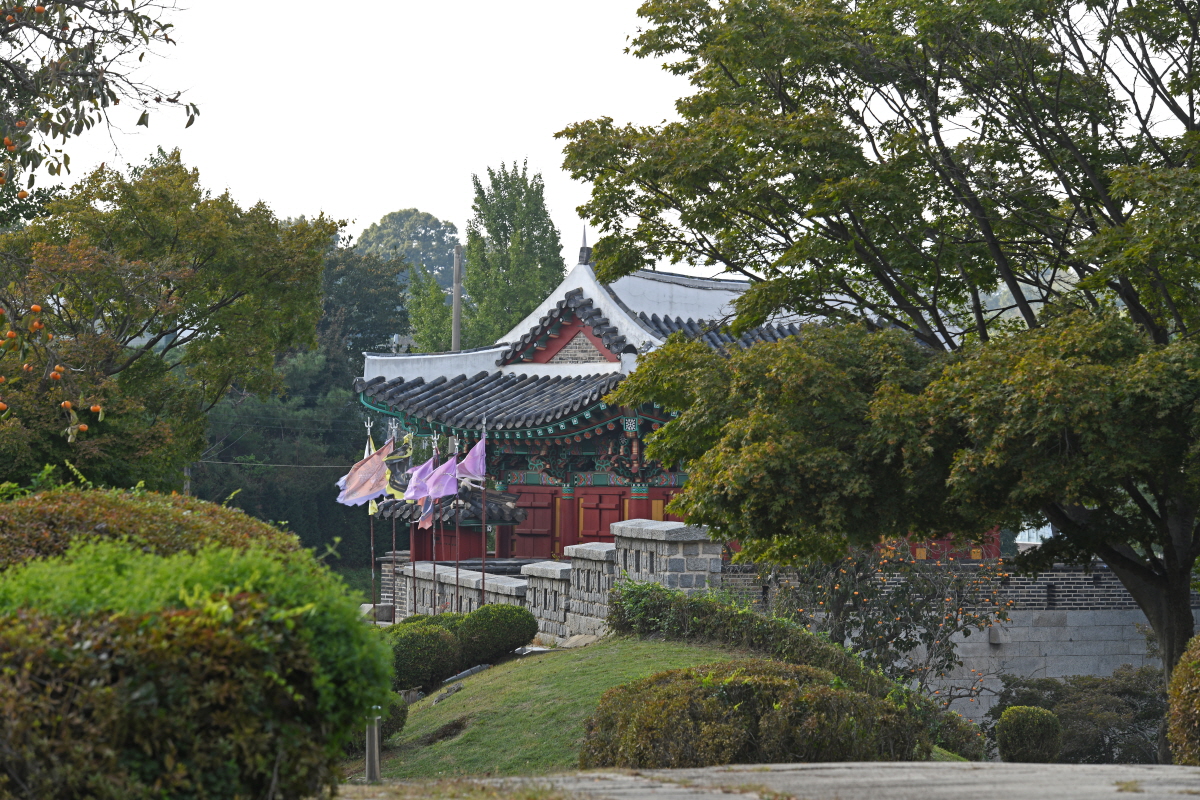 "Wolgoji, Jeokbukdo, Tongjin, and Pungdeok are the places where the boundaries between the two rivers are separated. It is a highly important site in the middle of the waterway and is a convenient place to anchor a boat, so if one is to array the forces from Wolgoji to Seomam and have the ships operate along the tides, that can, in fact, be done.”

This is a part of a report submitted by Yi Seon, special protector of Ganghwa, on May 21, the 7th year of King Sukjong’s reign of Joseon, according to the Joseon wangjo sillok (Annals of the Joseon Dynasty). The report argues that Wolgoji is a site of great importance as the confluence of Hangang River and Imjingang River, and thus should be defended as needed with military vessels. Wolgot Fortification is a defensive facility built on that site of importance. It is a fortification that makes up Wolgotjin, defending the northern sea from the Ganghwa Straits. Its role in peacetime was the inspection and surveillance of sea traffic so that threats to the river and the capital beyond could be screened. 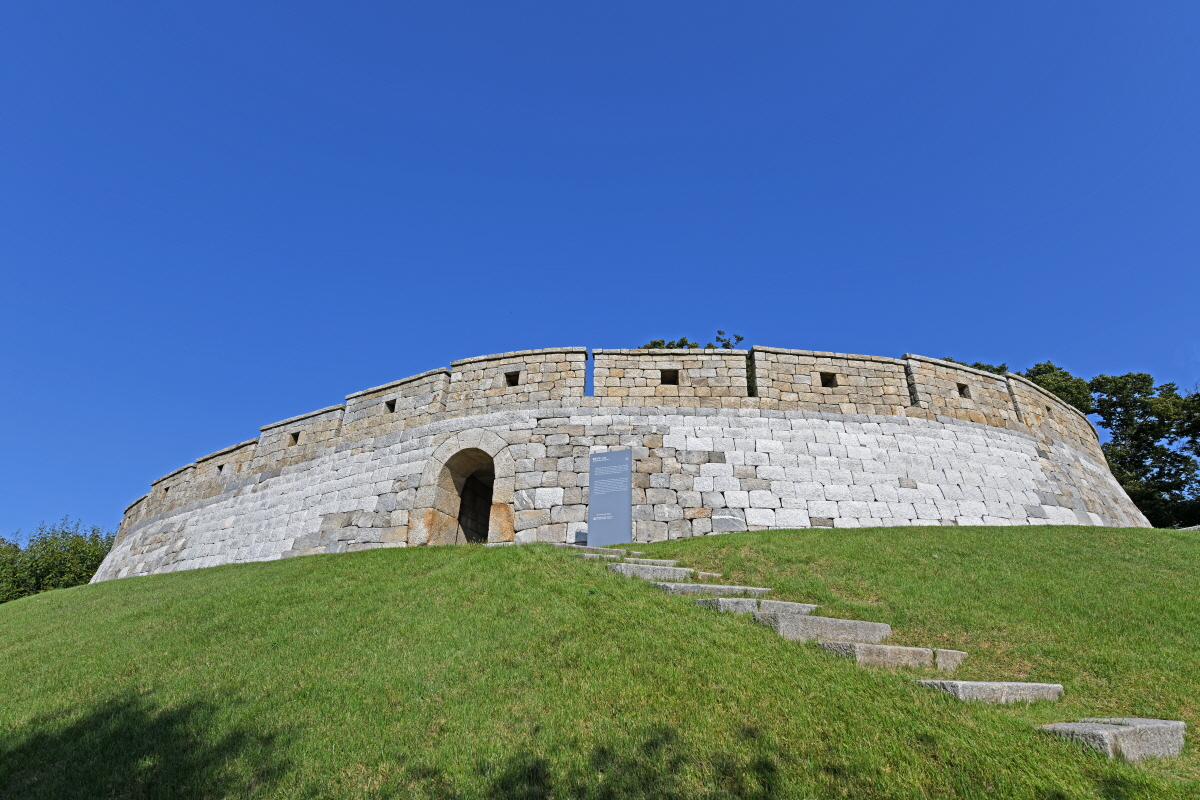 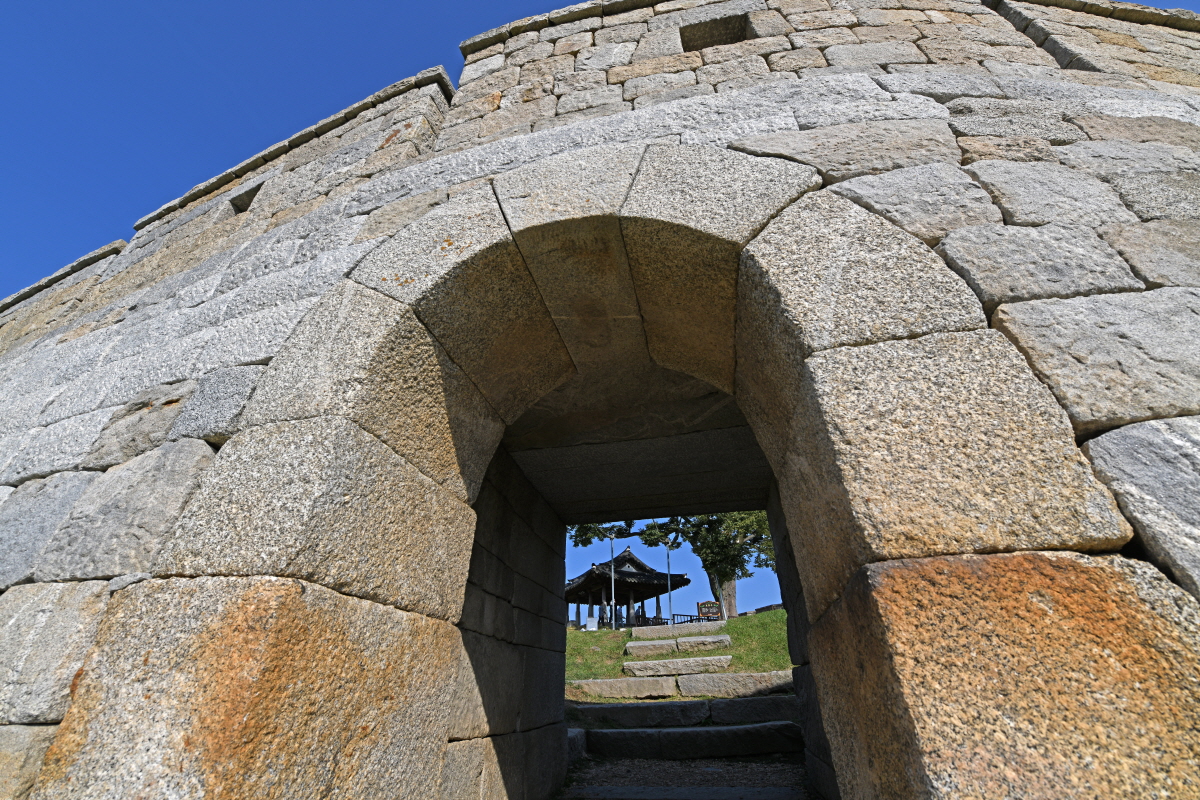 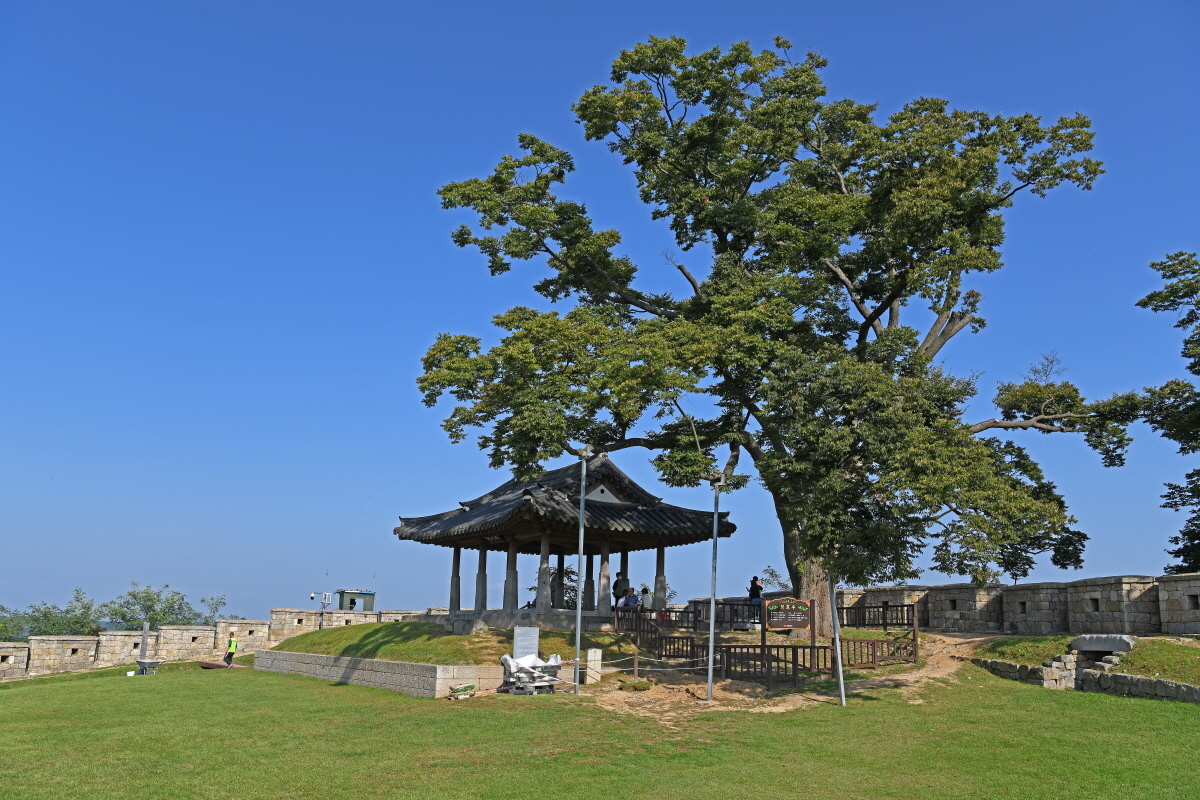 It is also the site of a pavilion called Yeonmijeong. The pavilion has an expansive view of the Gaepung-gun and Paju areas to the north and the city of Gimpo to the east. In the past, it is said that ships that traveled from the West Sea to Hanyang (currently Seoul) moored at the foot of the pavilion, waiting for the optimal tidal conditions that would allow them to ascend to the capital. It was also the site of the treaty signed with Manchuria in 1627 (5th year of King Injo’s reign of Joseon). 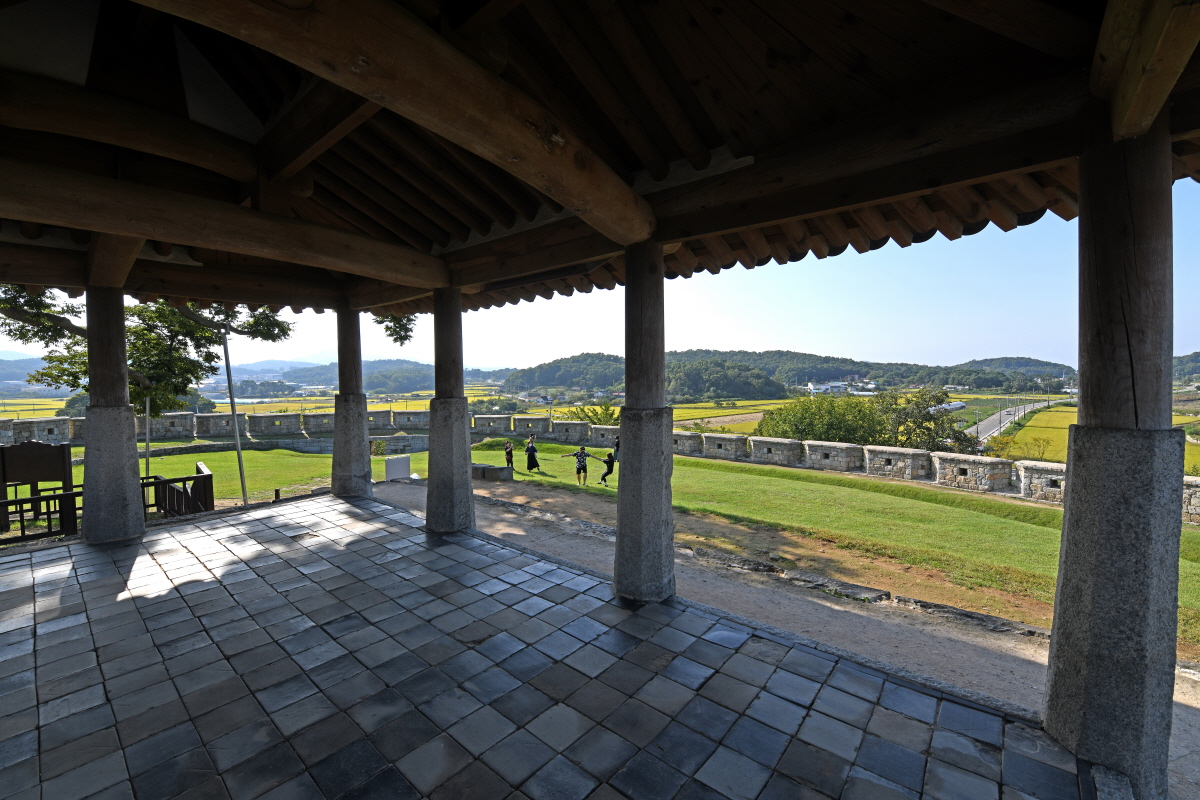 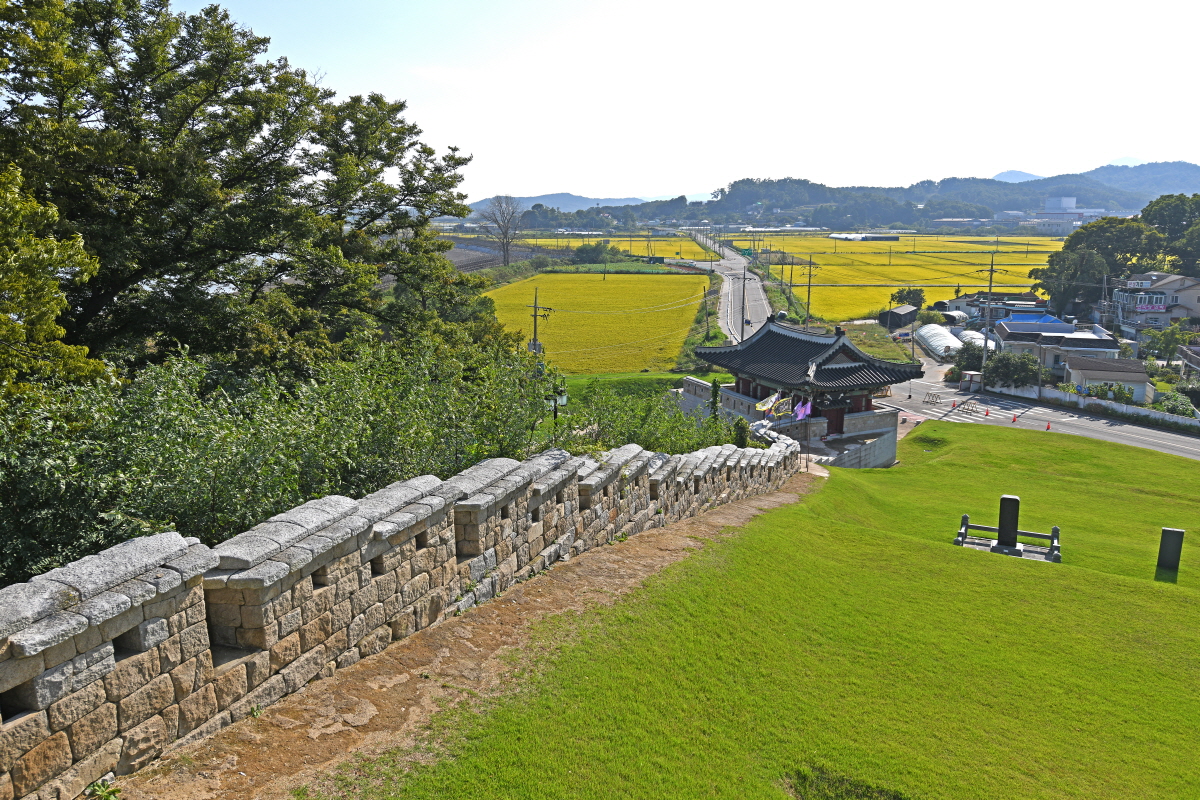