The Sinpo International Market is not a common traditional market. It is Incheon’s first daily market, established after the opening of the port, and falls in line with the trend of modern and contemporary history in Incheon. The market with history has shops with local characteristics and attracts us with a savory smell. I leave for the Sinpo International Market with KRW 10,000 on hand to see the market and enjoy its food.

Sinpo International Market is Incheon’s first modern daily market and a representative market of Incheon with a history of over 100 years. The market was formed after the opening of Incheon, and all kinds of foreign cultures came into the market through the Incheon Port. There was a saying that goes, “What is not in Sinpo-dong cannot be found anywhere.” Even today, not only Koreans but also foreigners continue to visit. There are old stores that are more than 50 years old, such as a shoe store run by Chinese and a mill that makes rice cakes from generation to generation, and recently, stores from young owners have opened up one by one, captivating the tastes of young people. 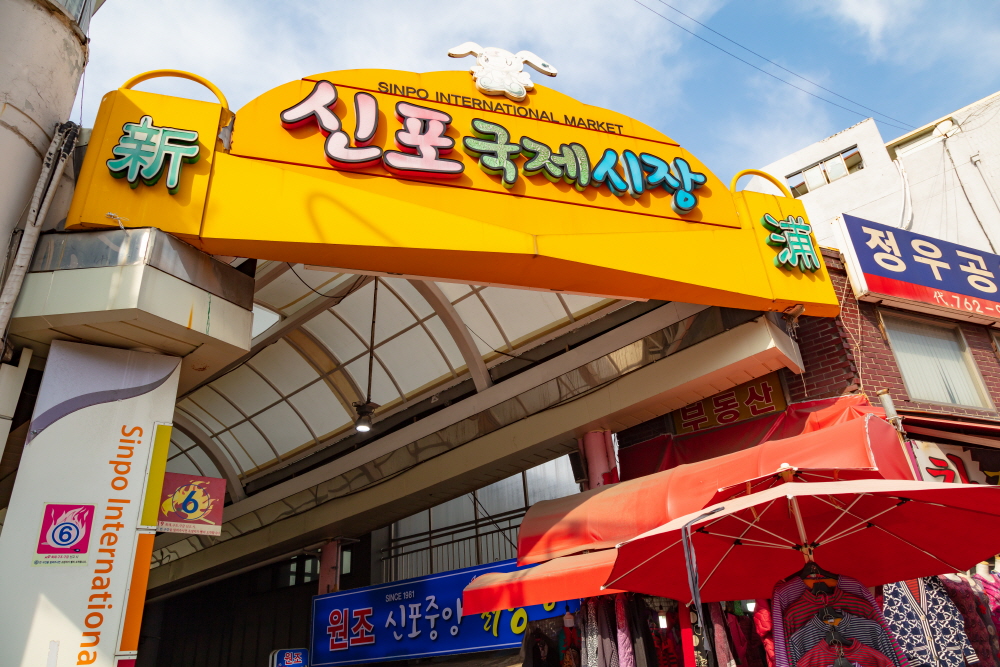 The market’s specialty is Sinpo deep-fried and braised chicken. The scene where people line up to buy the deep-fried and braised chicken is still the same as before. Deep-fried and braised chicken, mixed with special sauce in a large pot, has a soft meat quality and a sweet and spicy sauce, giving it a different taste from other stores. The original restaurant of Sinpo Mandoo, which has a nationwide chain of dumplings and spicy, chewy noodles, Shinpo Sundae, which opened in 1978, and the original restaurant of Cheongsil Hongsil, which sells buckwheat noodles and udon, are also quite famous. In addition, there are delicious snacks, such as Gonggal bread, tteokbokki, and fishcake bars, that can only be eaten while waiting in line. 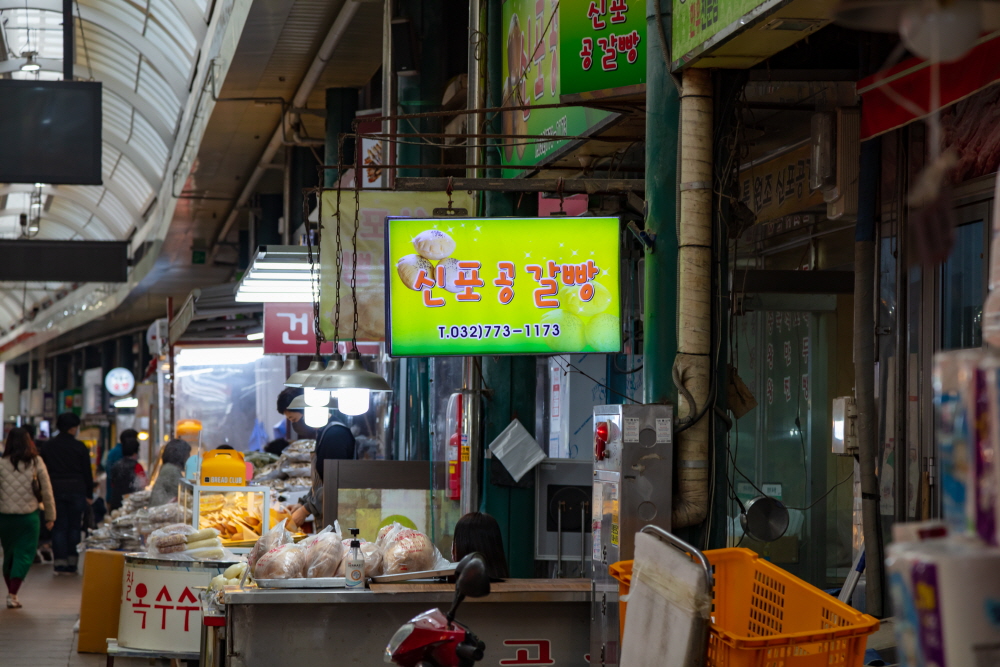 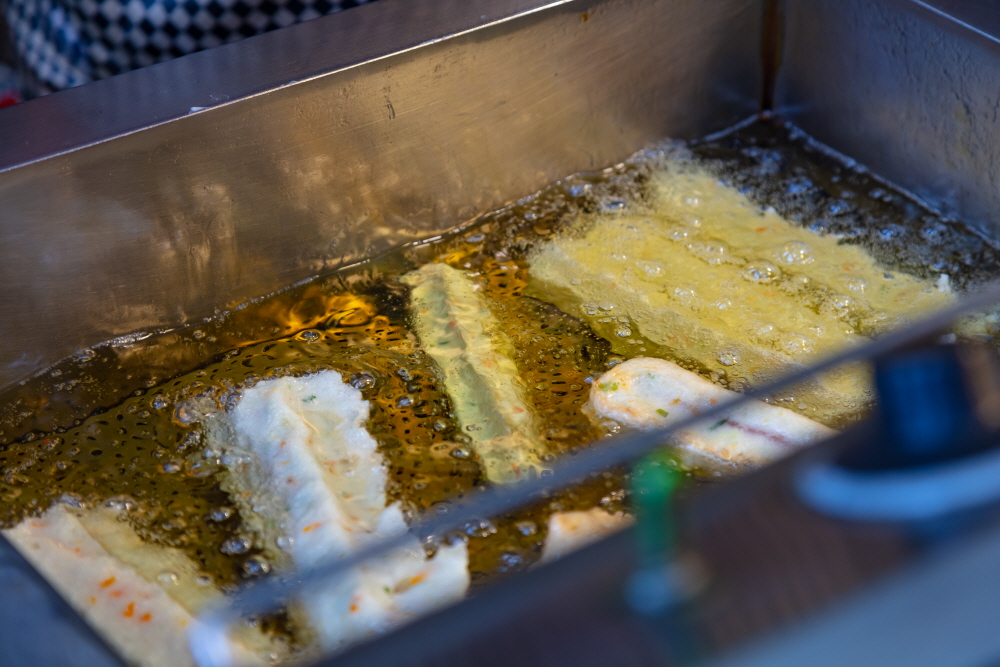 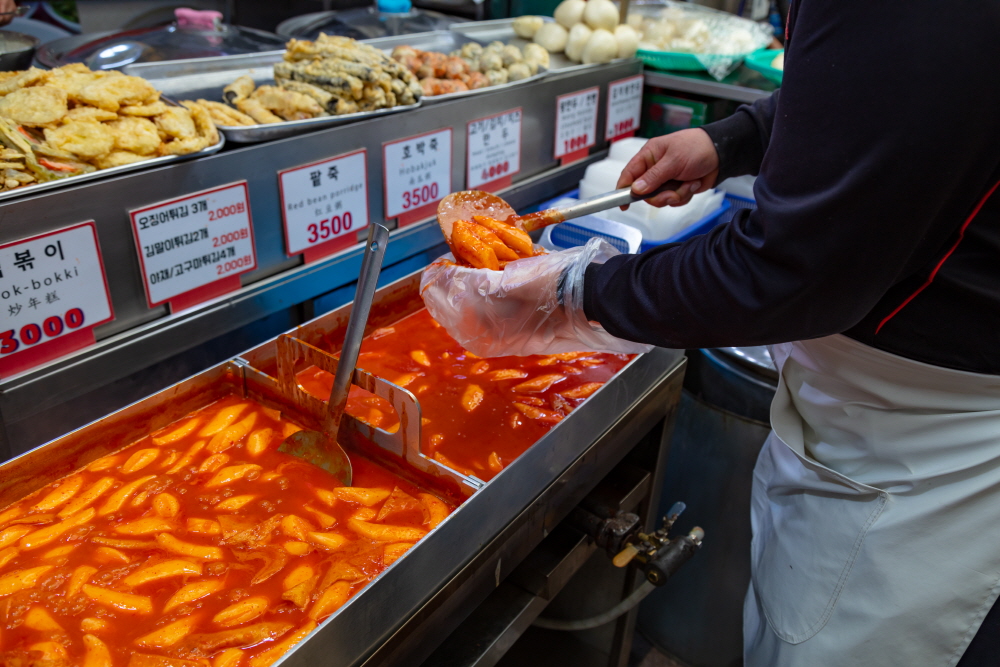 Sinpo International Market, the beginning of its history

Sinpo International Market began at the end of the 19th century with a vegetable market from the Chinese who had settled in Incheon. The Chinese, who had brought vegetable seeds from the Shandong Province in eastern China, farmed and sold them to the market in Dohwa-dong and Sungui-dong, Michuhol-gu. Soon, a fish market selling seafood caught off the coast of Incheon and a chicken street selling chickens and eggs were also formed. You can guess what it was like at that time from the sculpture of the vegetable market built at the end of the Noodle Soup Alley in the market. It is a sculpture of a Chinese merchant selling vegetables in the center, and a Korean woman and a Japanese woman are shopping on both sides. It is said that vegetables unfamiliar to Joseon at the time, such as cabbages, onions, tomatoes, and bell peppers, were easily available in this market. 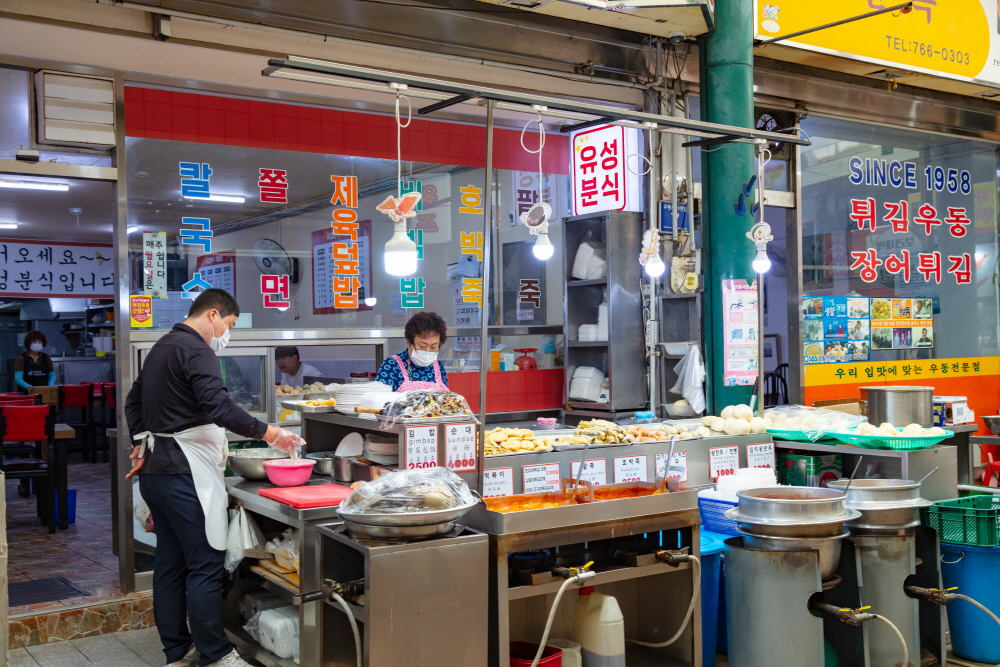 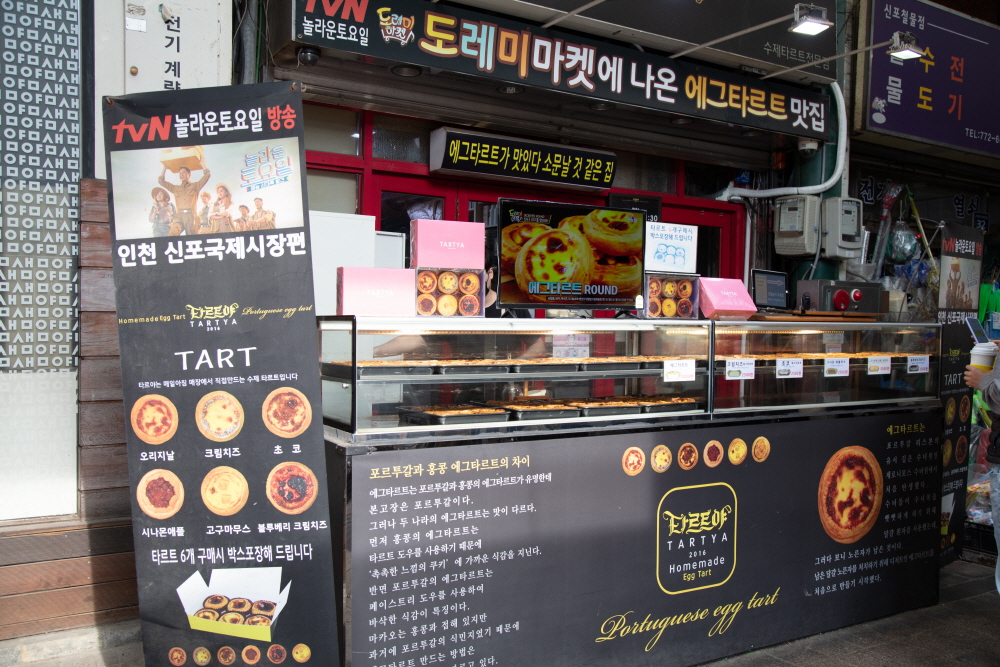 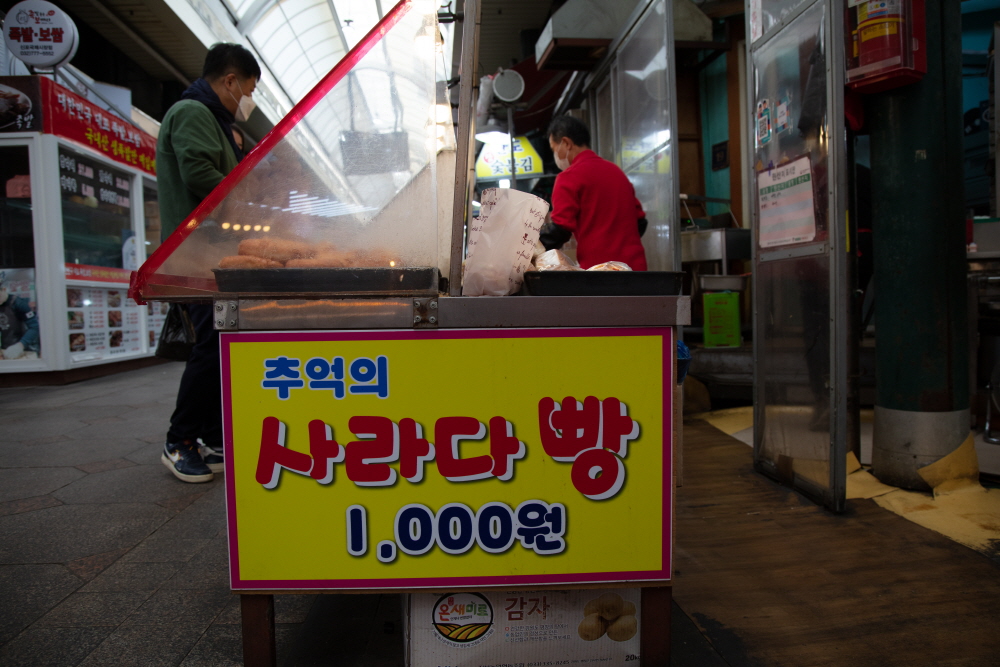 Sinpo Market was officially opened in November 1951. The market, which flourished day by day, faced a crisis of gradually decreasing customers because of changes in the times, such as the relocation of Incheon City Hall near the market to Namdong-gu in 1985. In 2002, a market modernization project was carried out, a ceiling arcade was installed, and convenience facilities were refurbished with the new look they possess today. In 2010, the market was renamed “Sinpo International Market” and established as a tourism market for both Koreans and foreigners.

Happiness with KRW 10,000, let’s dig into the Sinpo International Market.

If you only buy sweet and sour chicken and turn around, it is as if you have only seen half of the Sinpo International Market. In the market, there are a lot of dishes that are hard to miss, from Sinpo Gonggal Bread to Egg Tart. There is a way to taste all the market food with KRW 10,000. Buy tteokbokki (KRW 4,000), Sinpo Gonggal bread (KRW 2,000), an egg tart (KRW 2,000), a hot bar (KRW 1,000), and salad bread (KRW 1,000) one by one. Happiness worth KRW 10,000 is completed when you fill your stomach with tteokbokki, soothe the spice in your mouth with sweetness with the egg tarts and salad bread, taste the salty fish cake bar, and enjoy the crispy texture of Sinpo Gonggal bread. 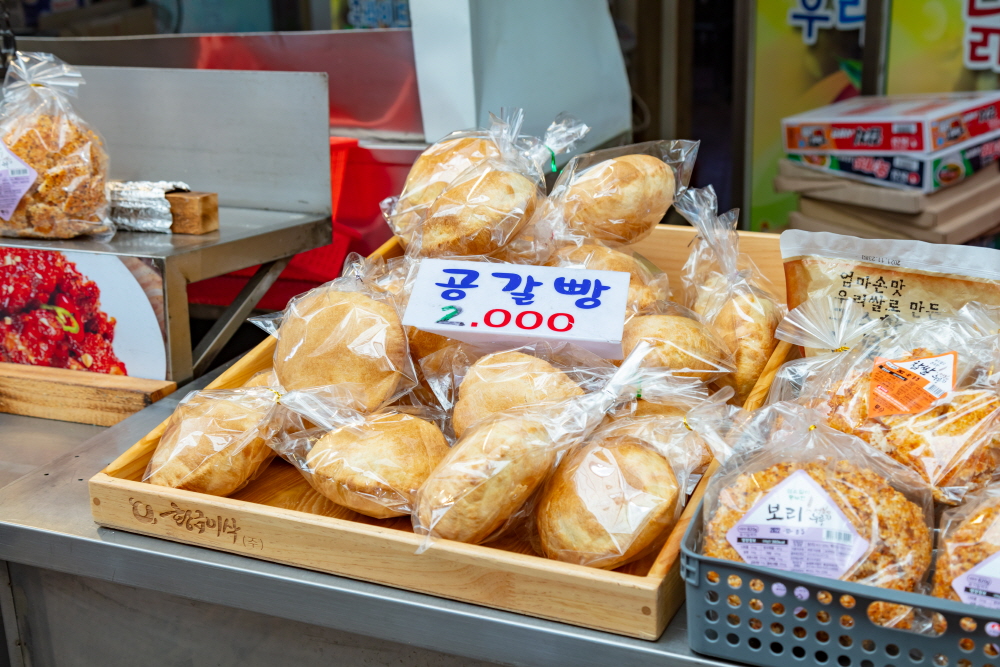 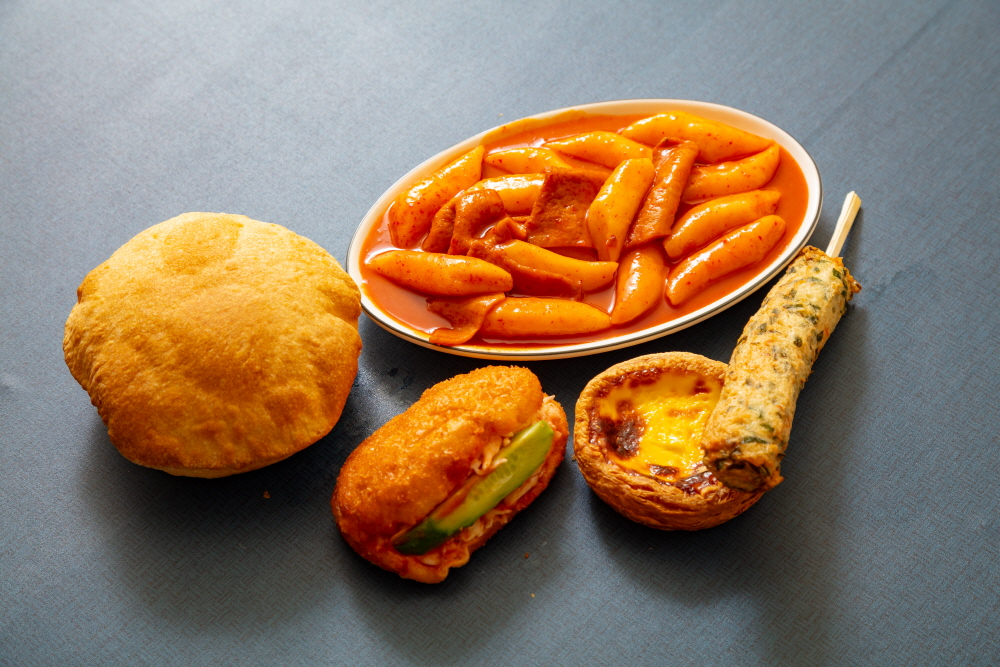 Tteokbokki is a familiar taste that you tasted in the market where you held your mother’s hand and followed when you were young. The texture of the rice cake stick with stewed sauce is chewy. The egg tart, which will soothe your spicy mouth, is a sweet dessert in which egg custard cream melts in a crispy pastry. Hot bars and salad bread are snacks that will make you sad if you miss out on the market tour. If you take a bite of a fish cake bar, it will warm you up inside, and even just one salad bread with generous ingredients is enough to make you feel full. Sinpo Gonggal Bread, which is puffed in a round shape like a full moon, is fun to eat because of its crushing texture, to the extent that it makes a “crunch” sound 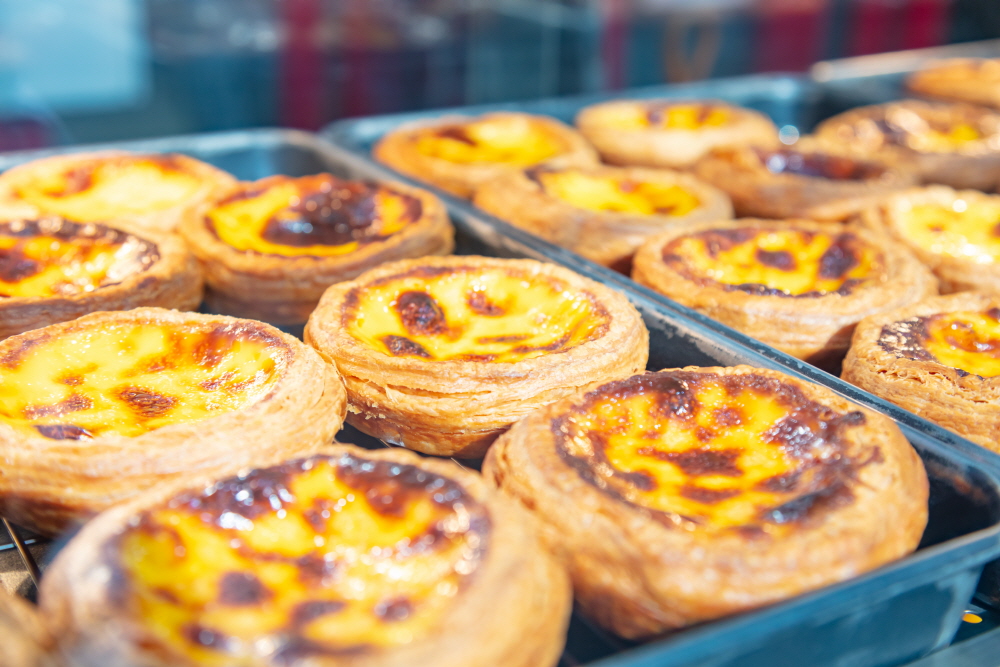 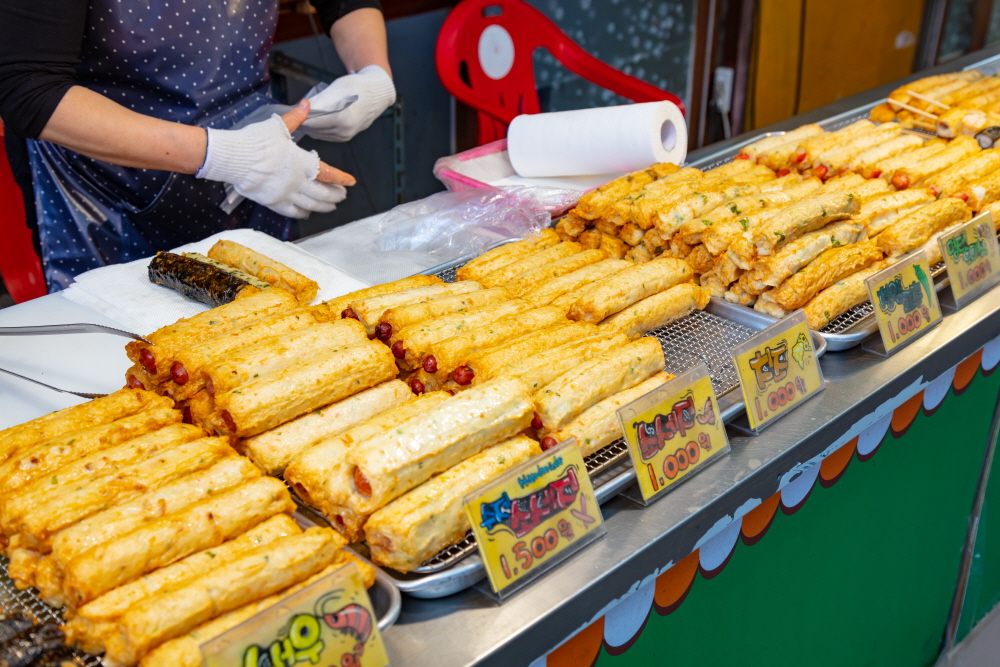