Incheon Healing Trip - Half or One Day - 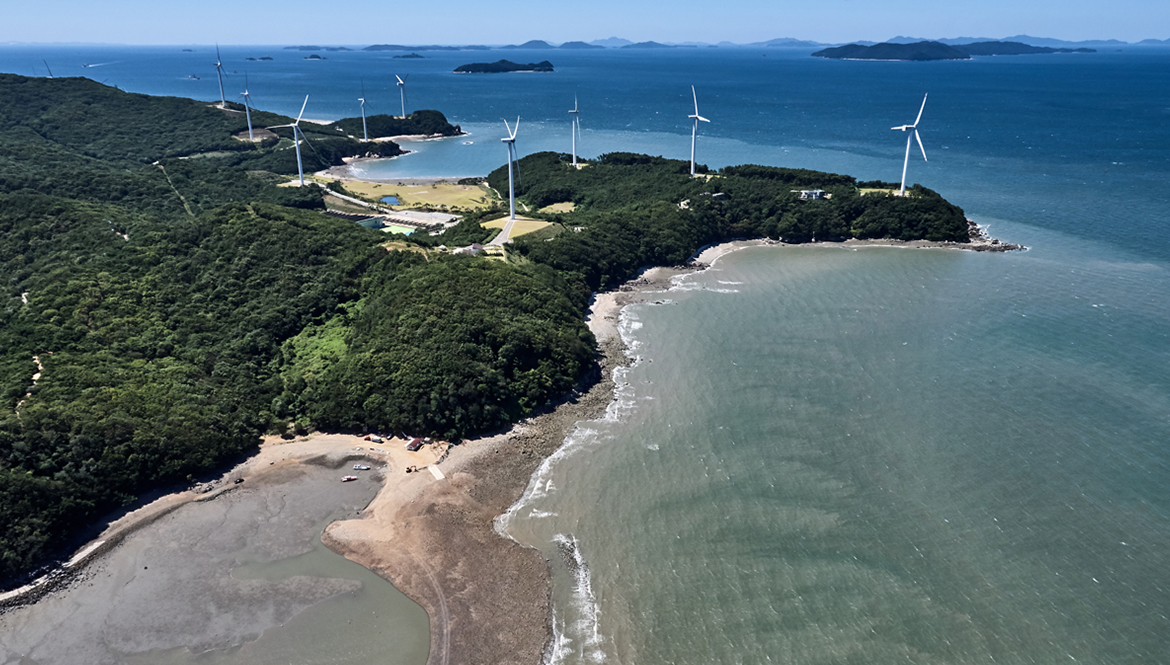 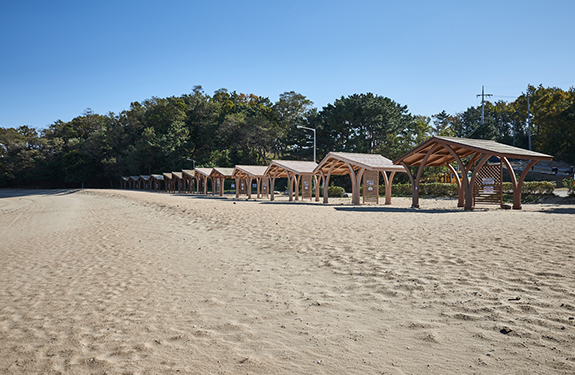 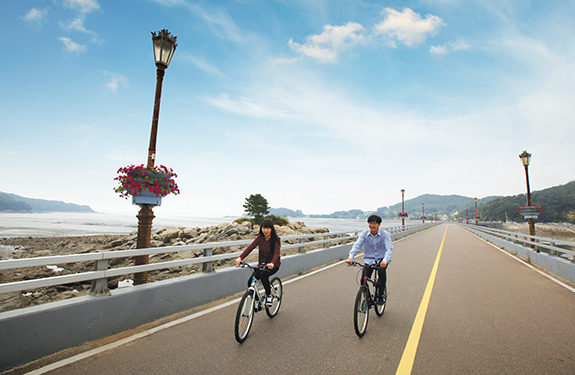 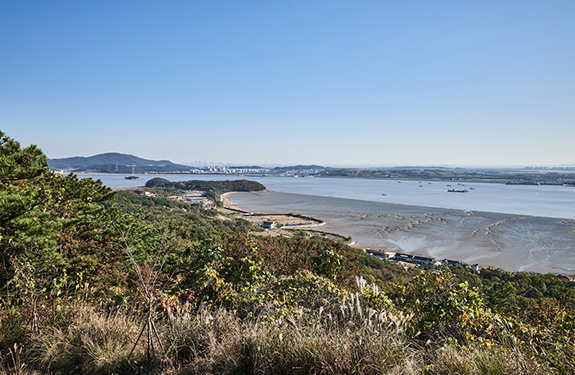 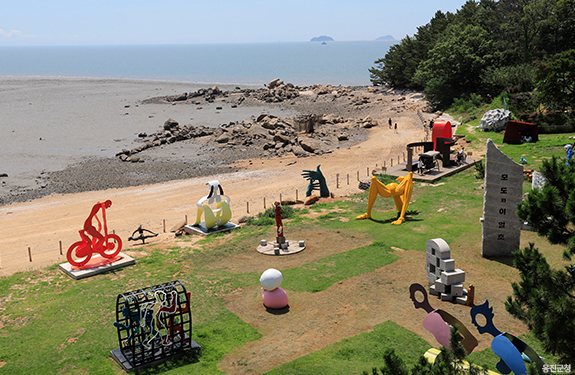 Sindo·Sido·Modo
The three islands of Sindo, Sido, and Modo are connected by bridge, which makes accessable to travel from one another. You can get to the Sindo pier in 10 minutes by small ferry from Sammok pier, next to Incheon International Airport on Yeongjong-do Island. It takes about 16km to tour the three islands along the main road without having to worry about busy streets of traffic. It’s the perfect place to try your first bike tour. It is one of the famous bike trails in Korea, and even if you do not bring your bike, it’s easy to rent a bike near the wharf.

It's good to enjoy the cool breeze while riding, then park your bike for a while and slowly explore the island's attractions. The top of Gubongsan Mountain in Sindo has a beautiful view. Sugi Beach in Sido is famous as the filming location for the TV drama "Full House", with a small quiet beach and a well-structured coastline leading to the island's observation deck. In addition, the Baemikkumi Sculpture Park, which represents Modo, is a good place to take pictures with various sculptures displayed in the background in the garden and along the coast.
Trekking 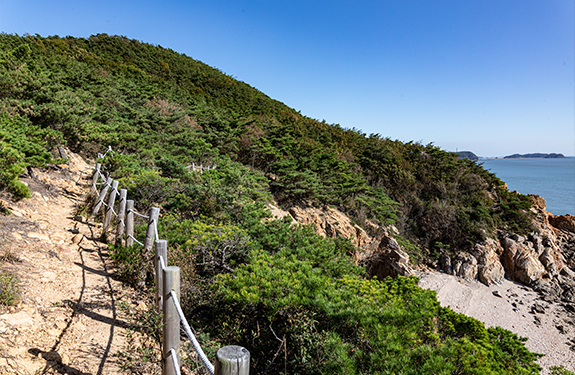 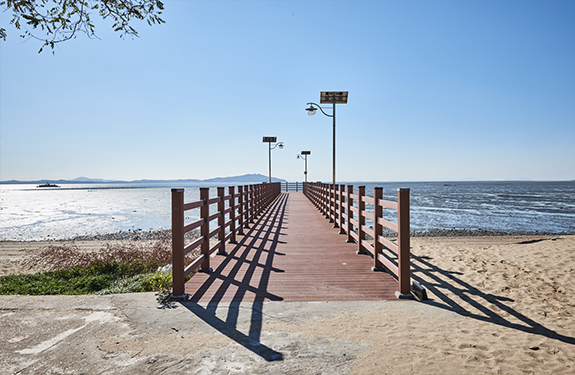 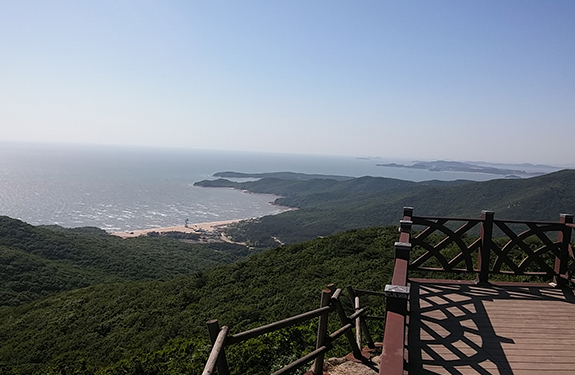 Jangbongdo Island
The name ‘Jangbongdo Island’ originated from its long shape and many mountain peaks. It takes about 40 minutes by ferry from the Sammok pier in Yeongjongdo-Island, where the Incheon International Airport is located. Gaeti-gil on Jangbongdo Island earned fame for its seven different coastal trails with wonderful scenery. Gaetti-gil is originated from the pure Korean, ‘Gaetti’ meaning the ‘trekking trail around an island between the mud flats’ that are revealed twice a day at low tide. You can select and tour the Dulle-gil according to the time required and the difficulty level, and walk along the ridges and shores to meet the beautiful scenery of Jangbongdo's forests and the sea. You can go for a walk around the island to see the “mermaid statue” that symbolizes Jangbongdo Island, and sit at a pavilion at Mulgot to enjoy the panoramic scenery. In the Tourist Center, located in front of the Jangbongdo marina, tourists can get a cup of coffee on the 2nd floor café and get some information about traveling around the Jangbongdo Island.
Muuido Island and Somuuido Island
Muuido is an island that can be accessed by car via Muui Bridge without taking a boat. Nearby are two smaller islands, Silmido Island and Somuuido Island. In the past, small boats were used to go from Muuido Island to Somuuido Island but the two islands are currently connected by a bridge so visitors can reach Somuuido after a 10-15 minute walk. The MuuiBadaNuri-gil consists of 8 routes: from a small village landscape to a seaside road. It takes about an hour to explore and admire the various scenery of the island such as quiet pine forest road. If you want to explore the island briefly, you can take a stroll of Sajabawi Rock, Mangbuseok, and Chongseokjeong Rock along the maritime trail over the sea of Muuido Island.
Wellness & Healing 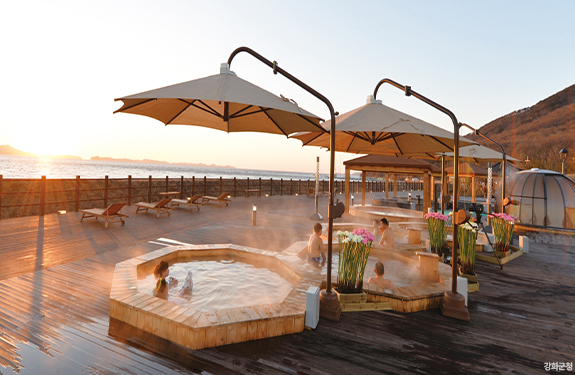 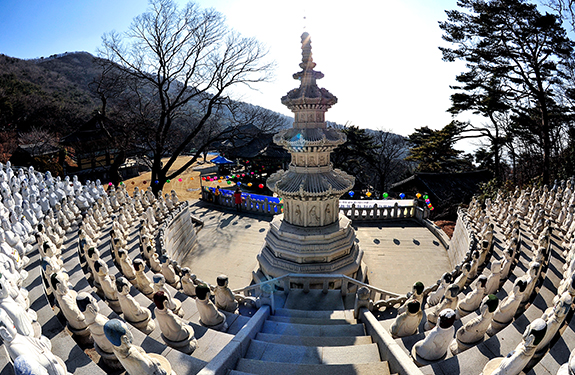 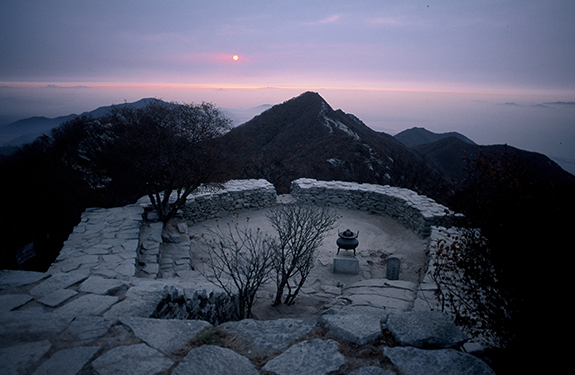 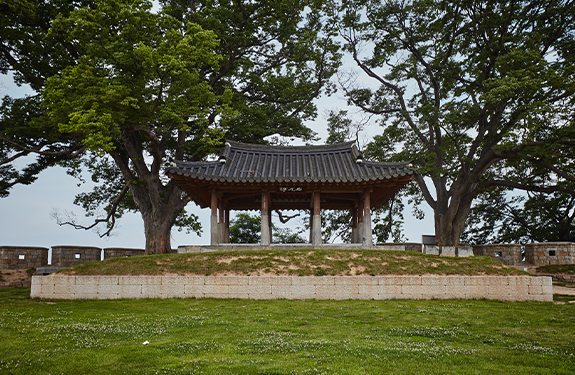 Ganghwa Island
Ganghwa Island, the representative island of Incheon, has been loved for a long time due to the abundance of things to see and do. Most of all, it can be easily accessed from the metropolitan area, and it is good traveling along the east, west, north and south coastal roads of the island. Among them, in the northern coastal road is Goryeo Cheondo Park, which contains the story of Yeonmijeong pavilion and moving the seat of government of Goryeo dynasty. If you move along the western coastal road, you will encounter Manisan mountain, Oepo Port, and Seokmodo Island, which recently built healing forests and children's playgrounds. On the southern coastal road, you can enjoy the Ganghwa tidal flat, one of the world's five largest tidal flats, and the eastern coastal road is great for driving along the beautiful scenery where different flowers bloom in every season.
Seokmodo
Seokmodo Island, connected to Ganghwado through Seokmodaegyo Bridge, is an outing spot where citizens of the metropolitan area frequently visit. Minmeoru Beach, Bomunsa Temple, and the drive courses are famous. There are also healing spots such as the mineral hot spring with a famous open-air bath overlooking the sea, and a natural recreational forest that combines the west sea and green forest. So if you want a comfortable breakaway from the busy daily life, you can enjoy a comfortable trip in the forest, spa and nature of Seokmodo Island. In addition, there is a café with an ocean view, as well as accommodation facilities with beautiful interiors such as Aramir and Largoville, so it is good for a one-night trip or more.
Peace Tourism 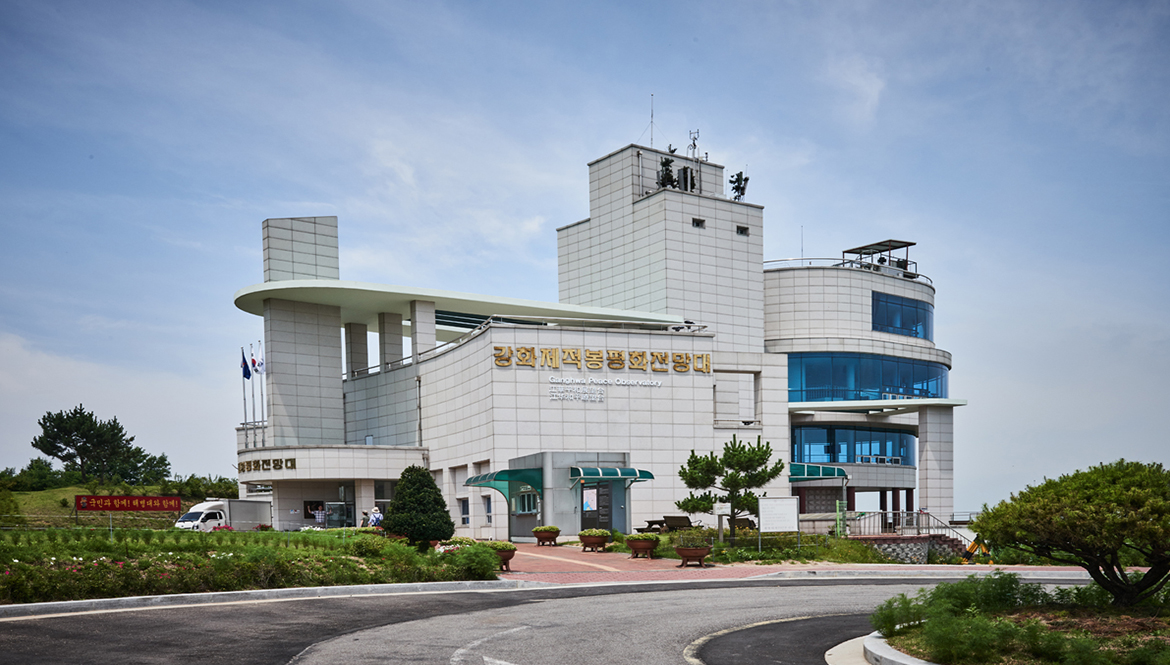 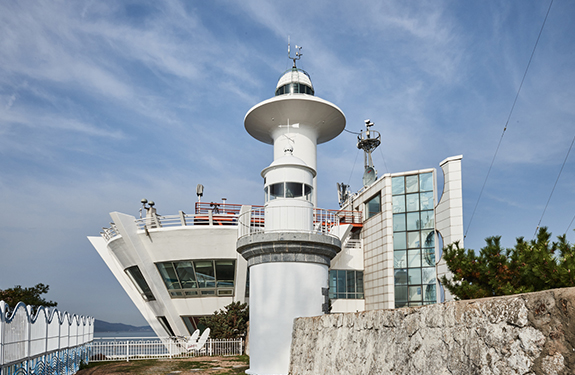 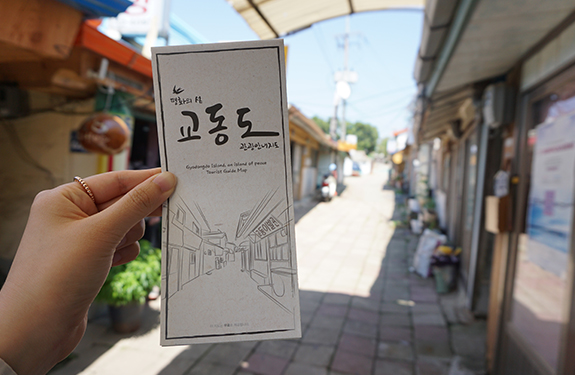 Ganghwa Island
The Ganghwa Peace Observatory was opened in 2008 as a place where you can see North Korea area at the nearest distance from South Korea. It is so close that people can see the Yeseong River in front, Yeonbaek Plain to the left, and Songak Mountain to the right. The observatory is equipped with facilities such as a monument of hope for reunification to soothe separated families and pray for reunification, an exhibition room for war-related materials, a viewing room where you can see North Korea area and residents, and an outdoor observatory.
Gyodong Island
Gyodongdo Island is located northwest of the larger Ganghwado Island, and was made more accessible with the opening of Gyodongdaegyo Bridge in July 2014. Some of the below attractions are popular spot in gyodong-do island. Daeryong Market is an alleyway market decorated with colorful murals and statues and still has long-standing shops such as coffee shops, tailor shops, drugstores and barber shops inspiring nostalgia. Manghyangdae Memorial is a gathering place for refugees who fled from the nearby Hwanghaedo(North Korea area) during the Korean War. The ‘Peace Trail’ is a biking path around the island. At Gyodong Studio , visitors can put on old school uniforms and take black-and-white photographs. It is popular as a memory-filled travel destination for the elderly and a vintage travel destination for the younger generation.
Palmido Island
Palmido Island was the first battleground for the Incheon Landing Operation during the Korean War and a special island with Korea's first modern lighthouse built in 1903. As it was designated as a military protected area, public access was not allowed until 2008, so the beautiful natural scenery is still well preserved. Currently, you can reach the island by taking a Palmido cruise ship from the Incheon coastal pier for about 50 minutes to 1 hour, and as soon as you arrive at the island, you will notice the new lighthouse built in 2003 and the two lighthouses standing side by side. Palmido Island is good for walking and exploring the island’s dulle-gil, which is well-preserved, searching for the symbolic and historical meaning of the island.