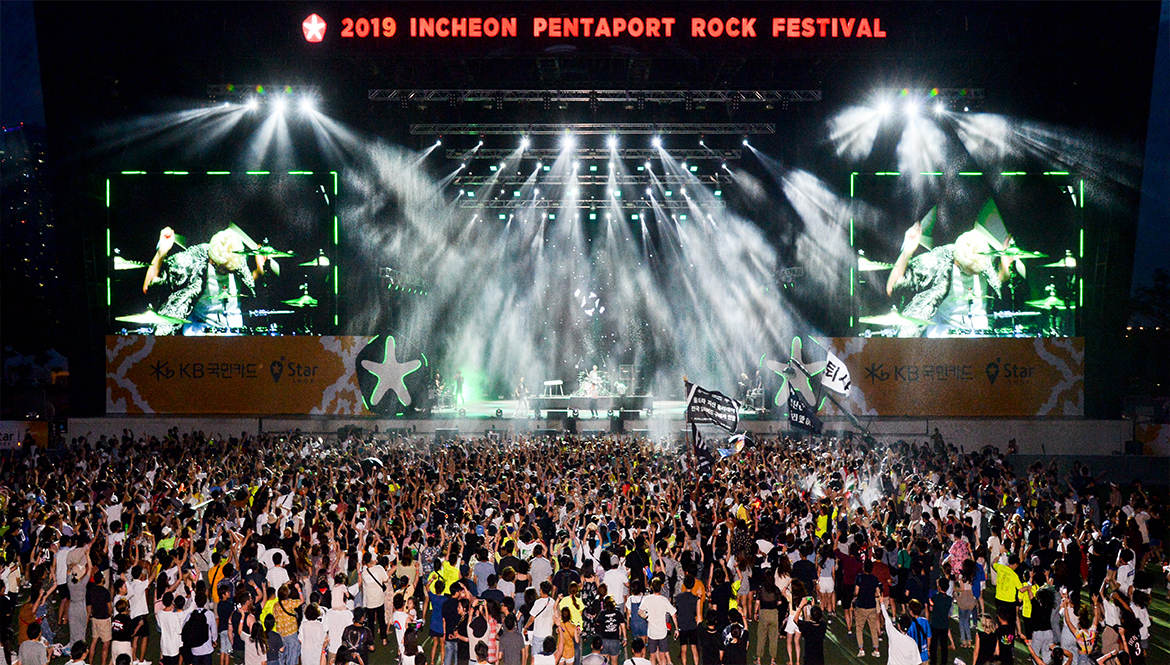 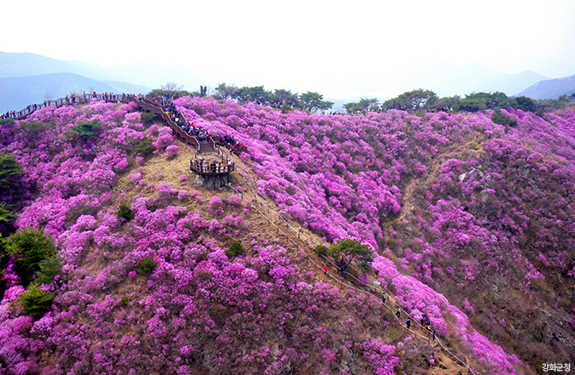 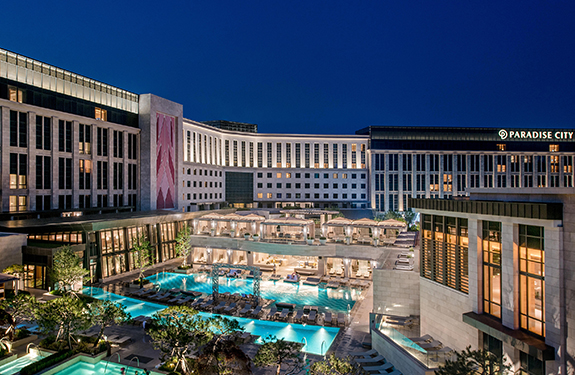 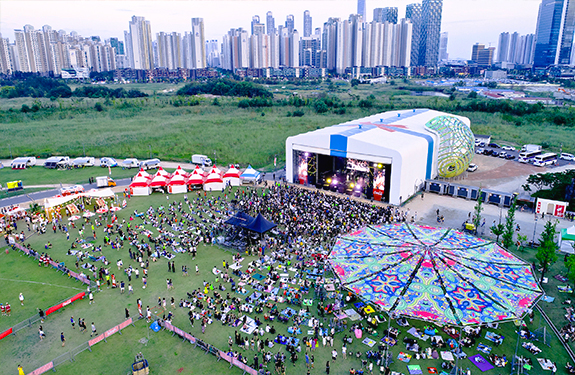 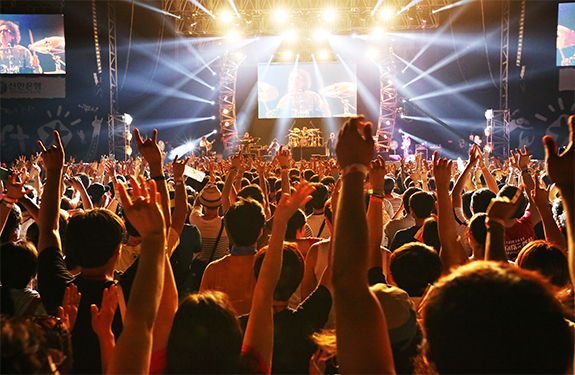 Incheon Pentaport Rock Festival
Incheon Pentaport music festival started in 2006 and takes place every year in the beginning of August, holding history and tradition of Korea’s representative outdoor rock festivals. Recently chosen by the Ministry of Culture, Sports and Tourism as a cultural and touristic festival, and the UK Time Out magazine as 8th place of the top 50 festivals around the world. Every year with a great line up and passionate performances that make fans’ heart flutter, it is indeed a great festival. In the hot august summer, Incheon Pentaport music festival will make all your stress and heat disappear with great music. 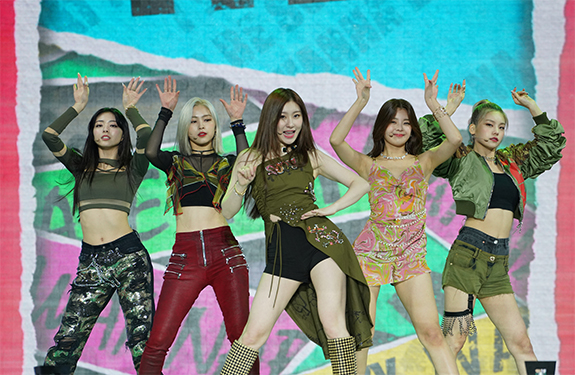 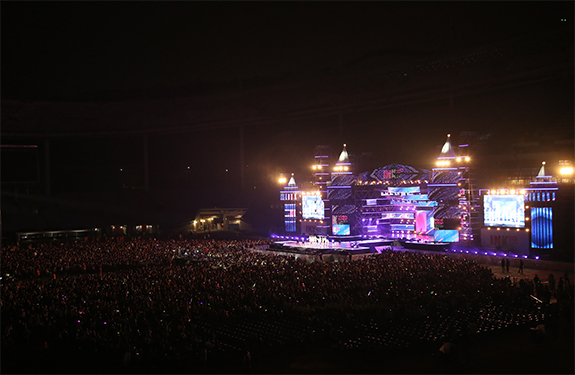 INK Concert
INK concert is the short form of Incheon K-pop concert, where the best kpop stars get together to represent Korea’s Hallyu in a concert. INK concert is not only about Kpop but also K-beauty, K-food, K-fashion all together in one concert where around 40,000 fans gather from Korea and around the world. With different events, the Korean Wave, Incheon’s tourist attractions and cultural contents can be promoted to the world through INK concert. 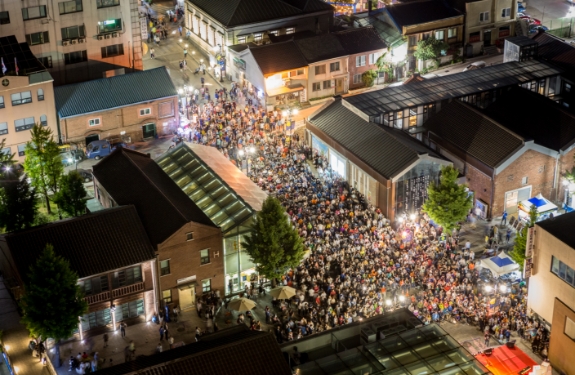 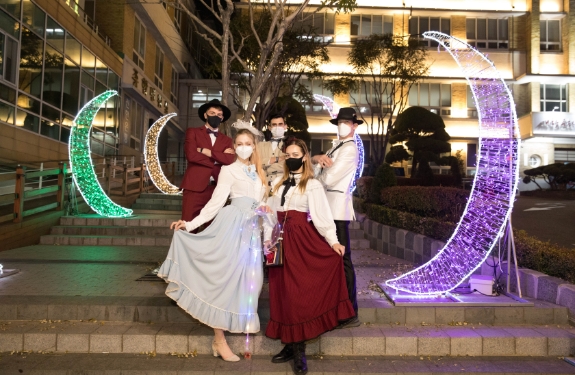 Incheon Open Port Culture Night Festival
Carrying more than 130 years of history, Korea’s modernization started at Incheon port, introducing western culture and other new cultures. There are still traces of the old and contemporary history here and there. When the season allows you can enjoy walking around the port for a nice night when the ‘Incheon port culture night festival’ opens up. During the festival, the port’s great cultural assets offer a variety of activities and attractions, things to eat and enjoy everywhere. The cultural tourism center organizes a historical walking tour, cultural activities, outdoor performances… citizens can participate in a lot of different programs. During the festival cultural facilities operate at night for free, with beautiful lights for a romantic trip that will make great memories for everyone. 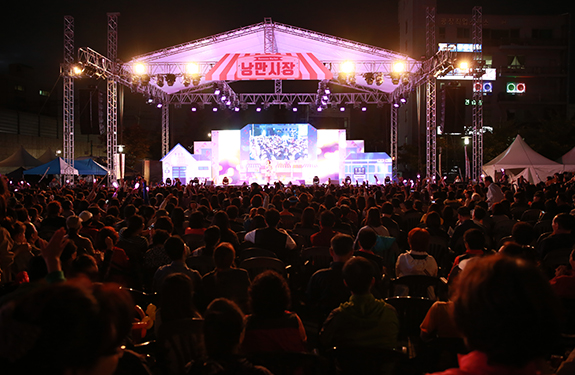 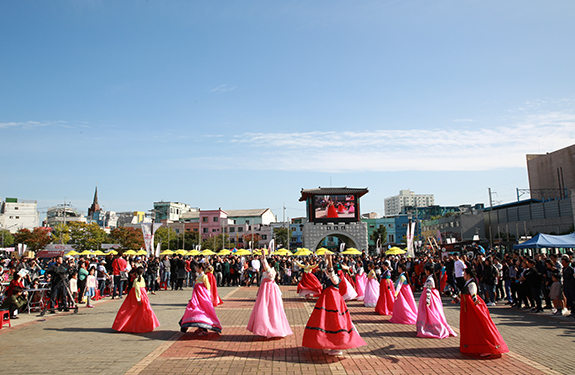 Dong Incheon ROMANCE MARKET
Dongincheon is Incheon's largest downtown area where markets, theaters, and shopping centers were concentrated from the 1960s to the 1980s, where culture and history coexisted. The Dongincheon Romantic Market is a festival planned and made with local merchants in a way of reminiscent of the past. At the North Plaza of Dongincheon Station, local residents and Incheon citizens come together at places filled with memories such as Songhyeon Market, Jungang Market, Baedari Craft Shopping Center, Dong-gu Art Market, and Memories Theater Mirim, to create a festival with a new Newtro concept. At the Dong-Incheon Romantic Market, you can reexperience the hot moments of glory of Dong-Incheon through various programs and performances that recreate the romance of those days.
Incheon famous regional festivals
Seasonal festivals you can meet through different programs 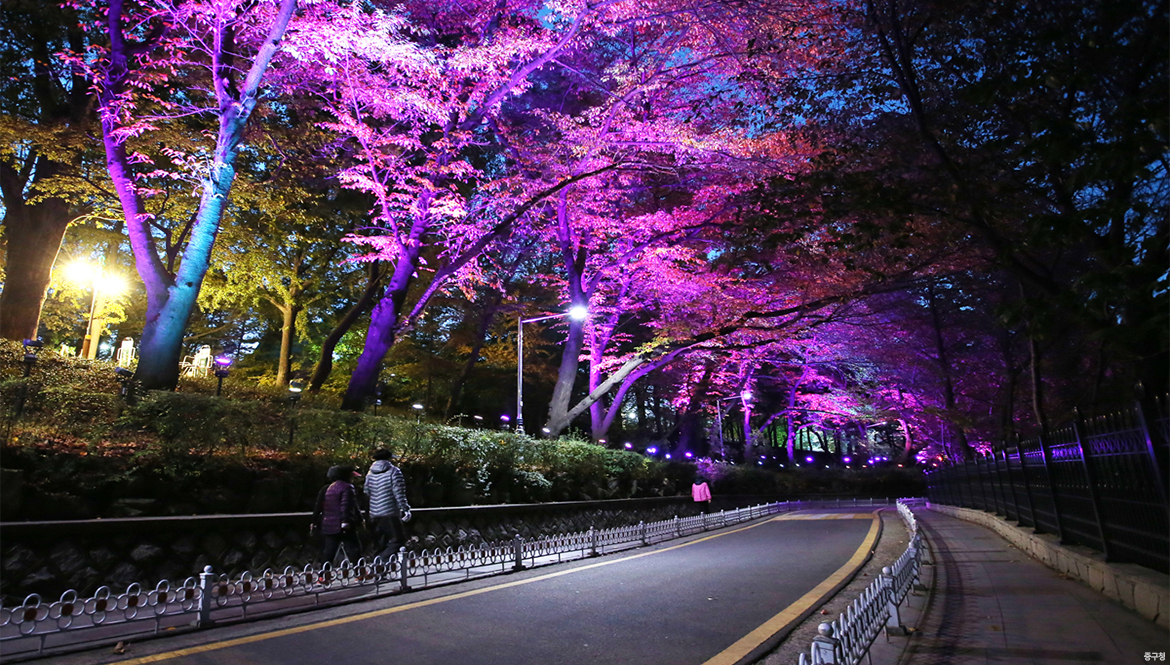 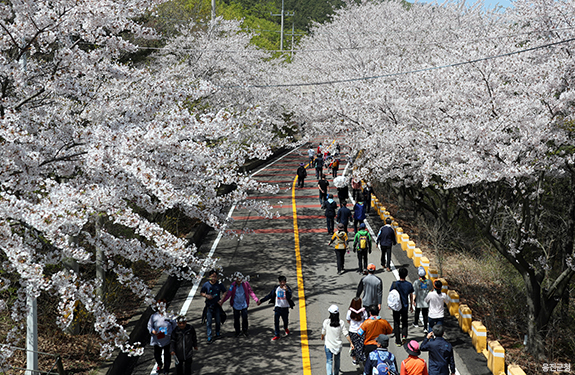 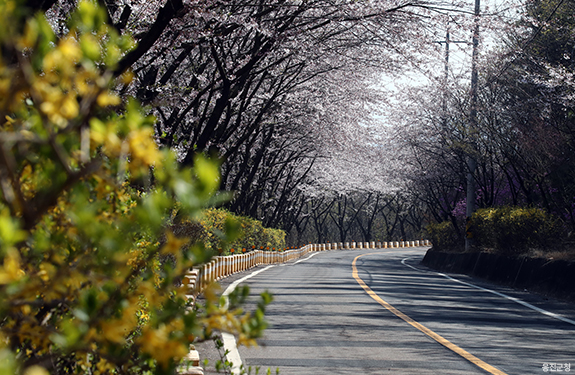 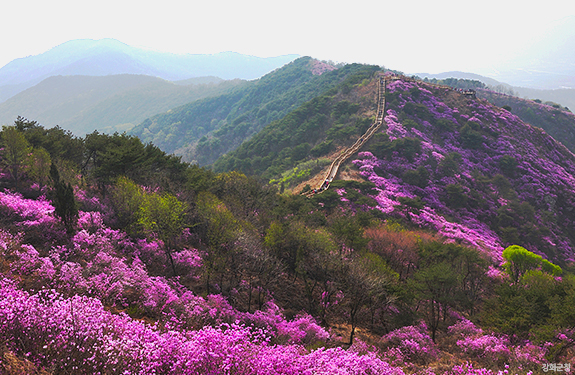 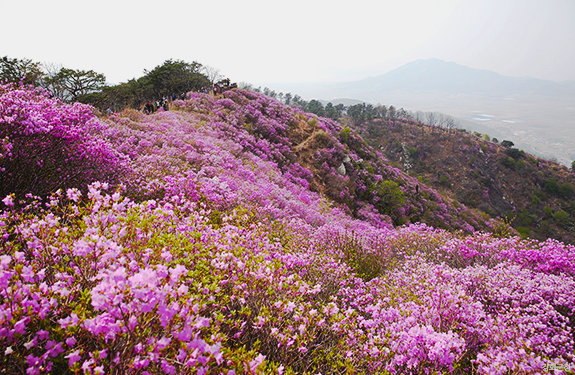 Hwadojin festival (Dong-gu)
It is said that Hwadojin was established in the late Joseon Dynasty during the reign of King Gojong in preparation for the intrusion of the Western ships, and about 70 to 80 soldiers were stationed there. Also, in May 1882, it was the historical site where Korea signed the first amity and trade agreement with the United States. Hwadojin festival is held every May amidst azaleas in full bloom. The festival features reenactments of signing of the agreement, the Eoyeongdaejang(Royal guards) procession, traditional performances such as tightrope walking mask dance, as well as various traditional games and cultural experience programs held in the Donghyeon Madang.
Goryeosan Azelea Festival(Ganghwa)
Goryeosan is popular among citizens of the metropolitan area as a place to hike and enjoy spring flowers. In April, more than 400,000 people come to the mountain to breathe in the fresh air and see the pink azaleas blooming on the top of the hills. Photographers love the beautiful image of the entire mountain covered with pink azaleas in full bloom. During the festival, various experience events are held near the mountain. In particular, along the well-maintained historical tour course, you can explore temples such as Baeknyeonsa and Jeokseoksa, the dolmen square, cultural assets such as Oryunji, Hongneung, and even the North Korean sky from across the river. 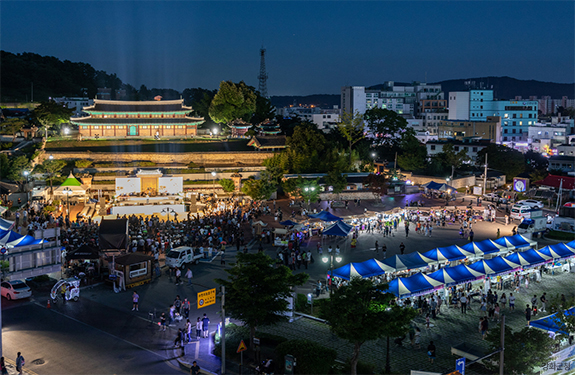 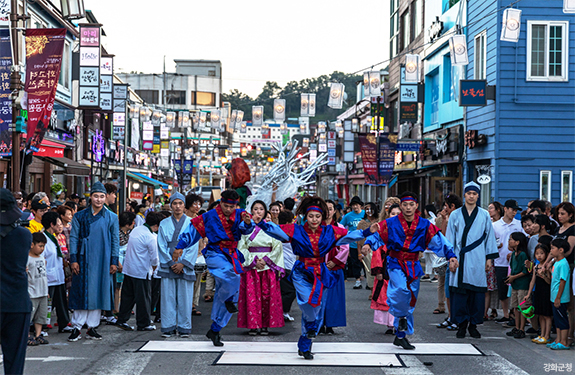 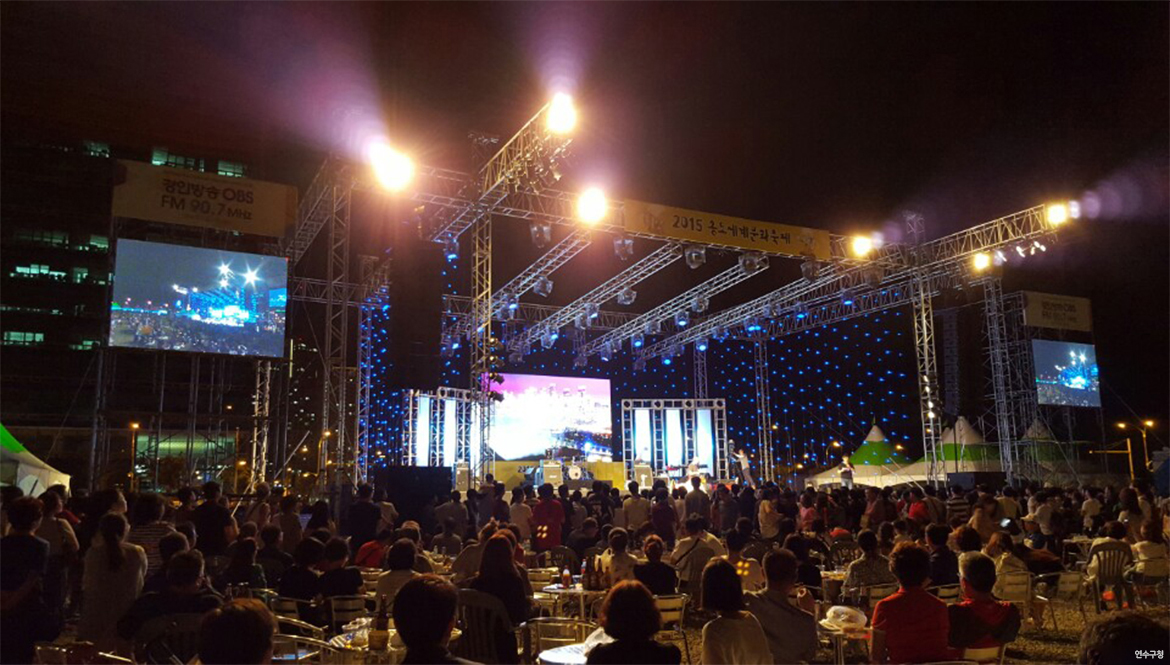 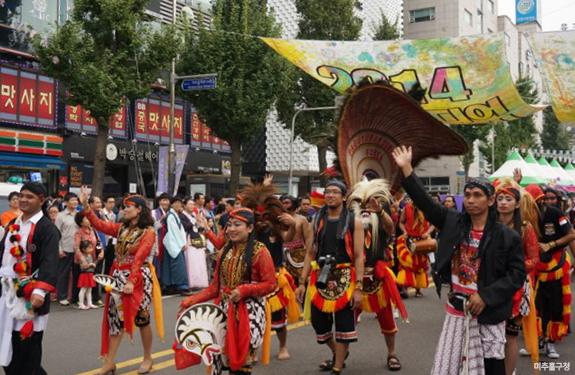 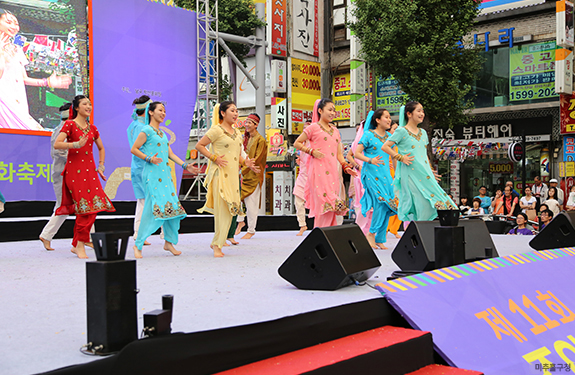 Songdo Beer Festival (Yeongsu-gu)
Songdo Beer Festival is a regional festival where you can experience beer from all over the world and is held every year between the end of August and the beginning of September at the Songdo International City Moonlight Festival Park. Started in 2011 to create a festival where beer meets culture, beer tastings from around the world, various music festivals with leading domestic and international singers are also held. You can enjoy a leisurely festival with a mat and tent spread out, so it's great for a light picnic with family, friends, and couples. With a glass of cold beer to enjoy with the wonderful night view of Songdo, you can make wonderful memories on a summer night at the Songdo Beer Festival.
Juan Media Festival (Michuhol-gu)
In Michuhol-gu, Incheon, every September, a media based cultural festival is held. The festival started in 2004 with the theme “digitalk,” and has continued the festival every year leading the development of the region and promotion of media culture. The festival is held for three days in the former Citizen Center's shelter area, and citizens can naturally participate and enjoy the festival thanks to the diverse contents planned and created by the youth and residents who lead the future of cultural creation. 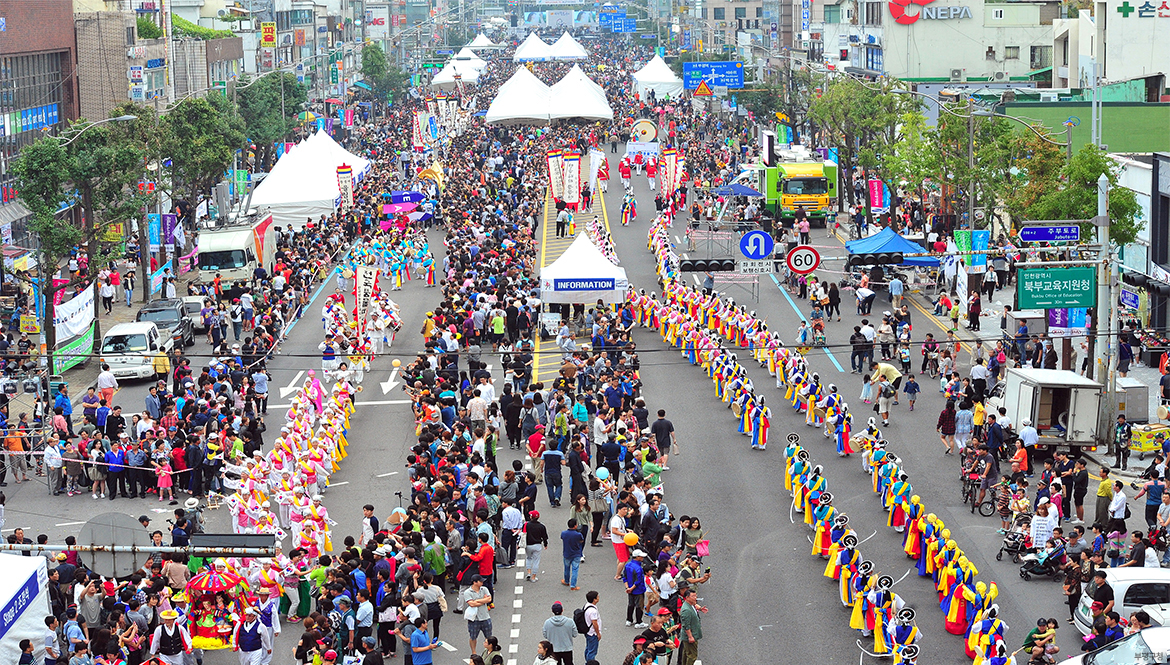 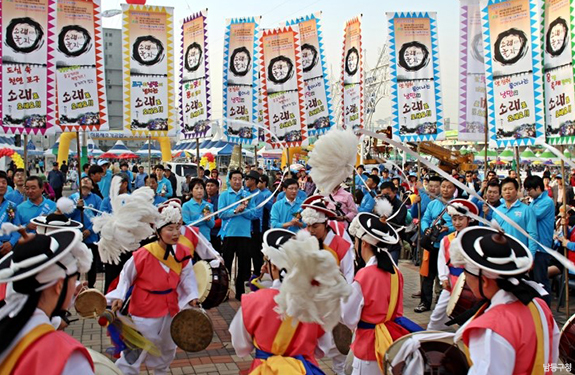 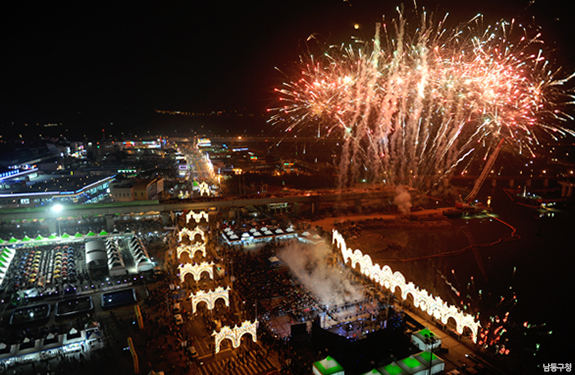 Bupyeong Pungmul Festival (Bupyeong-gu)
Bupyeong is the place where agricultural culture began. Naturally, pungmul(farmer’s music) also took root and now both are celebrated at the Bupyeong Pungmul Festival, which is held on the threshold of autumn. During the festival, the streets of Bupyeong city become a huge stage, and creative performances are held on the performance section, busking and parades are held in the streets, and various programs and events, including pungmul nori, are held in the experience section. Throughout the festival period, cheerful sound of pungmul fills the streets, colorful flags of five colors fly, and the area of Bupyeong-gu transforms into a place of “exciting” harmony where both performers and citizens become one. The festival reproduces a scene of Bupyeong farming culture and shares the feelings of Pungmul (farmer’s music) with many visitors.
Soraepogu festival (Namdong-gu)
Soraepogu, located in Namdong-gu, Incheon, is a traditional fish market with a history of over 70 years and is famous as a tourist attraction for citizens of the metropolitan area. A festival is held every October at Sorae port, where small and large fishing boats meet, to enjoy the taste and beauty of the sea. The festival begins with the east Coast pungeoje and following events such as concerts. pungmul performance, seafood catching experiences, a food market, and a market place selling agricultural and marine products. If you visit the nearby Sorae Wetland Ecological Park along with the festival, you can also explore the quiet autumn reed fields, salt fields and tidal flats. 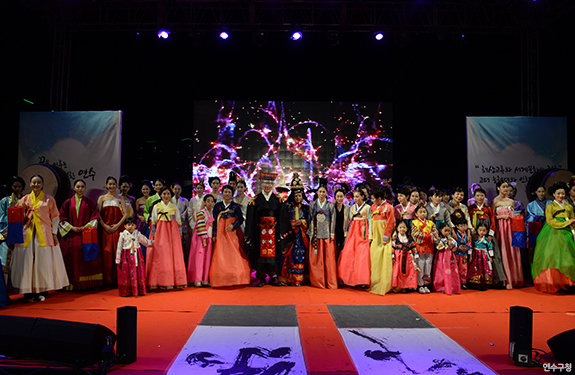 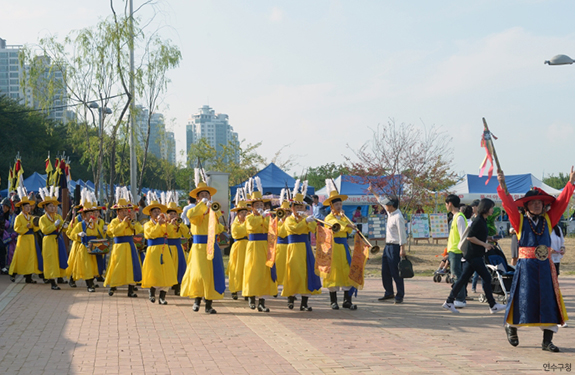 Jeongseojin sunset festival (Seo-gu)
Jeongdongjin is a sunrise spot located on the east side of Gwanghwamun, and Jeongseojin is a sunset spot located on the west side of Gwanghwamun. Jeongseojin is also the starting point for Gyeongin Ara Waterway. The festival is held at the Jeongseojin Plaza, a famous sunset spot and a meaningful way to end the year. Along with the pre-ceremony performance, various other events such as sunset countdown, concerts, blowing lanterns, and fireworks are also held. Thanks to the beautiful and mystical sunset view and the sunset bells, the symbol of Jeongseojin, it has become a popular attraction.
Yeonsu Neungheodae Culture Festival (Yeonsu-gu)
Neungheodae was the departure point where Baekje envoys departed from to exchange with China in the 4th century. The festival is held in the cultural park and Neungheodae Park in the area where the bravery of Baekje envoys live on. Various events, performances, and experiences are held, and the highlight of the festival is the reproduction of the Baekje envoy procession. This performance, with the participation of residents dressed up as the cavalry, generals, envoy line, horsemen, chwita, and pungmuldan, commemorates the courageous spirit of the Baekje envoys, who went through the harsh west sea.